By Doug March 14, 2017
While seeing such things as manufactured homes and wind power turbines may be a common sight on the highways and byways, seeing an old, historic New England church being moved on a road would probably cause you to do a double take. After all, it's not often that you're driving down the road and you see a church moving along on a truck in the opposite direction. A number of years ago, I had received a set of photos from David Slauenwhite that he took back in October 1985 of a church being moved from Orange, Massachusetts to New Salem, Massachusetts. The church was actually moved once before, from the former town of Prescott, Massachusetts as a result of the creation of the Quabbin Reservoir. As you can tell, it was quite the popular church that day, with curious bystanders checking out the church. 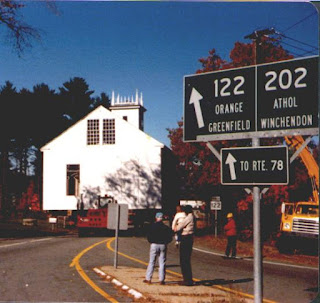 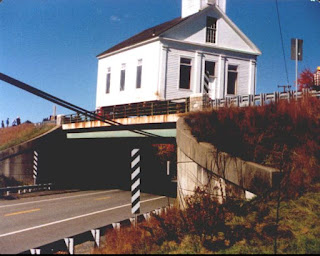 Today, the church is now known as the Prescott Museum and is part of the Swift River Museum located in North New Salem, Massachusetts, a collection of historic buildings and artifacts from the former towns that are now part of the Quabbin Reservoir lands.