By Bob Malme July 21, 2010
MassDOT's Highway Division currently has several highway sign replacement projects going on. In the Boston area, these involve I-95 (128) between US 3 in Burlington and I-93 in Woburn, MA 2 between Concord and the end of the freeway in Cambridge, and along I-93 south of the city from Columbia Road (Exit 15) to MA 24 (Exit 4). I didn't make it to that I-95 section, other than new mile markers, there was little changed on I-93. But I did capture photos of some of the new MA 2 signage going westbound: 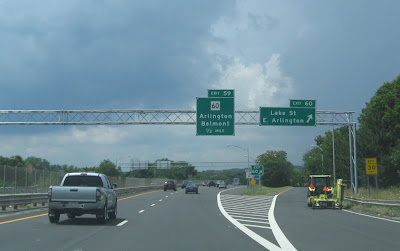 Here's examples of the first new signage heading westbound, just beyond the Alewife MBTA station and garage, route shields and sign design with line under exit tab match current Mass DOT practice. For those unfamiliar with MA Route 2, it travels from Boston to the NY state line. The exit numbers run from I-91 eastward. The route is not all freeway, so exit numbers are assigned in the gaps to intersections that could be exits, if the road were a freeway. This leaves gaps in the 'consecutive' numbers along the route and is another argument for a milepost based system. The standard large MA state shield seen above, in closeup below: 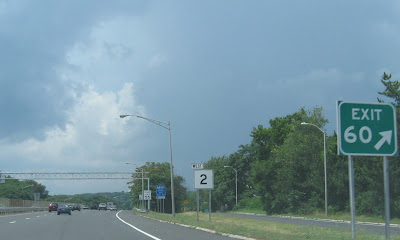 You would think that the directional banner is misplaced atop the route shield, that it should be flush with the left side, not extending outward. But this is standard MassDOT, and before that MassHighway, practice for these signs. The following shows another new feature on Mass. freeways, 2/10 mileposts with route shields on the whole mile markers: 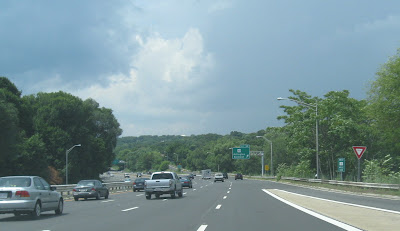 This milepost reads 134, which the MA 60 exit (and probably the exit before and after) would be numbered under a milepost system.
The following sign was either not changed, or failed to get the line under the exit tab: 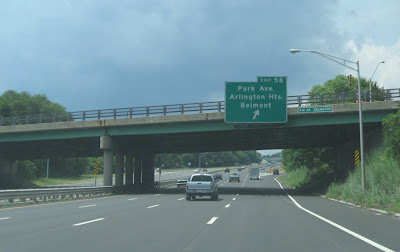 The following photo is taken going up the hill from Belmont into Lexington. It again shows another huge MA 2 shield with leading directional banner. This hill not only has a great view of Boston heading eastbound, but is the result of crossing the geologic boundary between the Boston Basin formation, and the bedrock lying under the rest of Massachusetts. The Basin had much younger and mostly sedimentary rocks. So when the ice age came, glaciers scooped more material out of the basin, than from the surrounding area, leaving what would become Boston at a lower elevation. Much of this lowland was then flooded after the ice melted, creating Boston Harbor and its surrounding bays: 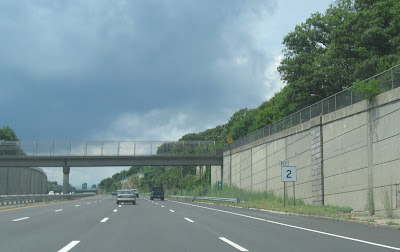 But enough geology, back to the road signage. Here again are typical new Mass. highway signs: 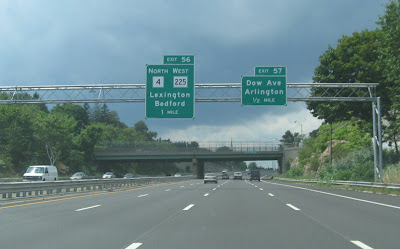 Notice the MUTCD compliant large letters for directions, however the new signs do not have the Clearview lettering recommended in the new manual, not that I'm complaining. It's not the first time MassDOT and its predecessors have ignored some of the MUTCD directives.

We are now approaching the I-95 interchange: 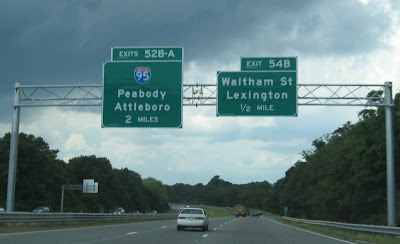 If you look closely at the I-95 exit tab, below where it says EXITS, there appears to be a line text. Zooming in it turns out to be a line of numbers. There's another one on the bottom of the exit sign too, and on all other tabs and signs I have photos of above, it turns out. The MassDOT spokesman who answered my inquiry about mileage based exits said they had a system in place to rapidly change the numbers if required by the FHWA, are these numbers part of that system?

Now a mile from I-95. If you think it looks like it might rain soon from the above photo: 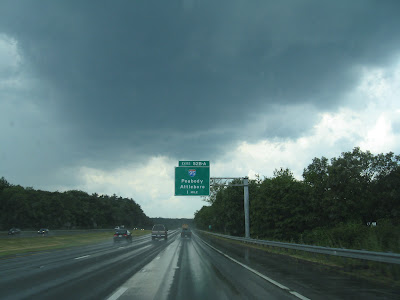 You would be correct. Thus I wasn't able to take any more photos along Route 2. You'll notice that the I-95 overhead exit signs are not accompanied by any ground mounted MA 128 signs, as is customary at other exits. It may be those will be coming when the project is completed, or maybe it's another attempt to remove 128 from the I-95 section, another example of no 128 signs is at the MA 109 exit. Ironically, the mile marker you see in the distance beyond the exit sign is for mile 129, meaning if MA does adopt mile-based exit numbering, the number for the I-95 exits would probably be 128.

Speaking of I-95 and 128. I returned from the trip to Route 2 going south along that route to I-93. The US 1 interchange provided a good comparison between the last two iterations of MA highway signing. The former: 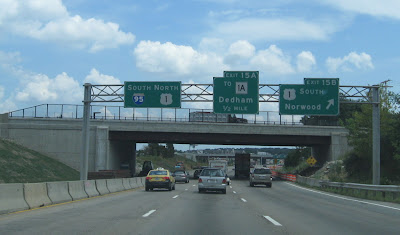 And the latest version, no more button copy interstate numbers: 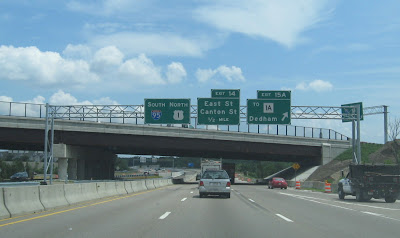 You can also see the exit sign for South I-95/North US 1 on the highway above. This is an older version sign that is accompanied by MA 128 ground signs, one barely visible through the fence.

This sign for the I-93/I-95 split is a vast improvement over what existed before: 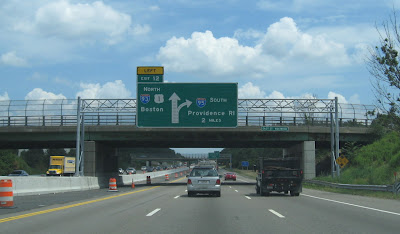 That sign just said 'I-93/I-95, 2 miles.' Here is another view of new signs at the I-93 interchange and the two lane I-95 off-ramp, which has helped with traffic flow: 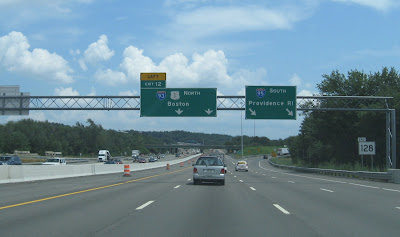 This also shows the new location of the 'End 128' sign, there used to be two following the exit. Not that this has changed any traffic reporter from referring to the rest of the road to Braintree as 128. They moved the 128 signs apparently to make room for a new 'Begin I-93' sign. I saw it too late to take a picture, but here it is, in the lower right corner, from one of MassDOT's traffic cameras: 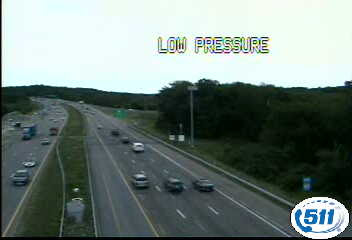 Finally, since I was up visiting my hometown on the 4th of July, I want to note how the town's highway department showed their patriotic spirit: 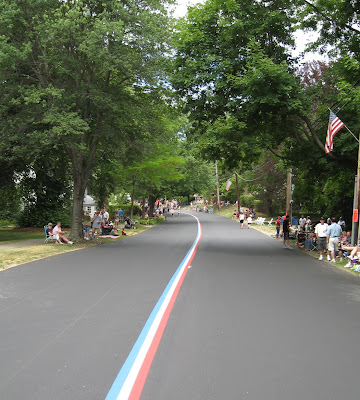 Since the town had only put down one of the two new layers of asphalt on Main Street, part of the parade route, they put down non-MUTCD compliant red, white and blue stripes. Alas, these stripes are to be paved over and replaced by standard two yellow stripes by the end of the month.

Carl said…
These highway signs are bigger ad clearer and I'm sure that every motorists will get to see it more than old road signs.

A friend of mine once told me that road signs nowadays have better government steel strapping structure and stainless steel banding strap so that it will stay longer and it will not fall or break.
10:56 PM