By Bob Malme July 27, 2010
As indicated in the previous post, I found several new areas to observe progress on construction of the 'US 311 Bypass' from Spencer Road to US 220, that I decided to break this report into two parts, and will do the same on my web page later this week.

I. Design-Build Project from Spencer Road to US 220, Due to Open in Late 2012:
A. Spencer Road
This is the beginning of the Design-Build contract won by Barnhill Construction last year. The first photo looks back at the end of the previous contract: 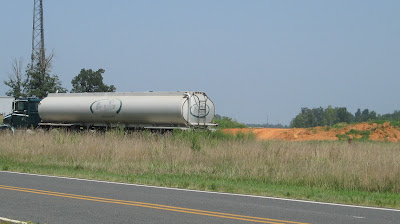 The water truck is there I believe to water the cleared roadbeds to prevent too much dust from blowing around. Believe me, it happens, Weekend watering, I guess, is not in the contract.
The photo below looks south from Spencer Road, showing some clearing having gone on in the distance, but not near Spencer Road... 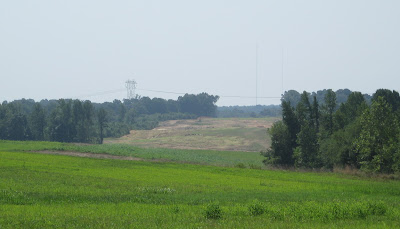 But, it appears this will not be the case for long... 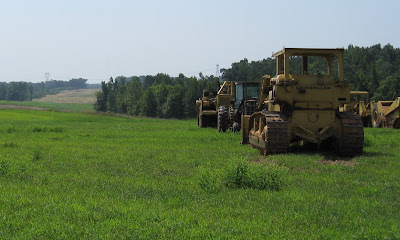 There were at least 8 earth moving vehicles parked just to the south of the road, ready to start digging.

B. Banner Whitehead Road
This is one of the three new sites suggested to me to check out. Approaching the construction zone, one doesn't see any work going on immediately: 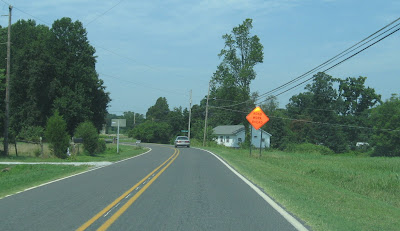 However, where the freeway will cross, I assume over the road, you can see clearing going on to the right, heading back towards US 311: 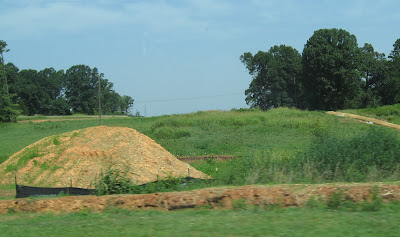 And demolition going on to the left side of the road: 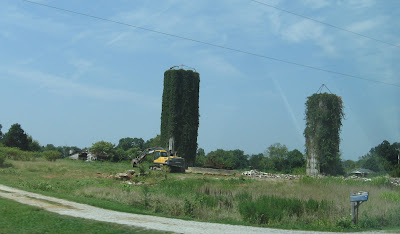 The road, heading south on 311, is a left just before the 311 Flea Market complex (what are they going to change the name too?)

C. Current US 311 Interchange
They are making good progress on the road bridge, but need to do something about the railroad tracks too. Here's the latest view entering the construction area for the bridge and interchange, parts of the new bridge can be seen in the center of the photo: 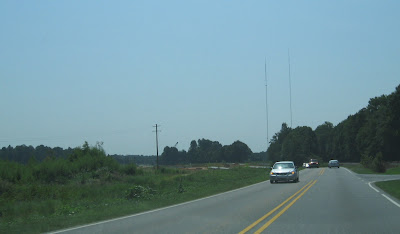 As one gets closer, one can clearly now see the new roadbed being built to access the bridge: 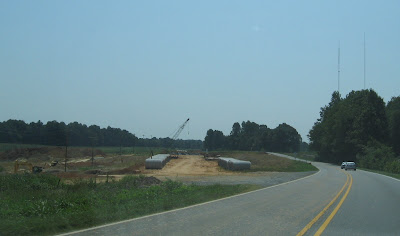 Here's a quick view, while driving by, of the progress building the bridge itself: 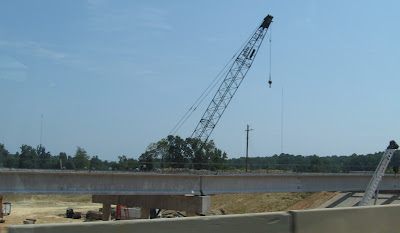 This final photo shows where the new alignment will meet the current roadway. 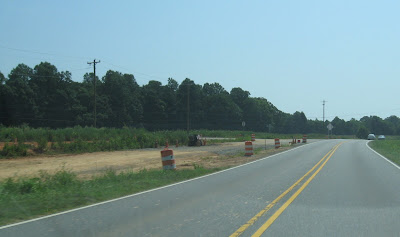 The intersection ahead on the left marks where the westbound I-74 on and off ramps will be located, the eastbound, before the bridge, will also both be north of the current US 311 because of the railroad right-of-way on the other side of the highway.

D. Plainfield Road
Another of the new locations. Here they are clearing and excavating so that a bridge can be built for the road over the freeway. They have already put in a temporary road so that the bridge construction and excavation can begin and traffic on the road maintained: 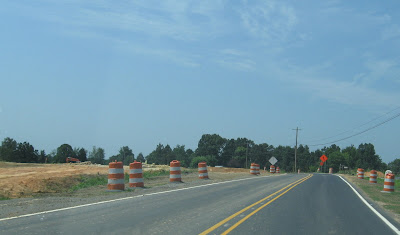 Clearing has gone on mostly too the south, where both the future freeway bed and the construction vehicle access road (on the right) can be seen: 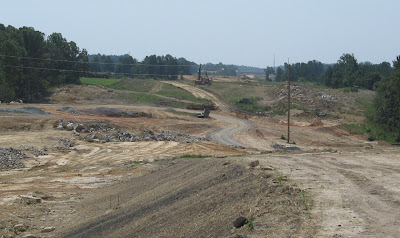 The clearing goes all the way to Heath Dairy Road, our next stop, whose bridge you can barely make out in the distance. They are making progress in excavating for the bridge here as well: 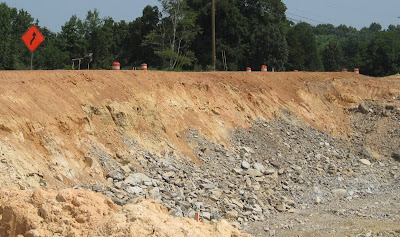 The excavation is almost up to the temporary road itself. Hopefully they will stabilize the area before the next big thunderstorm. 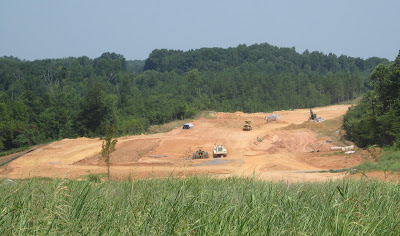 As for the building of the bridge here, it must have been the first to be designed, because it looks mostly complete: 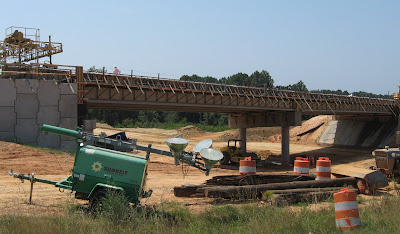 It appears that only the road deck and sides need to be completed, notice there are construction workers here even on a 95 degree Sunday. The next photo looks at the view under the bridge: 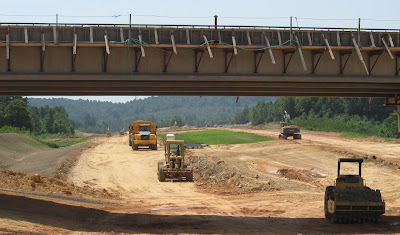 This is looking southeast toward the US 220 interchange, the roadbed appears to have been cleared all the way between the two locations. There still needs to be some progress on aligning the old road with the new bridge. This is the view on the east side: 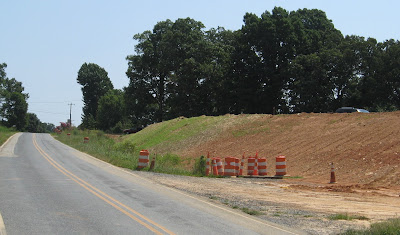 While this is the view looking at the west end of what will be the new roadway: 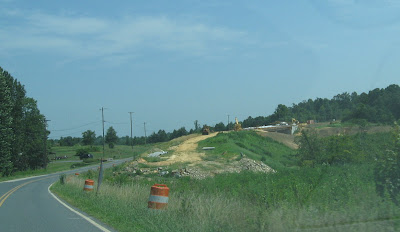 F. The US 220 Interchange
More progress had been made in the last month than was seen in June. Approaching the construction zone from the south: 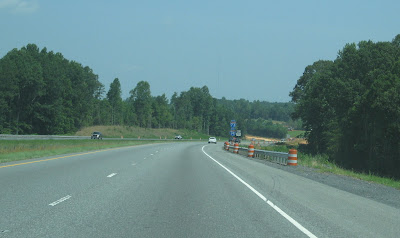 One can see progress in making the ramp that will carry I-74 West traffic: 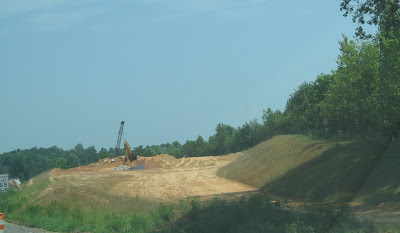 Also some progress can be seen on the ramp bridge along the east side: 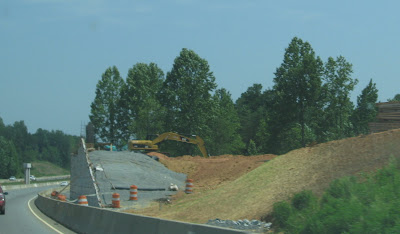 Approaching on US 220 South, progress is seen on the sides of the two ramp bridges: 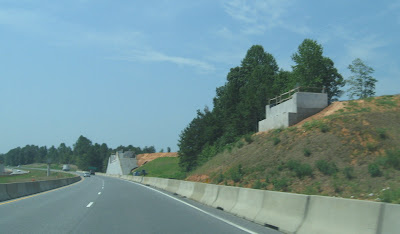 Here's a closeup of the second bridge siding and the grading up to it: 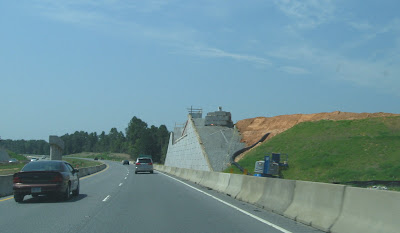 A wider view of progress along US 220 North can be seen from the southbound lanes: 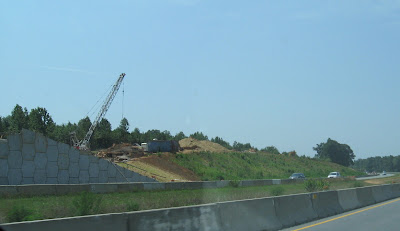 It doesn't appear support beams for any of the bridges will be installed very soon. Probably not by my next blog entry on the I-74/US 311 freeway, which will either be in late August or early September.