By Adam July 31, 2010
On the Top Ten Places I enjoy going to the most, you would find Kennywood Park in Pittsburgh. I was fortunate to have grown up a 25 minute drive from the park, and after years of going on school picnics, marching in fall fantasy parades in high school and college, you can easily take the park for granted.  It wasn't until I moved to North Carolina that I truly realized how special a place Kennywood is.

On this trip to PA, my mom, dad, Maggie and I went to the park.  This was Maggie's first visit to the park, and the first time for me since 2002.    We got to the park at around 2 p.m. beginning a memorable day at the park!

Kennywood, in operation since 1898, is one of the oldest amusement parks in the country.  Home to five roller coasters, which includes three classic wooden coasters, Kennywood is a roller coaster enthusiast's playground.

The entrance facade of the Racer is designed to resemble how it looked in the 1920s.  It's one of my favorite rides. 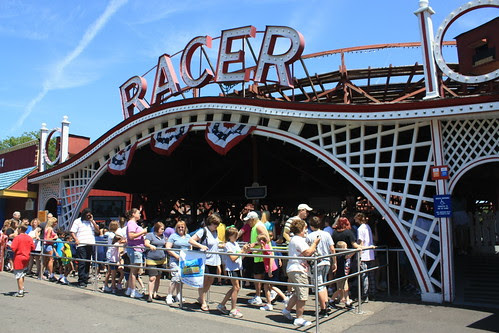 The best part of the Racer is that for nearly all of the ride you are running side by side with the other train and slapping five with the riders of the competing train as you go by.  For the day, I was 2-1 on the Racer.

Next, is the Jack Rabbit and the famous 'Double Dip'.  The Jack Rabbit has been in the park since 1921, the famous double dip gives you the feeling that you are flying out of your coaster seat.  You're not.  But the air time you get is a great feeling, and is one you will never forget when thinking of this ride. 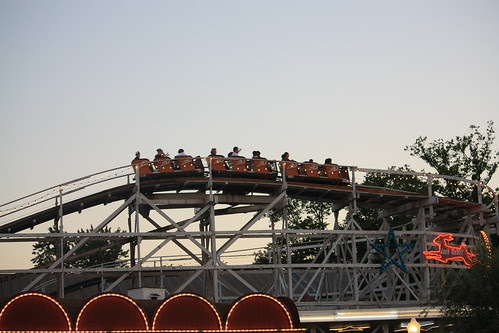 Before we head on the Thunderbolt, let's stop and have some of Kennywood's Famous Potato Patch Fries. 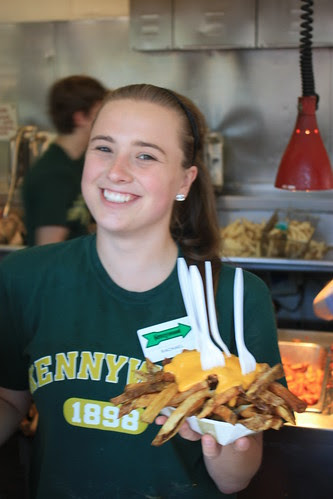 Mmmm Potato Patch fries, with you choice of toppings - cheese, salt, bbq salt, vinegar, bacon, garlic salt, and I know I've forgotten one or two others, are so good that the lines for the fries are sometimes longer than wait lines for the rides within the park! 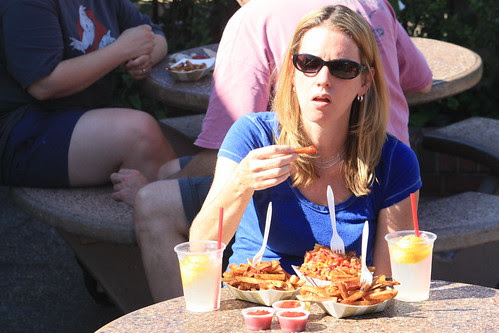 You think the lady above has more than enough? 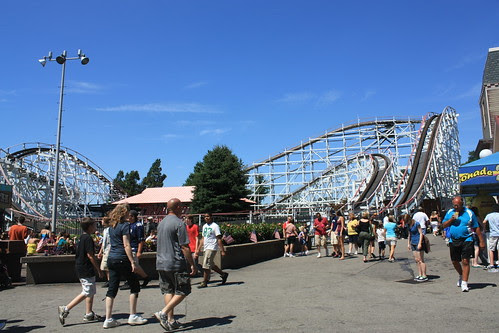 There are a number of unique features that make the Thunderbolt special.  First, unlike many coasters where you start with an uphill hill climb (often with help of a pull chain), the Thunderbolt leaves the loading station and immediately drops into a wooden ravine.  From this point, the adrenaline rush continues.  Two helix curves at a speed of nearly 55 miles per hour are the lasting memories of this ride.  It's hard to describe the excitement this ride brings - so I'll let the next few photos do the talking. 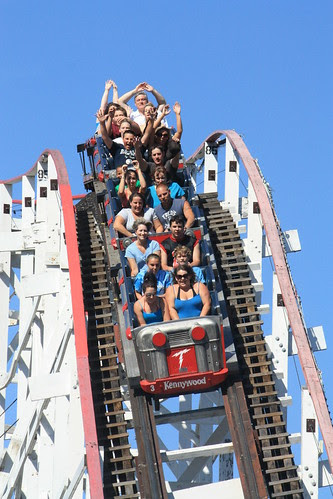 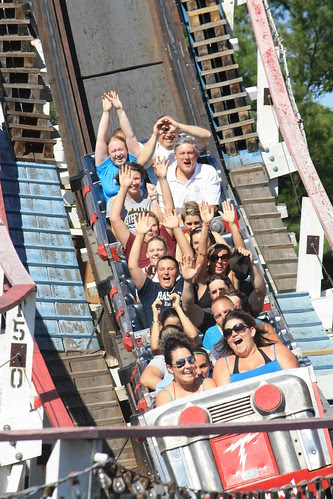 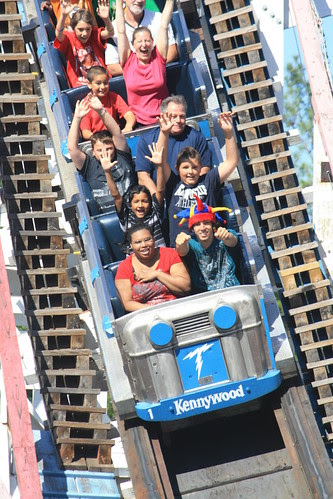 Kennywood has three steel coasters - the Sky Rocket is the newest in the park, and opened in June 2010.  When we got there, the ride was closed.  And by the time it opened, lines to ride the new coaster were nearly 90 minutes to two hours long.  The Sky Rocket is unique as the harness system is at the waist versus over the shoulders.  It is also the only coaster in the park that has loops.  Though we didn't get to ride it, it's on the list to ride as soon as we get in the park on our next visit. The park also has an indoor coaster, "The Exterminator."  It is a wild mouse type coaster and is located in Lost Kennywood.

The last of the major coasters in Kennywood is the Phantom's Revenge.  Phantom's Revenge is a 2001 redesign of the popular Steel Phantom, built in 1991.  The ride features two lengthy drops, the first is 160 feet which is followed by an uphill climb to a 232 foot drop down a ravine, through the wooden structure of the Thunderbolt, towards the Monongahela River, at a speed of 85 miles per hour.  A banked turn sends you back up through the Thunderbolt and a series of curves and bunny hops to the main station.  It is a fast an intense ride...for first timers the ride going through the Thunderbolt is definitely one of the highlights. 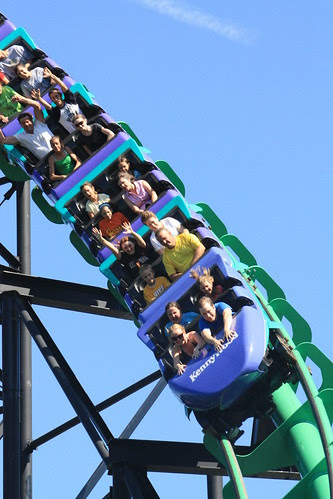 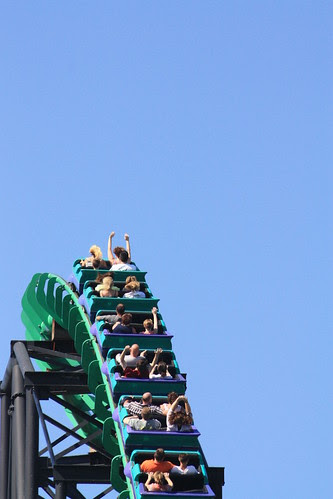 But there is a lot more to Kennywood than just its great coasters.  Maybe my favorite flat ride in the park is the Bayren Kurve.  It is a flat ride that is set to simulate a ride through the corners of a bobsled track.  As the ride increases speed, the 'sleds' tilt inward giving that higher speed feel.  When the ride hits maximum speed, a loud blaring horn goes off and for some reason is one of the best parts of the ride, at least to me.  See if you can locate me in the photo! 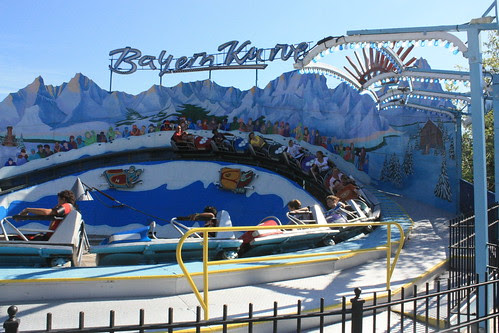 There are three water rides in the park.  The Log Jammer, the Raging Rapids and the Pittsburg Plunge.  If you wanted soaked hit the Rapids and/or the Plunge.  If you want a less soaking ride but a nice cool down on a summer day - hit the Log Jammer.  It's been in the park since 1975, and unless you rock the boat to create some waves and splashing, you're not gonna get that wet. 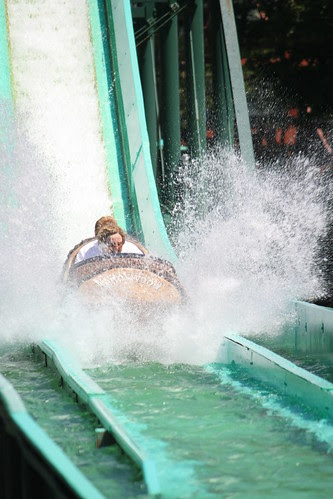 The Raging Rapids is set to simulate a white water rafting trip and you can get soaked.  But perhaps the ride that can soak you - and innocent bystanders - the most is the Pittsburg Plunge.  Located in Lost Kennywood, this modern version of the classic Shoot-the-Chute ride will leave you drenched.  It's been in operation since 1995 and certainly makes a memorable splahs. 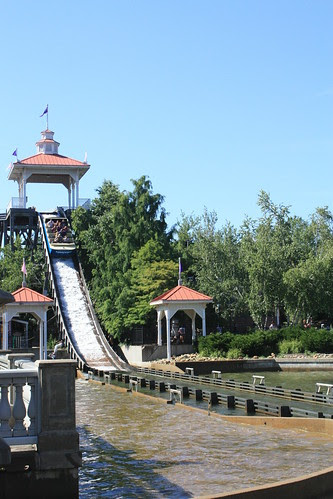 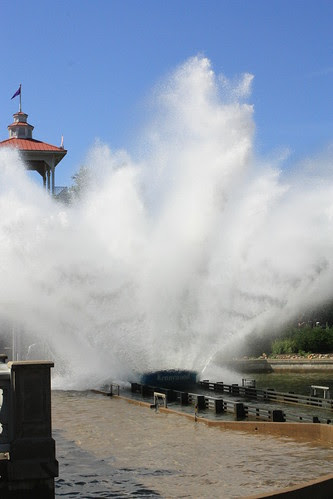 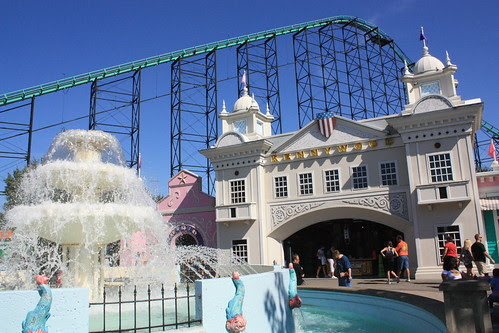 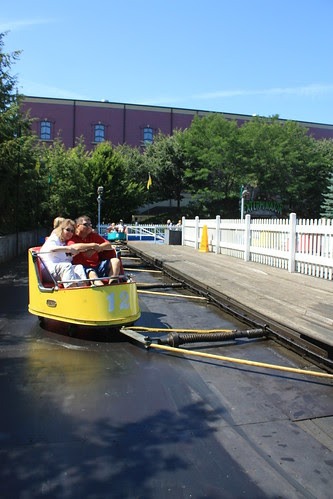 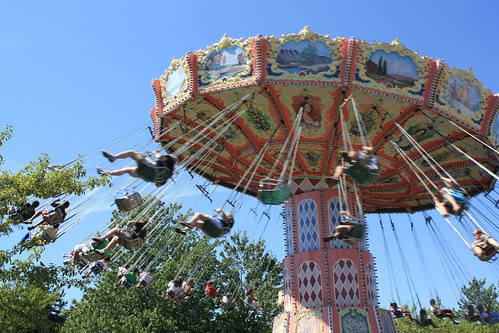 Kennywood also has a number of classic rides.  The carousel opened in 1927 and is known for its detailed beauty. 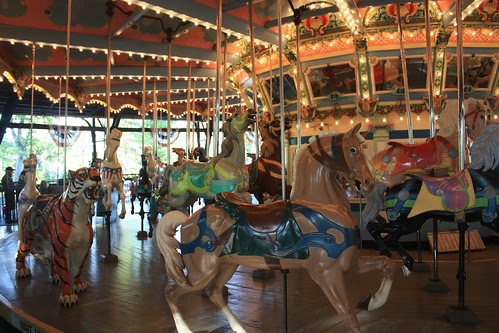 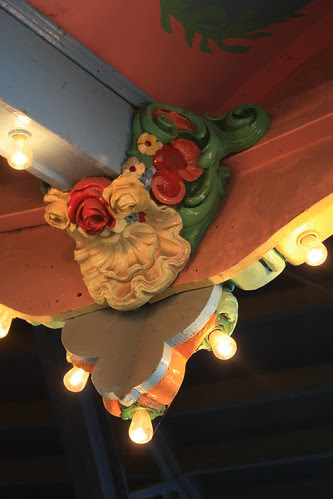 Noah's Ark is only one of two of its kind in the world.  The walk-through Fun House like dark ride was built in 1936; it has had a number of changes over the decades but is a classic attraction. 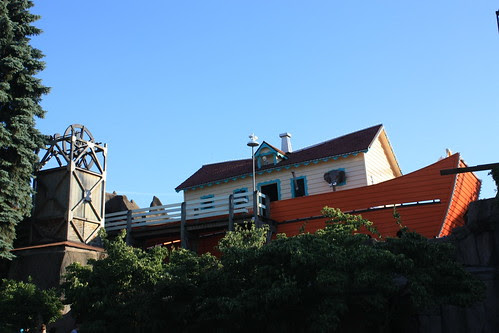 The Auto Race has been open since 1930 and is the only coaster like auto ride remaining in the country.  The neon sign over the entrance to the ride is original, but the number pained on the car is the last two digits of the year of when the entrance was repainted. 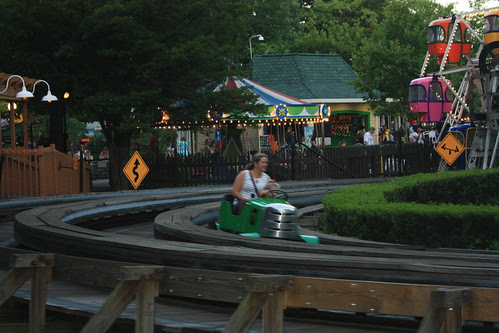 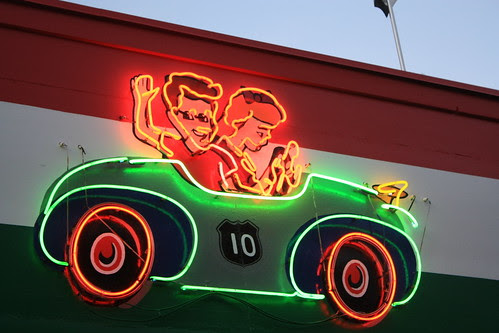 Every person and every family has their own traditions at Kennywood.  For myself and my family, the rides have always been the centerpiece of that tradition.  Over a century of family ties is the key fabric to Kennywood.   For me, my sister once worked and my brother currently works at the park, all three of us marched in Fall Fantasy parades here, Mom & Dad have numerous memories of Kennywood, my grandparents eloped after a visit to Kennywood over 60 years ago.  It is those memories and traditions that make Kennywood one of my most favorite places in the world, and I'm very excited that I have been able to begin new Kennywood traditions for Maggie and myself for the years to come.  I encourage all of you to start your own on a visit to Kennywood soon!

Ed Szuba said…
Great to see the Bayern Kurve back in operation...last time we were there, Matt was 2 (four years ago) and it was in storage.
9:18 AM