By Bob Malme July 26, 2010
I decided that I was tired of being hold up in 100 degree weather, and a road trip in the heat would be an excellent test to see how my AC was working. So I left early Sunday morning, to beat the extreme heat, and headed off to High Point and south to once again take note of the latest progress on building the I-74 freeway, still expected to open around November. Since I have been given several other places to check progress on the new section from Spencer Road to US 220, I will be including those photos in Part 2, as well as splitting the two contracts up onto separate pages on my I-74 pages as well.

I. High Point East Belt, Business 85 to I-85
A. Baker Road
In a semi-historic moment, not quite up the meeting of railroads in Utah, Segment 3 of the East Belt was finally joined to Segment 2 earlier in July, as you can see below: 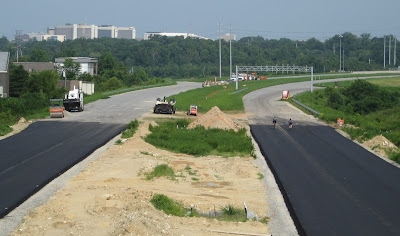 Asphalt now extends from Business 85 to just before Kersey Valley Road, most appears to be the final layers. As you may see in the future westbound lanes, the road is paved well enough at least for bikers to use. The other side shows the new asphalt as well, along with the need for more landscaping before the construction is complete: 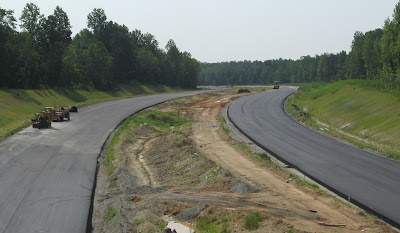 As for Baker Road itself, as you can see by the utilities still poking up in the street, a final coating of pavement is still due: 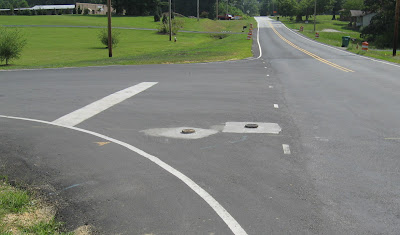 B. Jackson Lake Road
Some work on landscaping here, but the item of most interest is the pile of metal for the future overhead sign for the I-85 exit lying next to the eastbound lanes: 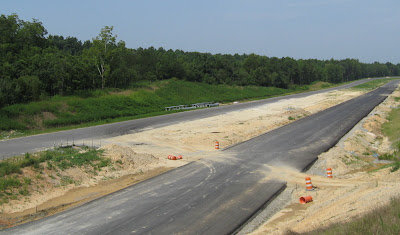 Trucks to put up the sign assembly will come from the still open access path from Jackson Lake Road, which is marked by dirt you can see on the right. Looking eastbound, some landscaping and water containment progress has been made: 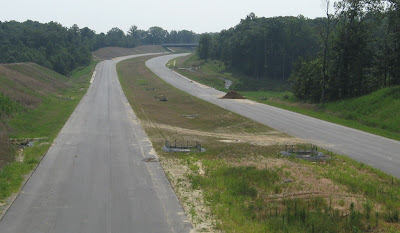 With some more progress needed for completion, there may guardrails needed to be placed here also.

C. Kersey Valley Road Bridge and Dresden Road Area
As you can see, most effort has been put into landscaping and guard rails this past month: 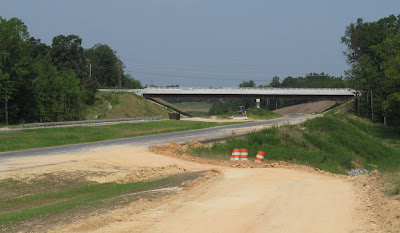 Of bigger surprise, was the installation of a BGS assembly for the I-85/NC 62 interchange just to the south/east of the bridge: 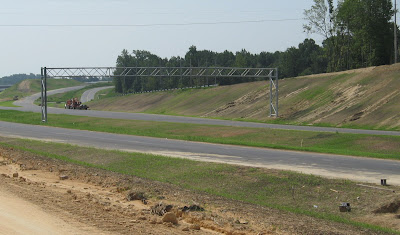 Hopefully, the next time there will be some actual signs on some of these overhead assemblies. There still needs to be some work on landscaping and water containment here, as the photo below shows: 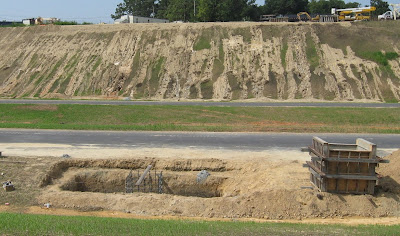 The heat isn't helping the former, nor probably the workers trying to do the latter. The only other new item in this area was the construction of a haul road to take the construction materials piled up off Dresden Road to where they are supposed to end up along the freeway: 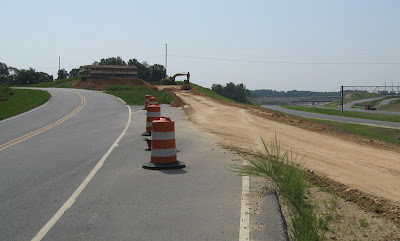 E. The I-85 interchange
The end of this section shows probable completion of all the bridges including the flyover on the right side: 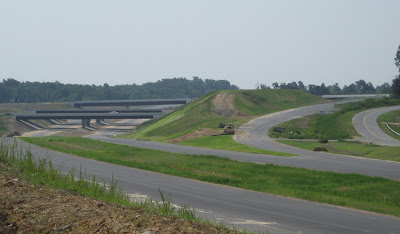 A closeup on the I-85 bridges, however, shows more landscaping work is needed along the new freeway: 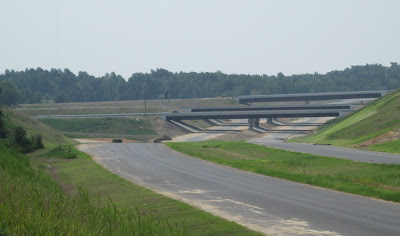 As for I-85 itself, more signs have gone up along the C/D ramps northbound: 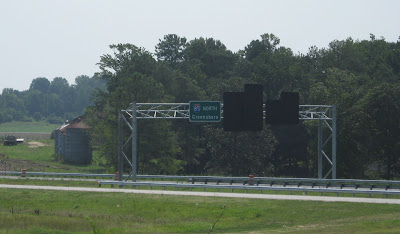 II. 'US 311 Bypass' I-85 to Spencer Road
A. I-85 Flyover Ramp
As indicated above, and shown below, this ramp and bridge combination appears to be complete with guardrails now posted at the bridge: 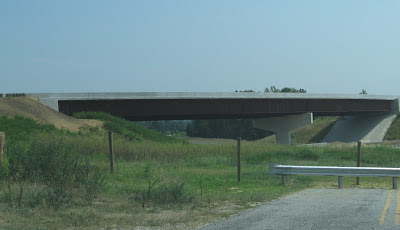 Construction trucks use the ramps to access I-85 which has caused them to put a orange colored merge sign at the end of the C/D ramps northbound.

B. NC 62
Nothing truly new to report here, I hoped for at least a new sign on the existing overhead assembly north of the bridge, but no such luck. 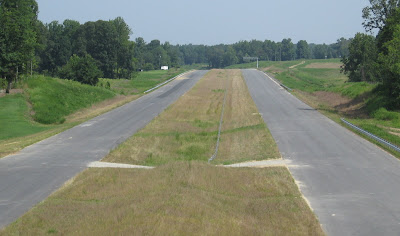 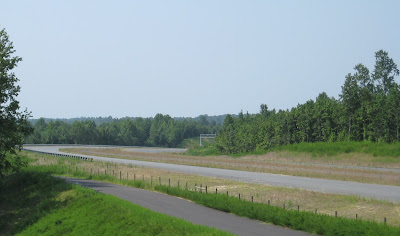 The sign is barely in view at the end of the curve. All major landscaping appears complete here.

D. Poole Road-Again, nothing new to report here, the final asphalt layer was applied to the creek bridge to the north, and blocked off by barrels, so that no construction truck (or biker) would drive over it.

E. Cedar Square Road and Interchange-
This is where the most work remains to be done. They have applied a base asphalt layer in some areas of the westbound freeway and on the ramps. The eastbound off ramp which traffic will use to leave the freeway temporarily until 2012 still needs a lot of work, as you can see here: 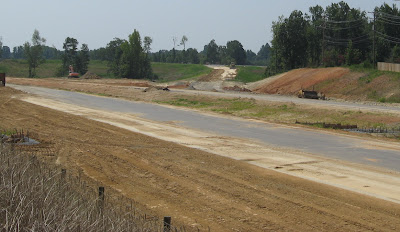 Work still needs to be done also on landscaping and water containment toward the bridge: 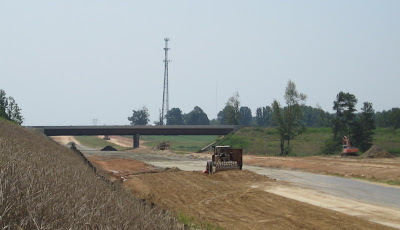 There has been some, but not a lot of progress on the westbound onramp, as seen here: 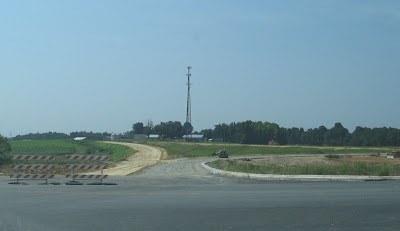 Or from the photo below, from the top of the bridge, which shows the freeway roadbed heading toward the end of this construction segment at Spencer Road. 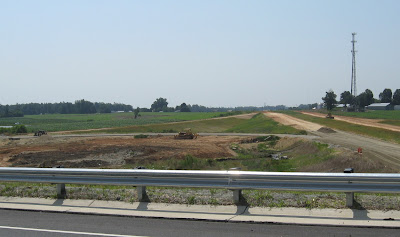 The remainder of the trip will be featured in part 2. It will feature three new places that will be used to chart progress, including a bridge that already has mostly been completed.