By Bob Malme June 15, 2010
Recently I posted to SERoads about an NCDOT press release regarding the replacement of interstate exit signs in Mecklenburg County. According to the press release "New signs with reflective sheeting will be installed, improving reflectivity and removing the need for lighting on the sign structure. The completion date is September 3."

New signs will be installed in the following locations:

Well, as it turns out, NCDOT has been for the last week installing similar signs (currently only on overhead structures) on the Durham Freeway, mostly southbound. I decided it was easier to show examples of the new signs by driving around Durham instead of traveling to Charlotte: 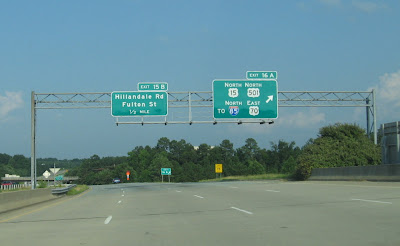 A closer look at the next sign for Hillandale Road reveals the light fixtures formerly at the bottom of the sign have been removed: 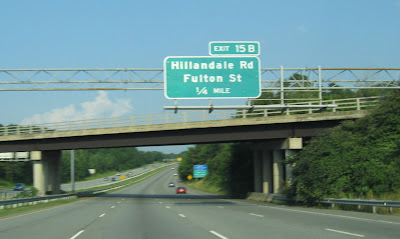 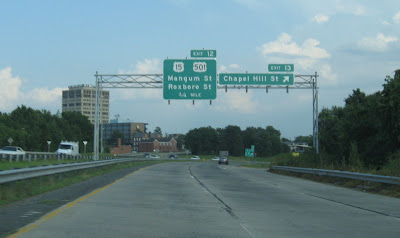 These signs changes are somewhat bittersweet for me, since the old ones were the first signs I saw heading south on the Freeway from my first apartment in Durham on Swift Road. The Freeway ended at Erwin Road at that time and the Swift Road southbound off ramp was the first exit ramp heading south. Exit 13 is also one of the ways to get to the Durham Bulls ballpark.

It appears they haven't quite finished installing the signs south of the city at Briggs Road, yet: 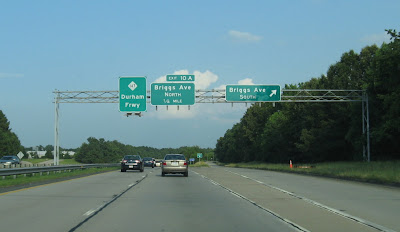 Notice no exit tab over the Briggs Avenue South sign (with, like for route numbers, the larger first letter in the direction label) and the new NC 147 sign still has lights installed. The placement of the exit tab on a separate sign makes it easier to remove for changes. Will there be changes in exit numbers when the Triangle Parkway, an extension of NC 147, is built? MassDOT is now doing the same thing with their new signs in case the FHWA refuses to exempt them from replacing their current consecutive exit numbers scheme with milepost based numbers.

Lastly, since I was there, I am throwing in a photo of the new pedestrian bridge near Alston Avenue completed earlier this spring: 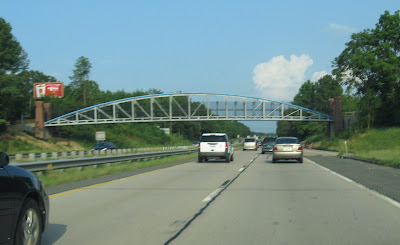 They have posted a couple new signs northbound also. I'll wait though until the project is finished to take a look at those.

Anonymous said…
Just wanted to point out that they have propagated the error on the Exit 12 sign--that is US 15/US 501 BUSINESS but there's no mention of that fact...
11:30 AM

BrentWhite said…
I-77 except for a handful of signs has been upgraded now.

Exit Signs said…
@Brent
Yes i noticed that it has been upgraded now.
1:33 PM