By Bob Malme June 14, 2010
I took a trip on Sunday the 13th to document the latest progress on building the I-74/US 311 freeway from High Point to US 220 (and to test, as it turned out, my air conditioning with temperatures close to 95). I first, however, wanted to document the new sign that went up on US 311 South Exit 65 to replace the sign taken down by the tornado earlier this spring. Here it is: 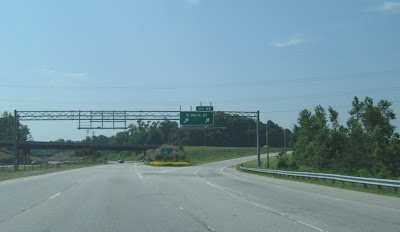 As you can see the sign just reads N(orth) Main Street. I think this is a quick fix temporary sign because all the others refer to High Point as well. Thus I expect it to be updated when the signs along this stretch are updated to indicate it's part of I-74. According to the plans, the sign on the left will read East I-74/South US 311, Asheboro and have two arrows pointed down to the through lanes.

I-74/US 311 Freeway Progress
To get new people oriented, here's a map of the first phase of the project: 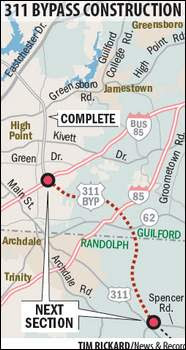 I. Business 85 to Spencer Road Section:
As for progress on the freeway, since the first phase of the project is almost 90% complete, there's only a few places where significant changes can be seen. That, and the several heavy rain storms in May and early June slowed progress at each end of the project where no asphalt has been put down. Still, there was some progress that could be seen, and I'll post photos of other areas where progress has occurred since the start of the year that I have not put up in previous blog posts. One of my contacts, Bill Travers, said he talked to a contractor he spotted last week at the Baker Road bridge site who said, as of now, NCDOT plans to open the freeway to Cedar Square Road in October. At the rate of construction in May, however, the route could be finished earlier, sometime in September, assuming they'll wait until the road construction is entirely complete before they open it.

A. Baker Road Bridge-Mixed signs of progress here. Looking at Baker Road itself, they are finishing up landscaping the former temporary road, and preparing for final paving of the new road: 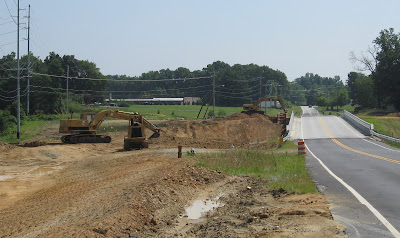 Looking south from the bridge one can see progress since May in placing water runoff culverts and placing the first asphalt layer on the future freeway lanes: 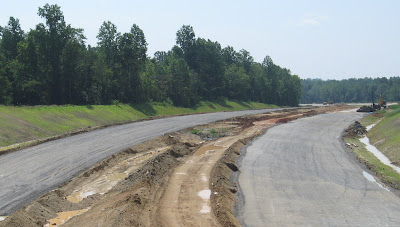 One can also see the progress in landscaping the sides of the highway, more progress needs to be done in the median, however. Looking north is a different story, where the roadbed has not received any asphalt layering, rains have increased the amount of work to be done: 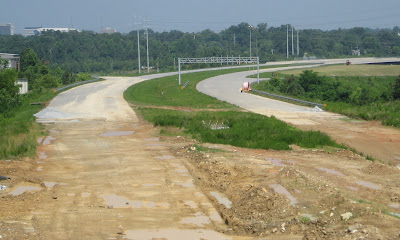 This photo highly resembles one taken a month ago with the exception of the longer length of grass in the nearby median. I assume NCDOT has the contractors complete the ends of the project last to dissuade curiosity seekers (don't know who those people would be) that might try to drive along the unopened highway.

B. Jackson Lake Road Bridge-Only the placing of the first asphalt layer in the westbound lanes appears to have taken place in the past month, along with some progress in landscaping: 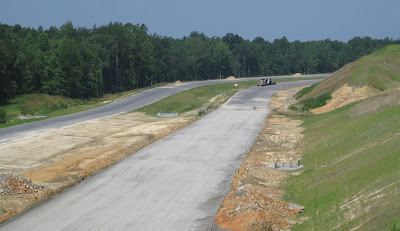 The view to the west/south is almost the same, showing this part is close to completion: 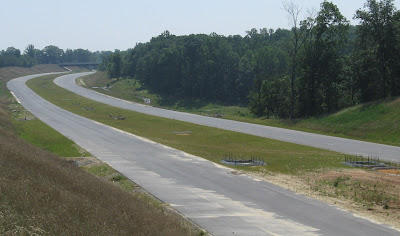 There's still work to be done in the medians, and landscaping the median around the bridge. 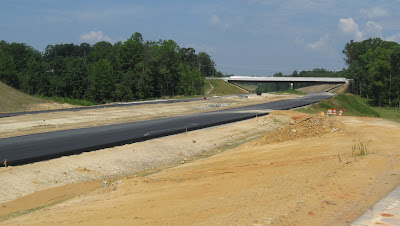 Looking back at the bridge from Dresden Road, landscaping is needed along the sides of the road. There's also further work need on landscaping on the other side of the freeway: 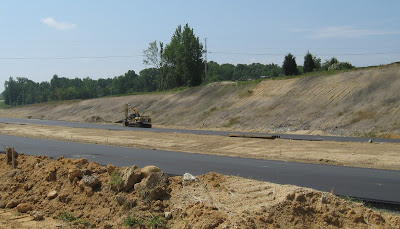 I can, or my shoes can better, testify to how waterlogged the soil surrounding the asphalt is, the surrounding hill should look like the rest of the embankment toward the bridge in about a month or so.

D. I-85 Interchange-The asphalt layer begun at Kersey Valley Road continues and ties into the previous roadbed layers starting at the I-85 bridge: 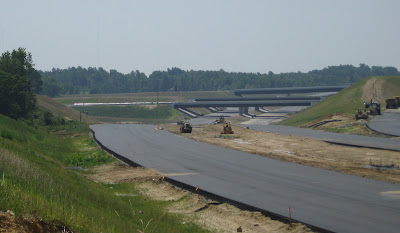 There are actually 4 bridges in the picture, the first you can see is the I-85 South C/D lanes for the I-74 and NC 62 exits, the second is I-85 North, the bridge between them that is blocked from view carries I-85 North traffic, the next bridge you cannot see is beyond and is the C/D lanes on I-85 North, the final higher bridge is the flyover ramp from I-74 East to I-85 North. The ramp has received what appears to be its final tar layer too: 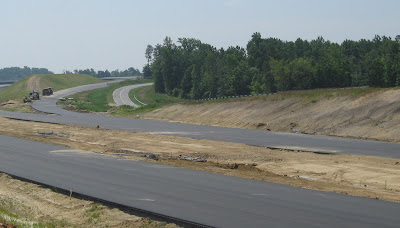 The flyover ramp system, thus may be complete at this time.

E. NC 62 Bridge-Final landscaping work is being done on this bridge, so the road can also receive its final asphalt layer: 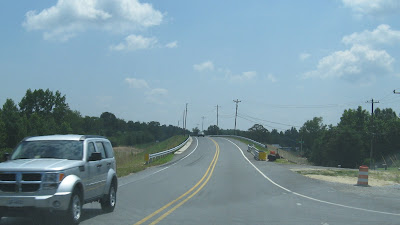 View heading east crossing the bridge, the orange barrel is where final landscaping is needed here. There is more to do on the other side: 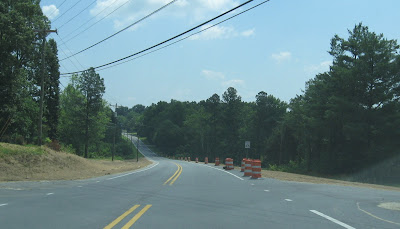 The roadbed on the freeway and landscaping appear mostly complete looking south from the bridge: 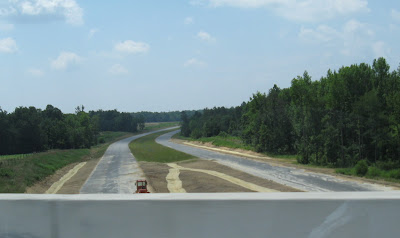 The same asphalt roadbed continues under the Tuttle Road bridge (no photos, no obvious changes) to beyond the Poole Road bridge: 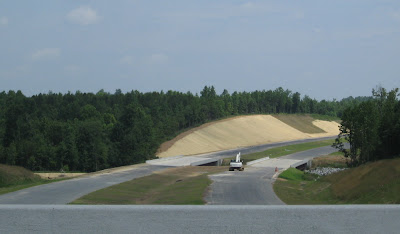 Some of the landscaping looking north from the Poole Road bridge looks less complete than it did in May (victim of one of the bad storms?). The remainder looking both ways on the bridge indicate this area is largely complete. The section south of the bridge also is largely complete, including added guardrails, just beyond the range of the photo below, so it's serving as a staging area for equipment working on the Cedar Square interchange: 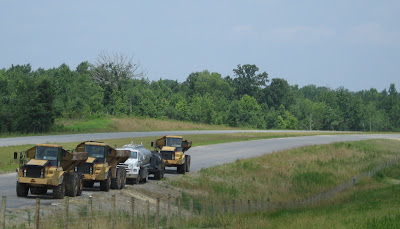 G. Cedar Square Road Bridge/Interchange-Not a lot of progress here seen on the roadbeds, but some more work has been done on the future on ramp to I-74 East. This cannot be said for the off ramp, and the temporary end to the freeway, when it opens in a few month: 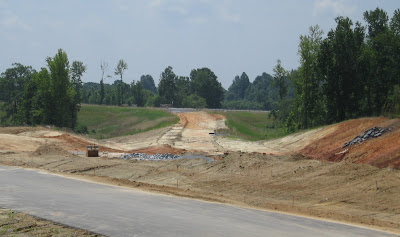 There is more progress on the future westbound lanes which have a couple of asphalt layers. The route beyond the ramp eastbound does not have to be complete for the freeway to open. Here's a look at freeway by the bridge, notice fewer pieces of equipment than in the past: 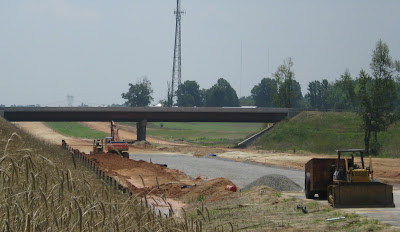 Some of this equipment is parked at the end of the first segment as seen looking south from the Cedar Square Road Bridge: 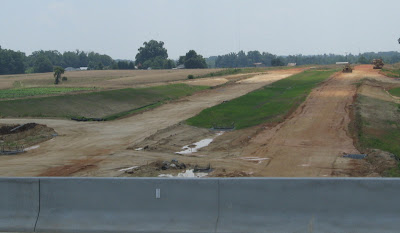 The view looking north shows the remaining work that has to be done: 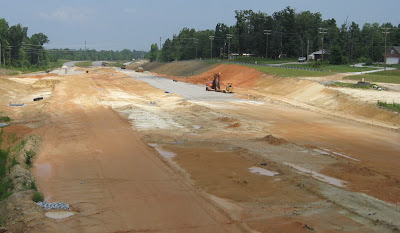 Which includes bringing an asphalt layer back, at least on the westbound lanes, under the bridge to where the on ramp from Cedar Square Road meets the freeway. Some of this work, no doubt, will have to wait until the roadbed dries out. 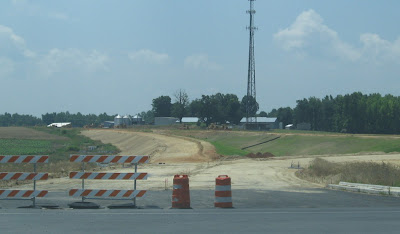 From this photo, except for grass growing in the middle of the interchange, not much progress has been made on completing the westbound ramps from last month.

II. Spencer Road to US 220
There has been some progress on several fronts. According to Bill Travers, several bridges have started to be built over the future freeway between Spencer Road and the current US 311 interchange. I plan to get directions to take photos on my next trip.

A. Current US 311 Interchange-While the view of the interchange area hasn't appeared to change in the last month approaching on US 311 South: 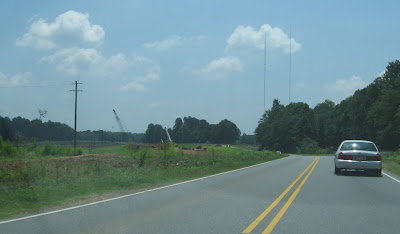 There has, in fact been much progress with the excavation and the start of construction that will carry the future road now carrying US 311 over the freeway: 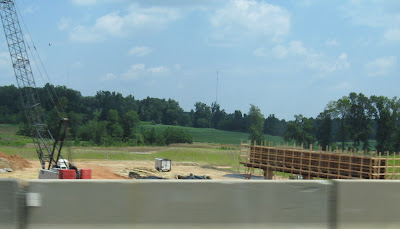 Sorry, this was taken from my car with the barriers blocking some of the view, the ground is excavated about 20 feet and the cement beam being created on the right is for the future bridge.

B. US 220 Interchange-Like 311, when approaching the US 220 interchange it also appears little has been done: 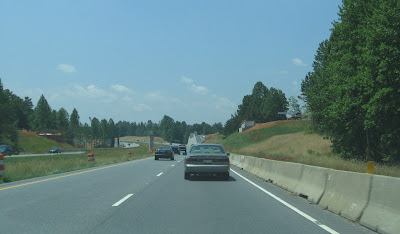 But in this case, with the exception of possibly some new work on the other side of US 220, seen here: 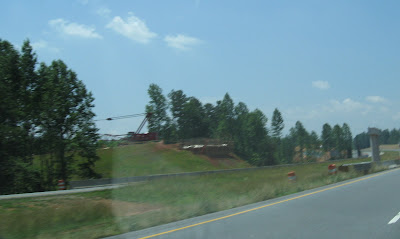 a closer look would reveal that you are correct. A closeup of the future I-73 North ramp bridge maybe shows a little more work complete on the landscaping end, but not much on the bridge: 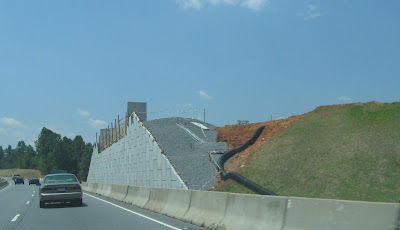 Since this part of the project is Design-Build, perhaps the contractors are using this time to do more designing, and waiting until it's cooler to do the building. I'll plan to visit the site at least one more time before the first part opens up, hopefully in early fall.