By Bob Malme November 23, 2008
I hear there have been some complaints about the lack of sign photos here lately. I took a trip to the Greensboro and High Point areas today (11/23) to help remedy the situation. The goals of the trip were to a) see what progress NCDOT has been making in restoring I-40 to its original alignment, b) check out the new interchange that opened this weekend for the PTI Airport from Bryan Blvd. (Future I-73) and the resulting signage, and c) confirm an e-mail sent to me that NCDOT had resumed its sign installation along the original US 311 freeway, putting up new exit signs with I-74 mileposts.

First, the I-40 situation. There was a NCDOT announcement last week they were closing lanes at the once and future I-40/85 split east of Greensboro for sign installation. I can confirm the signs were changed but they were simple shield and control city switches on the existing signs, not new ones. As shown here: 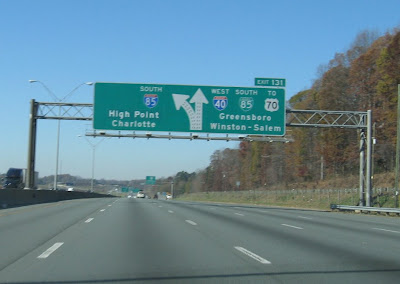 You can see High Point has replaced Winston-Salem for I-85 South. Here's a photo of the signs at the actual split: 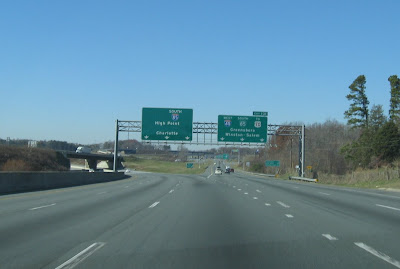 Here Winston-Salem was just greened out. The sign saying for US 421 use Exit 131 is still there. Nothing else had changed along I-40's route with Business 85. After the split though, actual interstate shields have replaced the previous Business 40 signs: 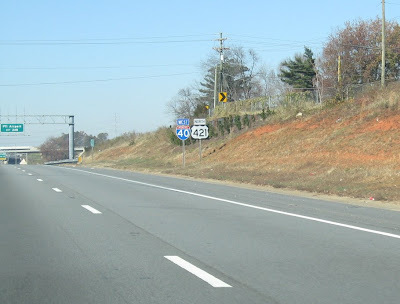 The mile-marker beyond in the photo is still is for Business 40. Also I saw only one replacement I-40 shield, going eastbound, that was not accompanied by a US 421 sign. Guess another crew is responsible for removing those. The signs at the I-73/840 exit were not changed, nor signs along the southern part of the loop.

Second, the new PTI Airport interchange. This will be the only exit off of I-73 while on Bryan Blvd. NCDOT approved plans last month to create a new alignment for I-73 that will take it north of Bryan Blvd. west of the interchange to NC 68. The first exit sign for the new interchange appears after the merge from the Greensboro loop ramp to Bryan Blvd. West: 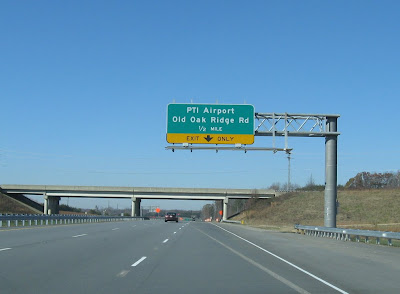 A new third lane on Bryan Blvd becomes the exit only lane for the interchange. Old Oak Ridge Road is where the FedEx hub offices will be located. Trucks coming to and from that facility will use this interchange as well. Here's the look at the interchange signage itself: 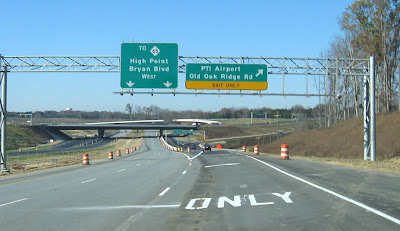 Further up the ramp is where traffic will split between the FedEx Hub and PTI Airport: 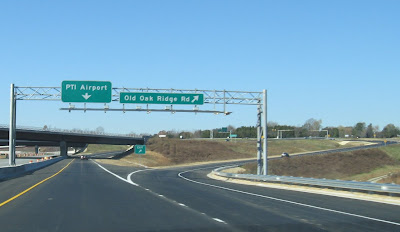 I was able to turn around before getting to the airport on the roadway that leads to the rental car facilities. The signs created for the airport have similar information to those of NCDOT, that since I-73 is a future route, it cannot appear on overhead signs, so for now departing traffic has a choice between To NC 68 on Bryan Blvd West'', or ''To I-40 on Bryan Blvd East''. Here's an airport sign: 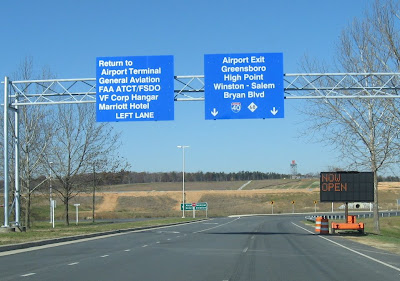 And here's an example of the NCDOT signage: 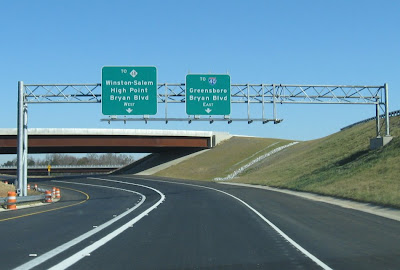 For signage on Bryan Blvd itself, visit my I-73 Segment 4 page.

Finally, the new signage on US 311. According to contract documents for the US 311/I-74 freeway (High Point East Belt) being constructed that started at what is now the Business 311 exit, signage for the remaining exits to the east would be updated along with those on the new highway to include I-74 milepost numbers with the existing highway west to I-40 signed as Future I-74. NCDOT started the project in the summer by putting up sign poles, but then no work was done for three months. I thought the work may wait until the construction on the new freeway project was done in 2011, but it started again last week. First putting up new gore signs with I-74 mile numbers and now starting to put up new exit signs. They have only accomplished this for 2 of the exits so far. Going westbound, the first I-74 exit number you see is here: 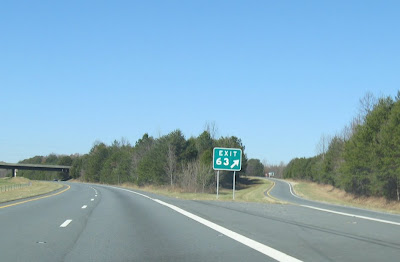 This is for NC 66. The first new BGS is for the next exit, High Point Road: 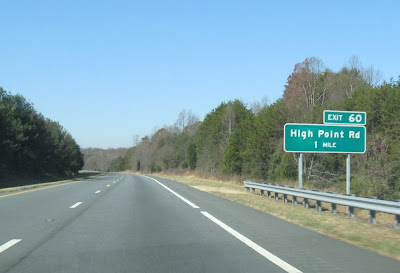 High Point Road is the old alignment for US 311. Here's a photo showing new numbers at the exit ramp: 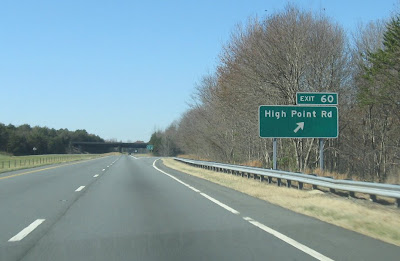 For now, the last new exit signs are for Union Cross Road, this accesses the Dell company facility: 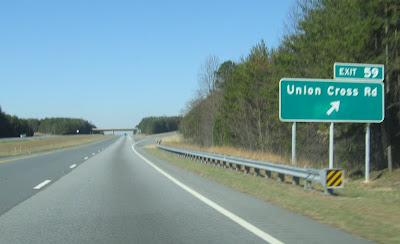 This will be the last exit on the US 311 freeway when the Winston-Salem Northern Beltway is completed, however, for now NCDOT is temporarily extending I-74 mileage to the existing exit for I-40. They could thus sign the freeway as I-74 (or Future I-74) since it will connect to an interstate. Here's the gore sign for the Ridgewood Road exit (Exit 56) that would be after the Beltway interchange, the exit for I-40 is Exit 55 (not pictured): 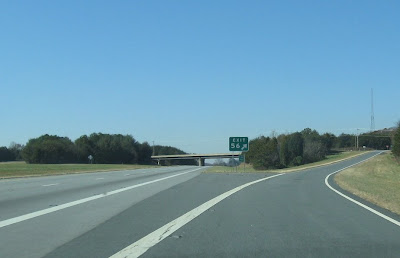 As to when the signing of the road as I-74 will occur. At each US 311 sign there are posts to place an I-74/US 311 sign, see photo below. A couple have old sign pieces connecting the poles. NCDOT typically uses these as placeholders for a future sign. Whether these signs will appear soon or in 2011, I guess we'll have to wait and see. 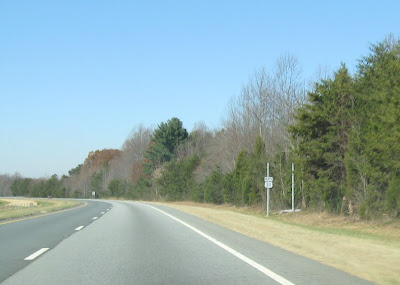 I have posted these photos and others on my I-74 Segment 5 page.

I also took some time to explore construction progress on the US 311/I-74 freeway, including the I-85/I-74 interchange. That will be the subject of a future post.

Comment: With the new exit signs on US 311 in Forsyth County there are now two sets of exit numbers from I-40 to Business 85. From west to east these are 55 to 63, then 25 to 19. Not only are these numbers far apart, they go in opposite directions. The original contract called for the renumbering of Exits 25 to 19 as 65 to 71. For consistencies sake, hopefully they will do this soon after completing the work on the mile 55 to 63 section.

Anonymous said…
This comment has been removed by a blog administrator.
10:50 AM

Bob Malme said…
In regards to my comment on US 311 exit numbering. NCDOT solved that problem in early December by changing all the exit numbers along the new stretch of highway from Business 311 to Business 85. The exits for the entire open freeway eastbound from I-40 run now from 55 to 71B. They also put up Future I-74 signs along the whole Segment 5 stretch. Check the link in the original post for photos of them plus also Segment 6 for photos of the signs with the new exit numbers at the bottom of the page.
6:07 PM