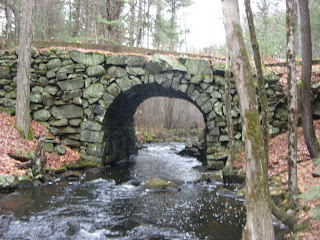 On Saturday, November 8, 2008, I took a day trip from Albany, New York to the New England states of Vermont, New Hampshire, Massachusetts and Connecticut. It was a trip that combined sightseeing, historic town greens, covered bridges, waterfalls, and roadgeeking.

Highlights in Vermont included Bennington Bypass construction (the eastern segment of the bypass between US 7 and VT 9 is currently in the works), Whitingham and Jacksonville (which are located along VT 100 in Southern Vermont) and the little town of Green River (accessible only by dirt road).

I clipped the southwest corner of New Hampshire by way of NH 119 and NH 63, stopping by Hinsdale and taking a look around its downtown.

I spent a little more time in Massachusetts, visiting various locales in the towns of New Salem, Petersham and Barre, encountering town greens, waterfalls and other things of scenic interest. Afterwards, I drove various routes in the Worcester area, and even entered Connecticut briefly. It started to steadily rain as dusk drew closer. I took US 20, MA 141, MA 33 and I-90 back to Albany, and even filled up my gas tank at $1.969 a gallon at a Pride gas station in Chicopee. After paying over $4 a gallon for gas during the summer, the price is a welcome sight.

Naturally, I took some photos during the trip, which can be found at my Flickr site.