By Doug May 18, 2008
Recently, I took a trip around Quebec, visiting rural landscapes, small towns and cosmopolitan cities alike. One thing that I stumbled across, in a couple of instances, was Quebec's snowmobile trail system. The Quebec Federation of Snowmobile Clubs (FCMQ), who represents that snowmobile clubs in Quebec, has set up an extensive trail system for snowmobiles around the province that appears to be loosely based on the highway system in Quebec. There are Trans-Quebec trails, which tend to be longer, and regional trails which are just within a smaller area, but just as fun. The signage appears to be on par with highway signage as well. The various member clubs maintain the trails for the most part, with the Ministry of Transportation Quebec (MTQ) helping with maintenance where necessary. Here is an example of the signage I saw near Sherbrooke in the Eastern Townships region of Quebec. 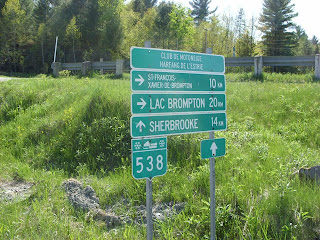