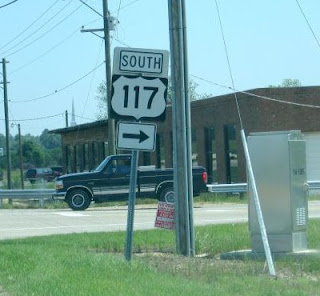 So, as of now US 117 is signed on a route that isn't officially US 117 but Alternate US 117 (NCDOT hasn't changed a lot of the signs so most still say US 117). Meanwhile, according to AASHTO, US 117 runs on a route that it isn't signed on, except for a few BGSs, since NCDOT went and removed all the ground US 117 signs from the freeway (US 117 mileposts and exit numbers remain) and on-ramps last December and January.

Commentary: It appears that there is enough blame to go around for this ruling. In recent years NCDOT has sent in many applications to AASHTO which that organization thought were incomplete or did not follow proper procedures. I believe this is one of the reasons why the US 117 (and US 17) applications may have simply been rejected out of hand once they did not meet the standard AASHTO policy regarding moving US routes. Of course, if NCDOT had spoken to someone at AASHTO about there application beforehand, maybe this rule would have come up and a negotiation could have taken place. NCDOT could have indicated that in regard to US 117 that they were only moving a route back to its original alignment that it had been on for, what, 75+ years?, that they didn't know at the time they asked it moved to the freeway that the route would be designated I-795, and that it might be more helpful to the traveling public that the freeway have only the interstate designation. AASHTO could have contacted NCDOT about why they were confused about the map with the US 117A application (I surmise this map only showed US 117 alternate going to US 301 or to US 264, not connecting back to AASHTO's official routing of US 117 on the freeway, so they did not see a proper northern end point for the route) and resolved that problem. And, of course, NCDOT could have waited for the AASHTO ruling, like there supposed to do, before removing all the US 117 signage.

I do not know what NCDOT will do, AASHTO has no powers to force them to put the US 117 signs back, but ignoring a ruling might cause more problems with later NCDOT applications. I have a feeling some sort of compromise will be reached. If not, NCDOT could simply as to decommission US 117 since it is about 110 miles long and does not meet AASHTO's current US Route standards. Given NCDOT's recent problems, the last thing they need to see is another news story about how they wasted more money removing signs that they had to put back.