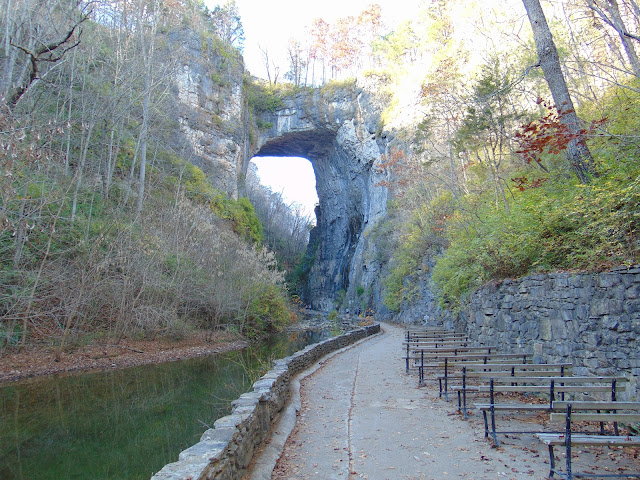 Steeped in geologic and human history, the Natural Bridge in Rockbridge County, Virginia could be considered one of the oldest bridges in the world. Since the settling of North America, Natural Bridge has served as one of the most recognizable icons of the wonders of nature in the United States. It has been revered by the likes of Thomas Jefferson, who purchased land in the area. It was the subject of several paintings by artists and is now the site of Natural Bridge State Park, allowing visitors from all over to witness the power and beauty of nature.

The 215 foot tall Natural Bridge itself is a remnant of a cave roof that collapsed. Geologists map the bedrock of Natural Bridge as part of the Beekmantown Formation, roughly 450 years old. It forms a remnant arch, however, the formation of the arch that forms Natural Bridge is much more recent. The arch may have developed only in the last 500,000 to 1,000,000 years. As rainwater seeped underground, it absorbed carbon dioxide and became slightly acidic, causing the underlying limestone to dissolve through cracks in the bedrock. As more water moved underground to create channels connecting the pores, enough rock was removed for a cave to form underground. Sinkholes may have formed above the channel, and over time, formed what is now Natural Bridge. Today, Natural Bridge is stable, but it is still collapsing over the course of geologic time. Eventually, the remaining portion of the ancient cave roof will collapse into Cedar Creek below.
The first European to document seeing Natural Bridge was John Peter Stallings, who was a captive of Native Americans in the Piedmont for six years and may have seen it while in their custody. Stallings settled in the upper James River valley in 1736 and wrote about Natural Bridge in his journal in 1742. Legend has it that George Washington surveyed Natural Bridge and carved his name in the rock about 23 feet above ground level, but there is no evidence proving that. However, Thomas Jefferson once owned the land where Natural Bridge is located. Jefferson probably saw the Natural Bridge for the first time on August 23, 1767. He obtained a land warrant in 1773, had it surveyed by James Tremble, then purchased it and 157 acres around it in 1774 for the equivalent of less than $200 in modern money between obtaining the land warrant, getting the property surveyed, and filing the necessary papers with the Secretary of the Virginia Colony in Williamsburg. Jefferson considered Natural Bridge to be a public trust and would not allow it to be injured, defaced, or masked from public view. Indeed, Natural Bridge and Niagara Falls in the late eighteenth and early nineteenth centuries occupied the top tier as the most impressive natural wonders in the New World, with many arriving on horseback or carriages. Jefferson later tried to sell the Natural Bridge property for development as a tourist resort. However, the property stayed in his family until 1833, some years after his death.
Even after Thomas Jefferson's passing, Natural Bridge remained in the public consciousness. Famed Hudson River School artist Frederic Edwin Church painted The Natural Bridge in 1852. In what may have been the biggest hoax of 1873, it was reported by newspapers across the country that the Natural Bridge had caught fire and burned. At this time, the Natural Bridge was privately owned as a tourist attraction. Even during the era when Jefferson owned Natural Bridge, he had a two room log cabin built nearby, with one room reserved for guests to use as a retreat. Many famous guests stayed here, including John Marshall, James Monroe, Henry Clay, Sam Houston, and Martin Van Buren. In 1833, a new owner erected the Forest Inn to accommodate the increasing number of visitors. Natural Bridge had considerable notoriety during the 19th century, with Herman Melville comparing the size of the Bridge to the white whale in the famous novel "Moby Dick". William Cullen Bryant, another American literary figure, was quoted as saying Natural Bridge and Niagara Falls were the two most remarkable features of North America. A more modern hotel was built around 1890, first known as the Appledore and later renamed the Natural Bridge Hotel, with the reconstruction of a newer hotel in 1964 following a fire in 1963.

As much as Natural Bridge is a geologic wonder, it has also been used as a bridge for transportation for centuries. Native American trails crossed Cedar Creek over Natural Bridge for thousands of years, and there has been a road in place since 1753. US 11 was constructed across it during the 1930s, and in 2017 the Virginia Department of Transportation estimated that 2,000 vehicles a day traveled on top of the Natural Bridge. You may not notice that you're crossing over Natural Bridge while driving along US 11, since there are fences on both sides of the road. The arch of Natural Bridge is so large that engineers have assumed it could handle the weight of vehicles and whatever shaking that might be simulated. The Virginia Department of Transportation does not consider it to be a bridge that requires regular inspections for safety. Nevertheless, alternative routings for US 11 to bypass the Natural Bridge has been studied as the route serves as a bypass and alternate to nearby I-81 when traffic concerns demand it.

In 2017, the Virginia Department of Transportation agreed to use ground penetrating radar to identify if there were any voids in that portion of Natural Bridge underneath US 11. The chief engineer recommended finding a way to close Natural Bridge to traffic, but based that proposal on the designation of Natural Bridge as a Virginia state park rather than on data indicating safety issues. The initial conclusion was Natural Bridge itself is not a danger to the motoring public and it is not likely the bridge is going to collapse. However, concerns remained that vibrations from traffic could cause future rockfalls. In 2019, the Virginia Department of Transportation and Virginia State Parks agreed that the best strategy would be to relocate US 11 with two preferred alternatives being identified, so traffic would no longer have to cross the natural geological feature. The alternatives indicate a mix of using existing roads and new road construction, and even incorporating a portion of nearby VA 130 with one of the alternative routings around Natural Bridge.

In all, I enjoyed my visit to Natural Bridge State Park, from driving across it on US 11 and later trying to identify the accompanying fencing as I was viewing the Natural Bridge itself. I was awed by the scenic beauty of the natural bridge as I snapped photos throughout my visit. I spent about an hour at Natural Bridge, skipping the exhibits in the visitor's center, but gladly paying my $9 admission fee (in 2022) to see the Natural Bridge and continuing onto Lace Falls before turning around.