By Challenger Tom October 13, 2018
This past weekend while returning from Lake Tahoe I crossed over the crest of the Sierras at Donner Pass.  My goal was to seek out the old Dutch Flat & Donner Lake Road and the abandoned Central Pacific Railroad tunnels.

I've written about Donner Pass several times before; the history of crossing dating back to 1844 up to the construction of Interstate 80 can be found here:

The DF&DLR in it's original form can be viewed on this 1889 Topographical Map of the Donner Pass Area.  At Donner Pass the DF&DLR can be seen crossing the Central Pacific several times heading east from Donner Pass to the north shore of Donner Lake.  It should be noted that the the DF&DLR crosses the Placer and Nevada County Line numerous times.

The DF&DLR became one of the earliest California State Highways in 1909.  According to CAhighways.org the DF&DLR was adopted as part of the Emigrant Gap State Road under Legislative Chapter 224 with the following description:

"An act to make an appropriation for the location, survey and construction of a state highway from Emigrant Gap...to the west end of Donner Lake..."

"...for the location, survey, and construction of a state highway from Emigrant Gap, Placer County in an E-ly direction through what is known as the Truckee Pass to the W end of Donner Lake in Nevada County... and it shall be the duty of the department to locate, survey, and construct said road along the line of the wagon road known as the Dutch Flat and Donner Lake wagon road..."

The full legislative statutes from 1909 and more information regarding early era State Highways can be found on CAhighways.org:

The primary purpose of State Highway maintenance on the DF&DLR was to improve the roadway for ease of travel during the early automobile era.  According to CAhighways.org the first legislative appropriation to improve the DF&DLR was in 1911 followed by an act in 1916 (Chapter 619) to remove an at-grade crossing of the First Transcontinental Railroad.

The 1916 legislation served to remove the at-grade rail crossing the DF&DLR took at Central Pacific Tunnel #6 (which was leased to the Southern Pacific in 1885) which was replaced by an underpass between Tunnel #7 and Tunnel #8.  The 1916 DF&DLR is often cited as one of the first highway rail underpasses in the United States if not the first, I cannot confirm if the latter is true.  1916 was also a significant year for the DF&DLR as it was chosen to be signed as the Northern Spur of the Lincoln Highway in California. 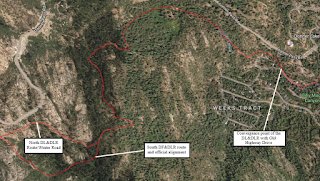 East of Donner Pass there is a split in the DF&DLR.  The northern route while shorter had far higher grades than the south route.  The southern route appears on the 1889 Topographical map above as part of the original alignment of the DF&DLR.  The north route apparently mostly saw use as a winter route as it wasn't as subject to avalanches due to being far away from the cliff faces on the south side of Donner Pass.  The north route of the DF&DLR can be seen on this article below which shows a driver attempting to descend eastbound from Donner Pass; Central Pacific Tunnel #8 can be seen in the background.

With all the history of the DF&DLR dispensed of I began my hike at the China Wall Monument.  The China Wall is a 75 foot brick wall completed in 1867 which bridged Central Pacific Tunnels #7 and #8. 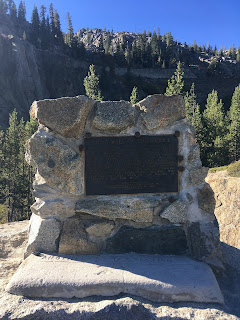 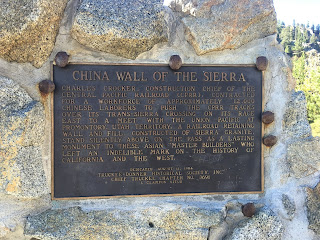 From the above monument China Wall and Tunnel #7 are easily observed. 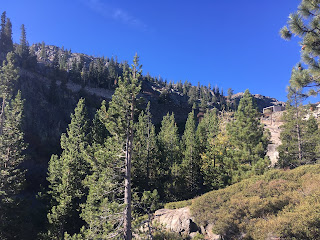 The gulch behind the China Wall Monument south of Donner Pass Road is the overgrown DF&DLR.  The China Wall can easily be seen looking south and the grade of the DF&DLR is somewhat easy to follow by thanks to the power lines. 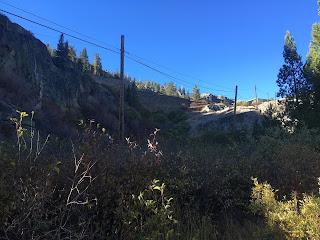 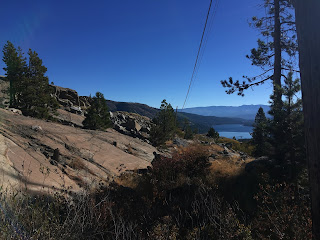 Picking my way through the brush I made my way to a granite slabbed hill with a direct line up to the China Wall and 1916 DF&DLR underpass.  The 1913 underpass can be seen directly to the right of the China Wall in the photo below. 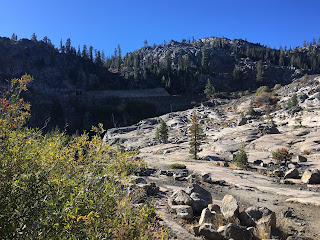 The 1916 DF&DLR is easily accessed and has very obviously seen far better days. 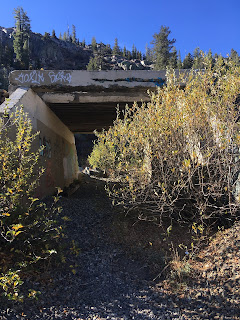 Looking back north from the 1916 underpass the grade of the road can easily be seen on the left followed by tracing it through the trees below.

Within the 1916 underpass there is a vandalized Lincoln Highway shield painted on the concrete. 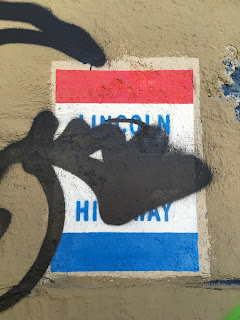 Looking back through the 1916 underpass it is easy to see why it was deemed to be insufficient as it extremely low.  In a modern sense the 1916 DF&DLR underpass doesn't even resemble a roadway at all. 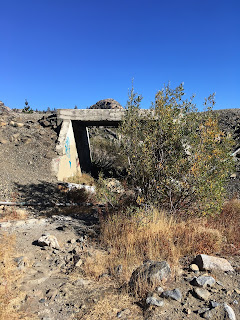 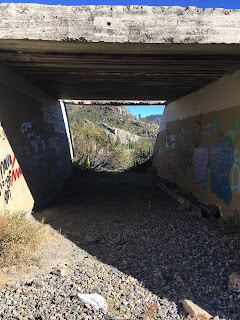 Following the 1916 alignment of the DF&DLR westbound there is some trace evidence of a previous highway. 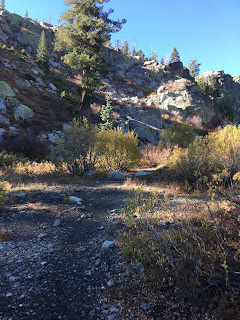 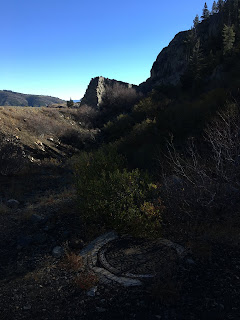 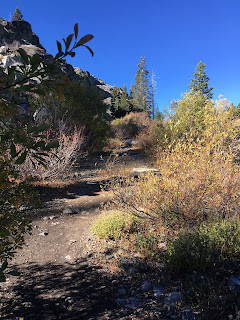 I ascended on the former Central Pacific right-of-way above the 1916 DF&DLR alignment.  From the rail grade it is very apparent the 1916 underpass probably isn't going to last much longer looking east towards Tunnel #8. 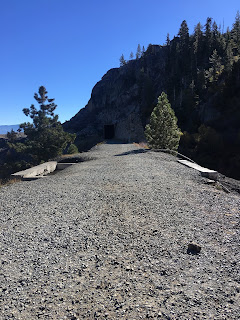 Looking through Tunnel #7 westbound Tunnel #6 and the original 1864 DF&DLR grade can be seen in the distance. 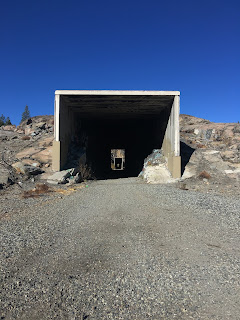 The original 1864 alignment of the DF&DLR originally crossed in front of Tunnel #6 in the picture below.  The hazard of climbing up a rail grade to cross tracks in front of what was a busy tunnel is extremely obvious. 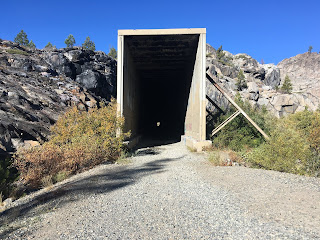 North of Tunnel #6 the original 1864 DF&DLR grade is still apparent and can be traced to the 1916 grade through the tree line below. 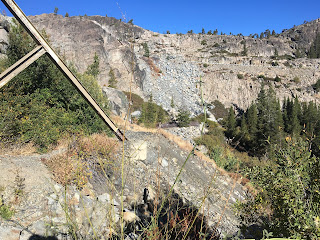 Walking back to Tunnel #8 it's massive length is apparent. 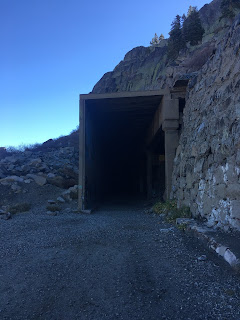 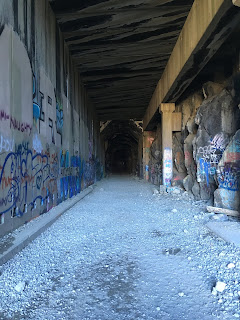 Central Pacific Tunnel #8 is also known as the Great Summit Tunnel of the Sierras.  Tunnel #8 took 15 months to complete and first train to travel through was in June of 1868.  Tunnel #6, #7, and #8 were bypassed in 1993 by a new Union Pacific alignment to the south.

From Tunnel #8 I climbed north on the rock face to an overlook of Donner Pass.  All of Donner Pass Road, the 1916 DF&DLR alignment, along with I-80 off in the distance could be seen.  Looking east the DF&DLR was still apparent despite close to a century of disuse.  It is amazing to consider how people entered California over Donner Pass since 1844 and how much of it's history is still apparent below.

C. Bohmont, Reno NV said…
I may be wrong, but I seem to recall that the ROAD is still largely a hiking trail that takes off from Donner lake *JUST* South of the CURRENT “old” (highway 50) road at Donner Lake where the road starts its climb from the lake.
6:24 PM