Tour of the Triangle Expressway

By Adam December 10, 2011
On Saturday, December 10th, I took a drive to check out the newly opened NC 147 Extension and what will become on Janurary 3rd - the state's first toll road.

Of course, the entire photoset from the trip is on flickr. 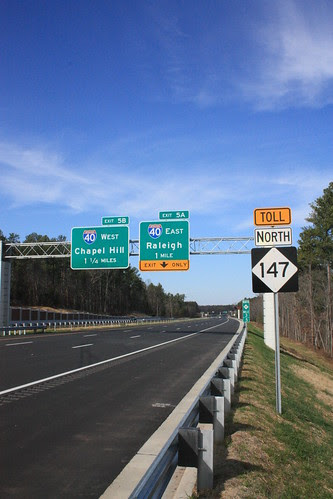 Right before Thanksgiving, a number of us got a sneak peak at the new highway during the Expressway Trot, a 5k that went from Hopson Road to Interstate 40 and back.  Obviously, this time I was driving on it, and not running.  So let's take a look at some of the signs approaching NC 147 from I-40 and NC 147 itself.

The VMS's on I-40 in both directions announced the new highway's opening. 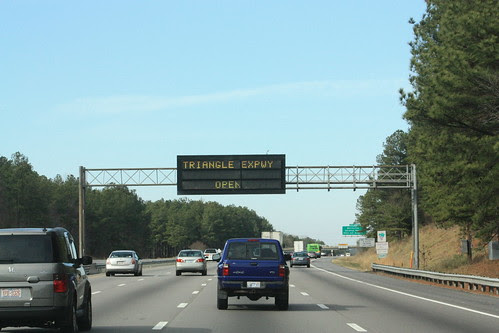 The overheads on I-40 at I-540 have been updated for the eventual extension of the Triangle Expressway and NC 540.  Some of the signs are quite gigantic. 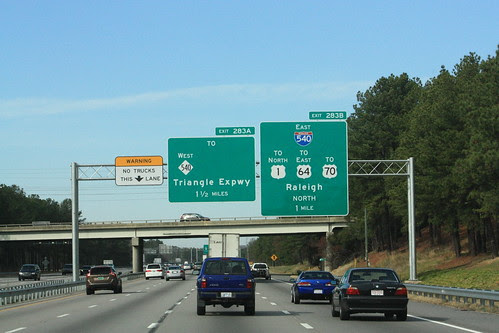 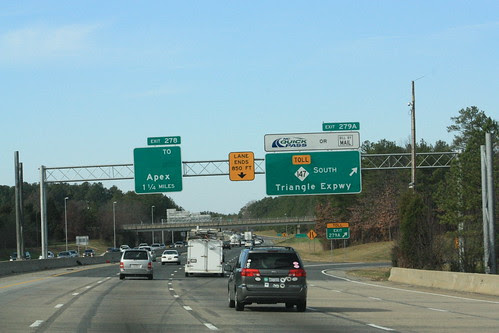 The Exit Gore on I-40 for NC 147 South read "TOLL EXIT" which I had not seen before, but I am guessing is MUTCD standard. 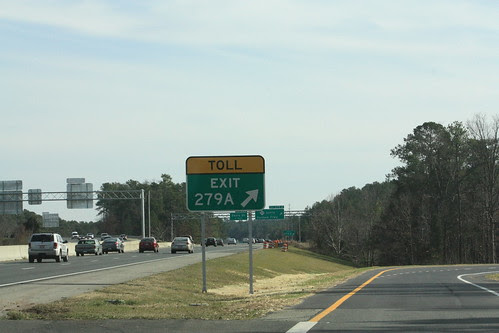 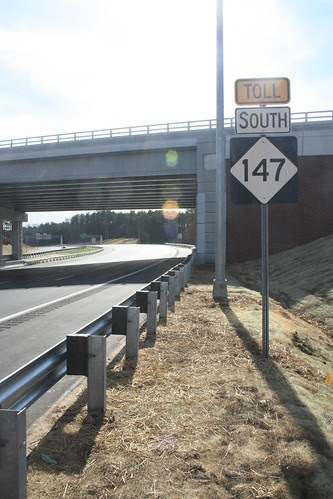 This overhead is quite the size.  It's for the directional Y interchange where NC 147 meets NC 540.  Note a few things on the sign.  One NC 540 changes from East/West here (I-540 is also signed as East/West) to North/South. Also, there's space for when NC 540 becomes Toll and eventually for TO US 1 South and possibly US 64. 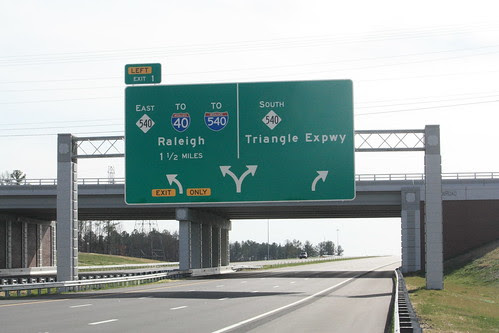 When you get to Exit 1 - you will notice ghost ramps stubs for a four lane highway.  This will one day head to Cary and meet the McKrimmon Parkway. 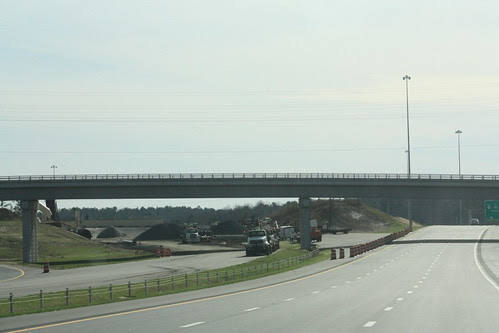 Now we're headed North on NC 540 approaching the new Exit 67 for NC 147 and the Triangle Expressway. 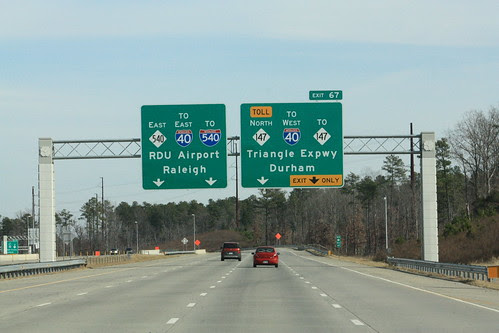 Exit 67 had previously led to Davis Drive at Kit Creek Road.  Now, Exit 67 is a high powered, free-flowing, fast moving, expressway to expressway interchange. (If I said freeway, it would be misleading since both roads will soon be tolled.)

Speaking of tolling, here's what the all electronic toll booths look like.  This is where NC 540 will transition from free to toll and vice versa.  These toll booths will remain inactive to later in 2012 when the TriEx and NC 540 is extended southwards towards Apex and eventually Holly Springs. 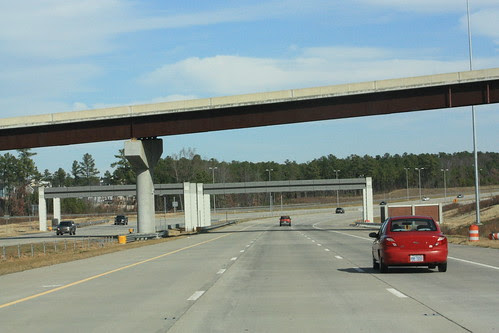 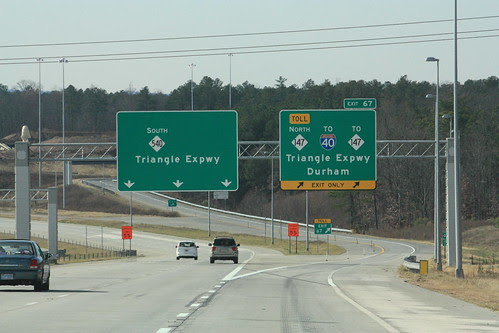 There wasn't a lot of traffic this Saturday afternoon.  It was about 12:30 when I took this photo.  It'll be interesting to see if this is what the highway will look like once the tolls begin on January 3rd. 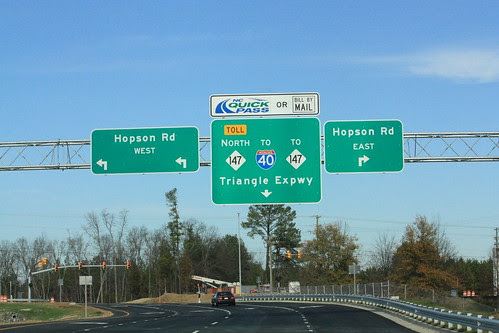 Here is an example of what the toll schedule signs look like. 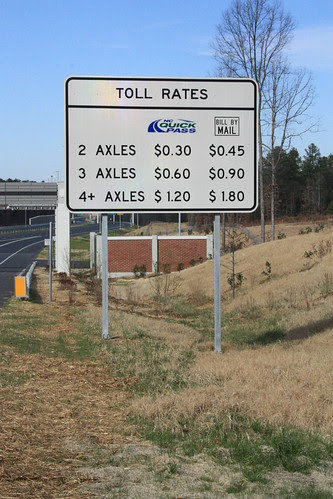 Here's an example of the milemarkers that will be on the Triangle Expressway.  Really nothing different than what is already used. 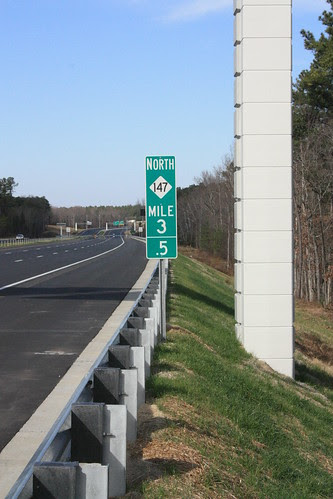 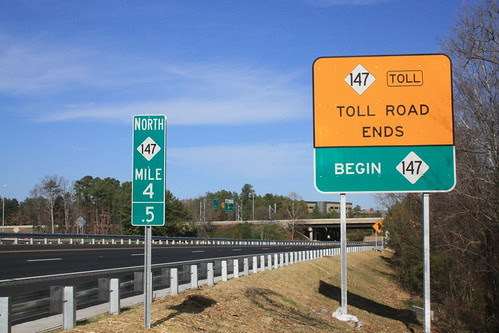 Finally, when driving for the second time down NC 147 Toll, I took a quick glimpse at where NC 147 had jogged southwest towards TW Alexander Drive. I had noticed the back of the old I-40 Exits 5A-B guide sign that stood at the then beginning of NC 147.  The shot is zoomed in as the old road is fenced off.  NC 147 had ended at a stoplight at TW Alexander, which is now removed.  Here is what it looks like today. 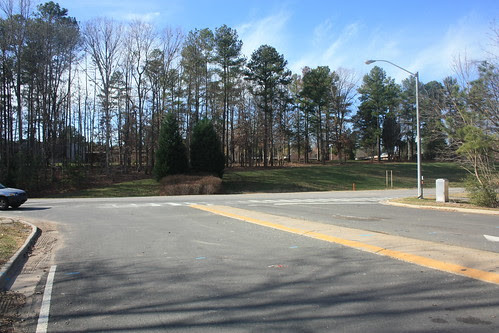 I am sure it will be a matter of time until the guide sign and pavement is removed.

Overall, I like the new road.  The signs are pretty sharp and have some new changes that we're not used to seeing here in North Carolina.  I'm looking forward to seeing the NC 540 extension when it opens later in 2012.

Charlie said…
Not that I'm planning to be anywhere near the Triangle in the near future, but is NC Quick Pass E-ZPass compatible? I know Florida's SunPass isn't, but Virginia uses E-ZPass.
9:33 PM

Bob Malme said…
Glad they kept 'my' exit numbers on 540. Too bad they didn't go with purple signs like the first maps hinted at. With all the 'toll' signage they put up, I'm surprised a small yellow banner didn't find its way on top of the mileposts.
As for compatibility with E-ZPass, not yet. The NC legislature has to pass privacy protection laws for motorists using the transponders that is identical to those in all other E-ZPass states first.
9:40 PM

Laura said…
On Thursday at 4:30 p.m., there was the same amount of traffic that you saw on Saturday. Will definitely be interesting to see what it looks like with the toll. If it looks like that all the time, I'll happily pay cash$money to use it to bypass all the traffic on 40 from NC 147 to 540. :-)

Brian said…
If there's only controlled access through interchanges, it isn't misleading at all to call the TriEx a freeway, as that's how that word is defined (not whether the road carries tolls).
8:24 AM