By Bob Malme December 27, 2011
Part 2 will focus on I-74. Besides the construction projects indicated in Part 1, there are also 2 others currently on US 74 that will be useful when signed as an interstate. In Columbus County NCDOT contractors are working on upgrading the current at-grade intersections with NC 242 north of Whiteville, and NC 211 just east of Whiteville bypass freeway into interchanges. Work began on both projects in the summer of 2010 and are scheduled for completion in 2012. Currently the NC 242 project is farther along, at about 75% complete compared to about 50% for NC 211, and should open first. These two projects, along with a bridge replacement just south of the current end of I-74, that extends the de facto I-74 freeway another 4 miles, suggest a piece-meal approach to bringing US 74 between Whiteville and Lumberton up to interstate standards. While there is a project on the books, still unfunded, to upgrade US 74/76 from Whiteville to Wilmington to Interstate standards, there's no comparable one to fill in this gap. Whether this stretch continues to be improved one intersection at a time, or all at once, this is not likely to happen until after 2020. The call to build a freeway between Whiteville and US 17 for connecting I-74 to Myrtle Beach has not been publicly expressed since the Easley administration left office and NCDOT completed studies showing its high cost. Perhaps the funding of the upgrade of US 74/76 will renew the calls to end I-74 in Wilmington.

There was movement on another future I-74 project during 2011, the long-promised Winston Salem Northern Beltway. When NCDOT completed a ranking list of all its urban loop

projects in 2010 and Winston-Salem finished last, meaning no construction for at least another ten years, the citizen outcry was so high, especially from property owners along the projected beltway's path, that NCDOT went back and reformulated its loop priority list. While this improved the projects' rank, it still put the Beltway out of the top 10 priority projects on the list. With a threatened lawsuit by city of Winston-Salem and/or its residents a possibility, NCDOT and Governor Perdue stepped in during 2011 and created a new 'urban loop acceleration plan' that moved up the dates of several projects, including Winston-Salem's. Using GARVEE bonds as a funding source, property acquisition will begin next year and construction of the first segment of what will be I-74 between US 158 and Business 40/US 421 will start in 2015. For a more complete description of the project visit NCDOT's Winston-Salem Beltway page.

As for construction occurring in 2011, the I-74 (US 311 Bypass) freeway project is about 75% complete. Though technically behind (NCDOT projects it should be 87% complete at this time), the completion date for the project was moved up from November to October 2012. As can be seen in the photos below, taken this past October, much of the bridge work is complete, while further work needs to take place on the roadbed and the interchanges. This has been photographed before, but this is the current end of I-74 at Cedar Square Road: 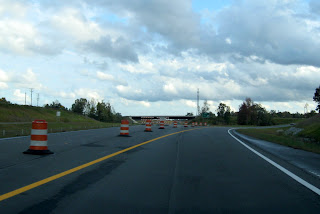 The view from the Cedar Square bridge eastward shows progress in extending the freeway toward Spencer Road: 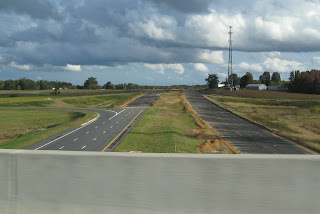 While the prior contract put down the graded roadbed south of the Cedar Square exit, the current contract was responsible for paving the road. The new road cuts off Spencer Road with the road to the east of the freeway now getting the name of Old Spencer Road. Here's a view from the roadbed itself looking back at the Cedar Square interchange: 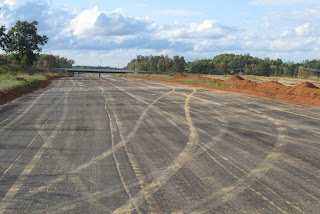 This visit cost my shoes and car a good layer of North Carolina mud. The mud didn't completely come off my car until about a month ago. Proceeding south, according to NCDOT, the bridge for the next crossroad, Banner Whitehead Road, was completed in early December. While I didn't make it down to this area, I did visit the next major crossroad, Branson Davis Road: 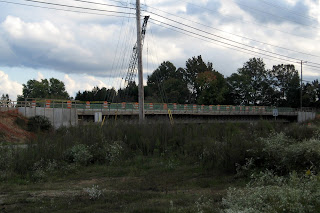 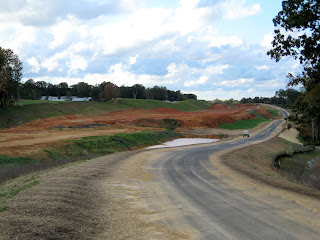 Work on the roadbed itself, as seen above and below, had not progressed all that far: 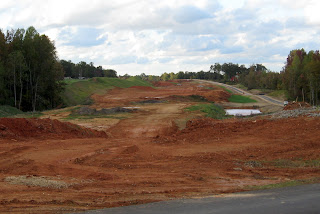 To the east work has been completed on a bridge carrying Walker Mill Road over the future freeway. This is the view from just east of the new bridge south toward the future interchange with current US 311: 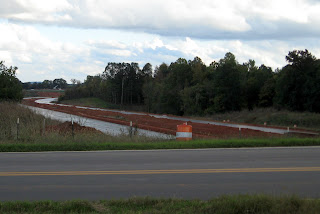 Definite progress on constructing the freeway roadbed here. The bridge carrying current US 311 over the new freeway was completed in the spring of 2011. Here's a view approaching on US 311 South: 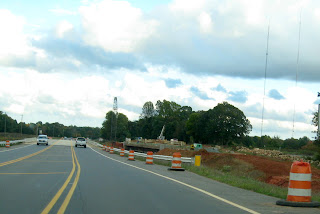 The new road has three lanes in anticipation for turn lanes for the new interchange still under construction. To the right, the old roadway now serves as the future rail corridor and work is continuing on building a new railroad bridge.

South and east of the future US 311 interchange, the next major crossroads is Plainfield Road. Here a new bridge has been completed along with a road to connect to the farm further south on Old Courthouse Road that will be cutoff from the rest of the road east of the freeway that connects to current US 311: 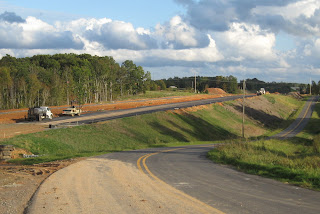 The new road, called Cooper Farm Road, I assume after the owners, connects to Plainfield just west of the new bridge, which can be seen here: 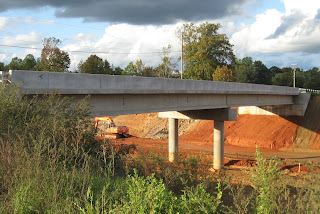 Completion of this bridge had been held up to wet weather which has made much of a lake of the original roadbed under which the bridge would cross. Another bridge that has been completed this past year is the final crossroad before US 220, Heath Dairy Road: 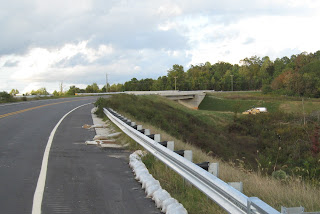 This view is from the western side of the bridge. Looking north from the bridge itself one can
see progress on constructing the road back to Plainfield Road: 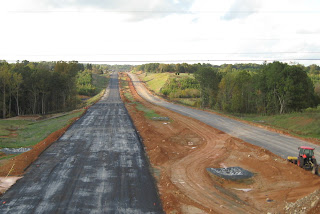 While looking south one can view the completed ramps for the US 220 interchange: 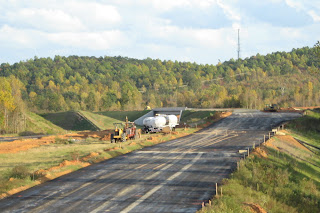 The bridge that can be seen is not over US 220 but takes the future I-74 East ramp to US 220 (I-73) north over the I-74 West roadway. Asphalt has been placed at least up to the split of the eastbound freeway into north and southbound ramps. To look at the ramps over US 220 one has to travel on that highway itself. Here is the approach southbound of the complete interchange: 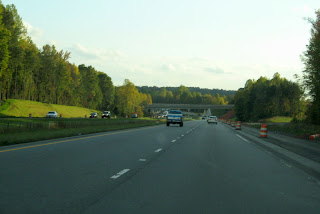 The future off ramp to I-74 east is blocked by orange barrels. The first bridge approached: 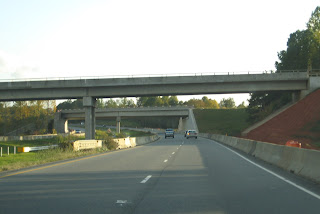 Is the future ramp from I-74 East to US 220 (I-73) north. This ramp was to originally been a flyover design but was changed to a much simpler (and cheaper) bridge and cloverleaf ramp during final design. The next bridge is the flyover ramp bridge to carry I-74 West: 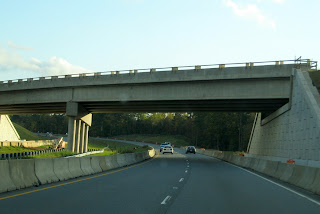 Work appears nearly to be complete on the bridge, while there appears more to do: 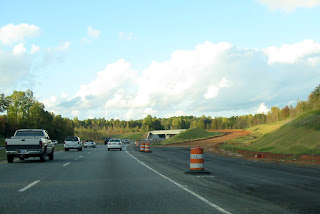 On the future ramp for I-74 West. Here's another view of the bridges from US 220 North: 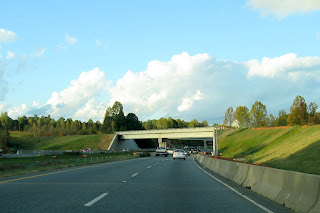 As indicated above, this project is now scheduled to be completed in October 2012. Whether it's opening will be coordinated with the finish of the Asheboro project and whether US 220 will be signed as a full interstate between Randleman and Asheboro is unknown. NCDOT has kept as unfunded plans to upgrade US 220 to an interstate between Greensboro and Asheboro. They may be hoping for a waiver on this section of US 220, which is close to interstate standards, to allow interstate signage as far north as the future I-74/US 220 interchange. The other upgrade projects for US 52 north of Winston-Salem and US 74 between the Laurinburg and Rockingham Bypasses were also left unfunded in the latest state TIP, meaning construction is not scheduled until after 2020.

I plan to include this information and more photos in an updated version of my I-73/74 web pages currently still on the Duke server. I hope to find another host and time to revise and move the pages within the next month. My next post will be from the new (old) home, Massachusetts, then more construction progress photos of the Triangle Expressway.