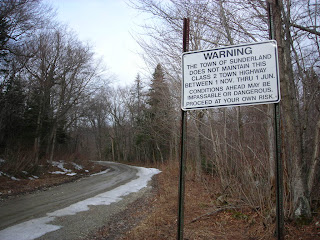 Entering the Town of Sunderland on Kelley Stand Rd.


Some of you may be aware of county collecting and the tracking site for counties, which is http://www.mob-rule.com/counties/. I tend to visit the county collecting site, and if I am in a new area, I will go bonkers for county collecting. This is because it encourages myself and others to visit places around the country that they would otherwise not have visited. Canada has counties as well, but I have not found a similar map for Canadian counties. However, being a resident of Albany, NY, and having clinched most counties in a radius of hundreds of miles (the island counties of Massachusetts mock me though), I needed something to whet my appetite.


Last year, I stumbled upon the Vermont 251 Club, while reading the yearly Vermont travel guide. To my understanding, the Vermont 251 Club was founded in the 1950s to encourage people to visit every city and town in the State of Vermont. There are 251 of these cities and towns. Some are easy to get to, since they are on major roads such as I-91, US Route 7 or VT Route 9. Others, are more difficult to get to such as Somerset, in southern Vermont, which involves driving on a rickety old forest road. Probably makes sense that Somerset's population is 5 (neighboring Glastenbury's population is 16).


There is an organization for the Vermont 251 Club, based in Vermont, naturally. Currently, I am not one of their members (I have not gotten around to paying dues), but I do keep track of what towns I've visited, and it does give me good reason to try to visit every town in Vermont. It seems to be a much easier goal to accomplish than visiting every town in my home and native state of New York. I currently have visited 219 of the 251 towns in Vermont, with the Northeast Kingdom being essentially what I am missing the most of. There are some other towns, mostly in the northern half of Vermont, that mock me as well.

My own tally of Vermont towns

Anonymous said…
Is there a club like this in NY State?
9:30 PM