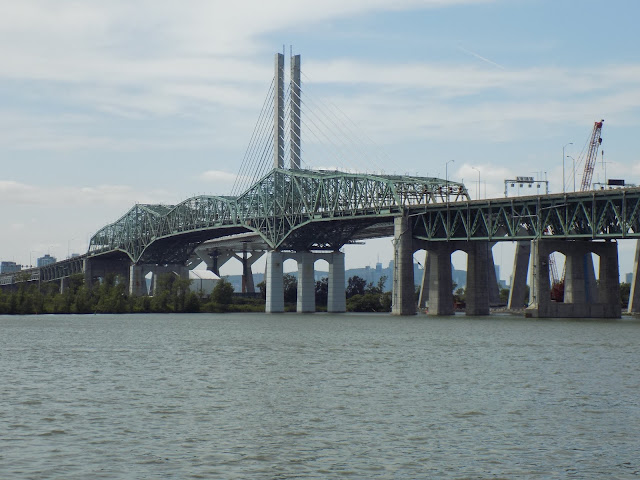 One of the vital links between the island of Montreal and its South Shore suburban communities, the 3.4 kilometer (2.11 mile) long Samuel de Champlain Bridge (or commonly known as the Champlain Bridge) carries Autoroutes 10, 15 and 20 across the St. Lawrence River between Nun's Island (Île des Sœurs) and Brossard. But the famed river crossing has a storied and tumultuous history, which over time has led to the construction of a replacement bridge.

On August 17, 1955, George Marler, the Canadian Minister of Transport at the time, announced that a toll bridge would be built over Île des Sœurs to the South Shore. At the time, the National Harbours Board (a since-departed Canadian federal agency) was put in charge of construction of the Champlain Bridge project, as well as the federal portions of Autoroute 15 and the Bonaventure Expressway. At first, the bridge was called the "Nun's Island Bridge," since it crossed over Île Saint-Paul, which was also known as Île des Sœurs (or Nun's Island in English). In 1958, it was officially named the Champlain Bridge in honor of Samuel de Champlain, who founded Quebec City in 1608 and explored other parts of what is now Quebec. At first, the structure was referred to as the Île des Sœurs Bridge as it touched ground on this island, but it was quickly renamed after Champlain in honor of the 350th anniversary of Quebec City.

The Champlain Bridge opened on June 28, 1962 without an official ceremony and an initial toll of 25 cents per crossing. At the time, the only approach to the bridge was from Wellington Street in Montreal. The Champlain Bridge had six lanes, three in each direction plus a concrete dividing median. The construction of the Champlain Bridge cost about $35 million in 1962. When you include the approaches and Bonaventure Expressway, the total cost of construction was about $52 million. 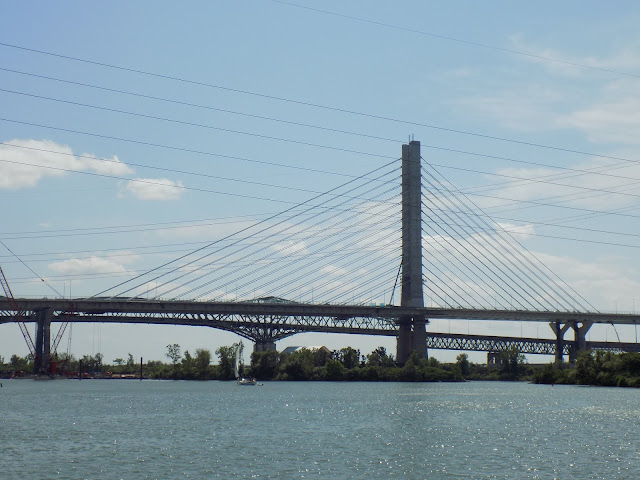 One of the busiest bridges in Canada, the Champlain Bridge was not handling high volume of traffic as well as it should have been. Approximately 50 million vehicles crossed the bridge annually, including 200,000 buses and $20 billion worth in international trade. The use of deicing salt contributed to corrosion and the degradation of concrete. Cracks were found on the bridge, such as a crack detected on an edge girder near the South Shore on Montreal in 2013. While current investments kept the Champlain Bridge safe until it was replaced, a new crossing was required for the long term.

So on October 5, 2011, the Government of Canada announced that the Champlain Bridge would be replaced with a new crossing. Several studies and reports were used to make the decision to build a new bridge, first examining bridge and tunnel options, whilst evaluating transportation needs, traffic demands, environmental aspects, implementation modes and financial considerations. Ultimately, a bridge was chosen as the replacement option. The bridge includes three corridors, with two, three-lane corridors for vehicle traffic and a two lane transit corridor with light rail transit capabilities for future use. The bridge also includes a multi use path for pedestrians and cyclists. Work also includes a bridge over the Île-des-Sœurs, widening of sections of Autoroute 15 and Autoroute 10, installation of tolling infrastructure and installation of intelligent transportation systems.

The new Champlain Bridge provides additional capacity and increase safety on one of the busiest bridges in Canada. The route is a major corridor for local residents and commuters as well as a trade route to the United States. The new Champlain Bridge is expected to have a 125 year design life, unlike the old bridge which was only open for 57 years before a replacement bridge opened. In November 2015, management of the north and south approaches of the Champlain Bridge and the federal section of Autoroute 15 was transferred to Signature on the Saint Lawrence, the consortium that is responsible for the New Champlain Bridge Corridor project.

Initially, the new bridge was to be a tolled crossing. However, the Canadian government made good on its pledge not to have tolls levied on the new bridge. On June 19, 2015, the Government of Canada announced that the total cost of the project would be $4.239 billion. From this amount, the project agreement between the Canadian government and the Signature on the St. Lawrence Group was valued at $3.977 billion, which covers the construction period ending in fall 2019, as well as a 30 year operation period. The project agreement includes the design, construction, financing, operation, maintenance and rehabilitation of the corridor, which includes the Samuel De Champlain Bridge, the new Île des Sœurs Bridge and the reconstruction and widening of the federal portion of Highway 15. 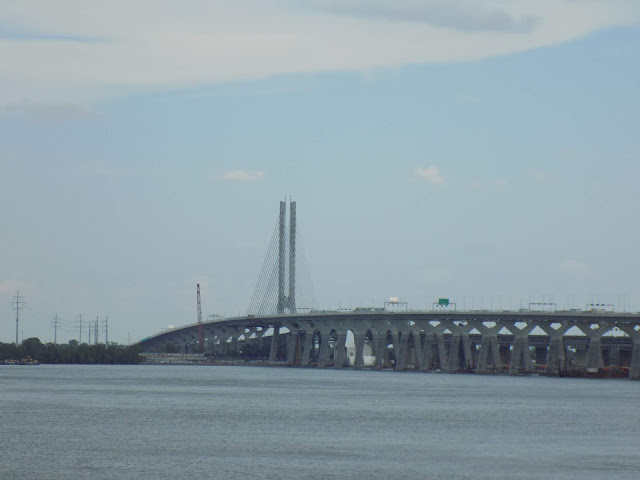 The naming of the new Champlain Bridge was not without some controversy, much like a fellow signature span being built around the same time period across the Hudson River in New York State. However, things were handled differently in Montreal. At one point, the new bridge was to be named after Montreal Canadiens legend Maurice "Rocket" Richard. However, the family of the legendary ice hockey player had requested that his name be dropped from consideration for the naming of the new bridge. However, cooler heads prevailed and experts had worked with the public to see if they wanted to retain the Champlain Bridge name (or the Samuel De Champlain name) for the new bridge. The Canadian public that was polled thought it would be best to retain the same name as to not incur further costs.

Finally, on July 1, 2019, the original Champlain Bridge was officially closed to traffic, and motorists started traveling on the new Samuel De Champlain Bridge. I had the chance to drive the new bridge a couple weeks after it opened. I've driven the old bridge in the past, which made me kind of squeamish as I drove along it. It's safe to say that I won't miss the old Champlain Bridge. The new bridge is quite an improvement, both in ease of travel and in safety as well. The new bridge was also built during a time of heavy infrastructure investment and construction around Montreal, with the reconstruction of the nearby Turcot Interchange happening as well. But for now, enjoy some photos that I've taken of the Champlain Bridge experience.

Anonymous said…
From Wikipedia:
The Airline Highway Association was organized in 1933-4 and was composed of representatives of Alameda, Santa Clara, San Benito, Kern and Kings Counties. Its purpose was to establish this "Airline Highway". In the Oakland Tribune article, (Tues. June 19, 1934 page 5. "NEW AIRLINE, HIGHWAY TO L.A. PLANNED) it states "the highway will follow the air line between the northern and southern part of the state as closely as possible". The use of the word Airline is confusing as we associate it with modern day transportation. If you look up air-line in the dictionary it is defined as an Americanism dating back to 1805 meaning "traveling a direct route"
11:04 PM