By Unknown March 01, 2011
It's been awhile since I've been on here-What can I say, I've been a bit busy lately. Most of you may or may not know that I've been routinely going down to New York City to shoot Punk and Hardcore shows-and that's been the largest part of my photographic output over the last couple of years. But, shows don't run 24-7, and I don't sleep the whole time between any given two shows; so that leaves me with time on my hands, and I really don't dig spending that time sitting around looking at TV in the hostel that I usually stay in.
New York City is a fascinating place. I don't mean just the usual touristy stuff either. Every corner you turn, you can find something interesting and unique. It's almost like a state unto itself: particularly as far as the roads are concerned. The signage is much different than the rest of the state, and the iconic double-guyed traffic lights aren't found anywhere else. In fact, new traffic lights follow the same design used for years. There are street lamps about that have been around since nearly the turn of the last century. And there are bridges.
One of the things about NYC is that it's reasonably pedestrian friendly, and despite cutbacks, it still has one of the best transit systems going. It makes it easier to get up close and personal with the city. Over the New Year's holiday, I had a hankering to go to Rockaway Beach, to see at least a part of the Rockaway Freeway. No problem, I hopped on the Subway and away I went.
I spent a good couple of hours walking around the area, taking pictures. I was particularly interested in the elevated railway over the 'freeway' that carried the 'A' train. 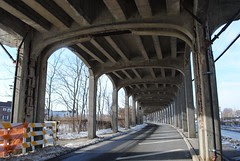 Again, last weekend found me with a nice day and some spare time, so I decided it would be a nice day to take a stroll over the Brooklyn Bridge. It's kind of an odd experience, because auto traffic flies across the bridge as if it were a freeway, yet the pedestrian deck is kind of like a linear park, even a bit festive with people selling T-shirts and souvenirs. Amazingly enough, there was hardly any graffiti-except on some temporary construction structures. Even the taggers respect the bridge. 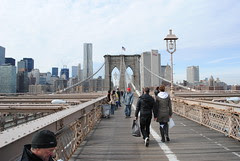 Since the Brooklyn foot of the Manhattan Bridge was only a few blocks away, I decided to cross back into Manhattan that way. The Manhattan Bridge is not as easily photographed from it's pedestrian deck, though you get some decent views from it, just the same; and there's a nifty portal at the Manhattan foot of the bridge. It lets out in Chinatown at Bowery and Canal-which is not too far from yet another bridge-the Williamsburg which I've crossed over on a couple of times. 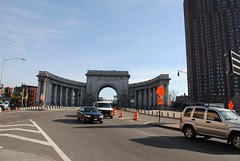 Next on my list is the Queensboro bridge-which should yield some interesting pictures. The 7 train emerges above ground at the bridge plaza, so I've had a chance to at least partially reconnoiter the area.