By Adam March 03, 2011
VDOT has completed the Environmental Assessment for the Henry County I-73 Alternative Route.  This route was pushed forward by the Henry County Board of Supervisors in 2007, VDOT released a preliminary impact study of the route in 2009, and the Commonwealth Transportation Board directed VDOT to do an environmental assessment of the alternative routing that December.

Henry County Supervisors had urged the study and possible routing as it ran I-73 closer to Martinsville's eastern edge.  The HCBoS plan would run about two miles longer and appears to cost more. 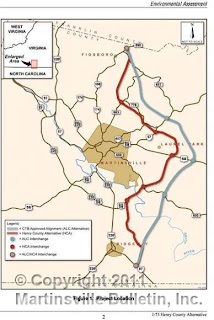 The alternative routing would utilize five miles of the existing US 58 bypass to the south and east of Martinsville.  That portion of the freeway would need to be upgraded to Interstate standards.  The initial planned alternative ran I-73 further to the east and parallel to US 220 and the southeast corner of the US 58 Bypass.  Both routes would meet north of I-73's junction with VA 87 east of Ridgeway.  The map at right drawn by the Martinsville Bulletin shows the two of the possible I-73 Henry County Routes.  The HCBoS route is red, the original VDOT proposal is in grey.  To my knowledge, this is the first clue of how I-73 will be routed south of Roanoke.

There is a third possible alternative route.  A modified version of the Henry County Alternative would eliminate two grade separations with the Norfolk Southern Railway and be about two tenths of a mile shorter.

Henry County officials are pleased with the results of the study, and have been touting the minimal impact to Fisher Farm Park in Ridgeway.  However, Virginians for Appropriate Roads (VAR) will be sure to have a voice in the matter once the official study is released and open for public comment.    VAR is opposed to any new construction of Interstate 73, preferring upgrades to existing US 220.   As part of their decision to drop an appeal on the planning process for I-73, VAR has the ability to challenge any future studies for I-73 "...that if a Supplemental Environmental Impact Statement is done for the project, Virginians for Appropriate Roads may raise road improvements and access management alternatives with respect to U.S. 220 in any judicial review challenge that the group might bring..."

VDOT has announced a open forum public hearing on the Henry County Alternative Route Study at the end of the month.  It will be held Tuesday, March 29 from 4-6 PM at the Laurel Park Middle School - 280 Laurel Park Ave. - in Martinsville.