Introducing PA 760! (and other PA End photos sent in)

Highway 760 has recently been signed and Joe Gerard was kind enough to send along some photos to myself and Jeff Kitsko.

Prior to the designation change, PA 60 ended at Business US 62 in downtown Sharon.  Here is how it looked around 2001 in a photo from John and Barb Bee. 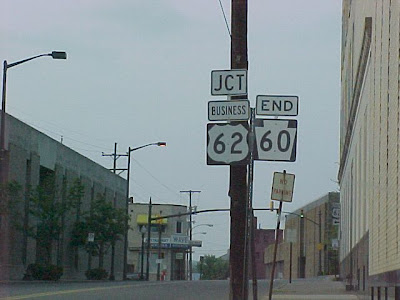 Nearly a decade later, it looks like the US 62 shield is the same, but the PA 60 sign has been replaced with its new designation, PA 760. 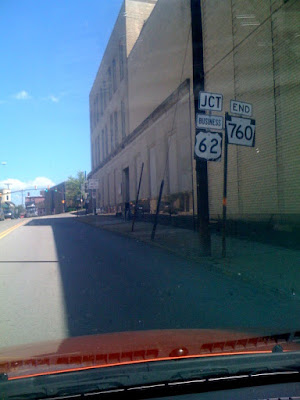 End and Begin for PA 760 and Interstate 376 are now found at the interchange with I-80. 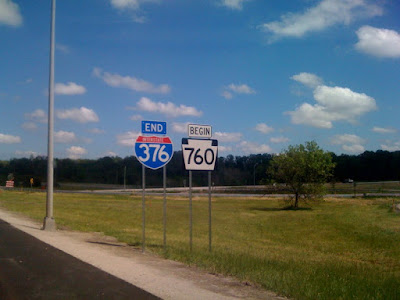 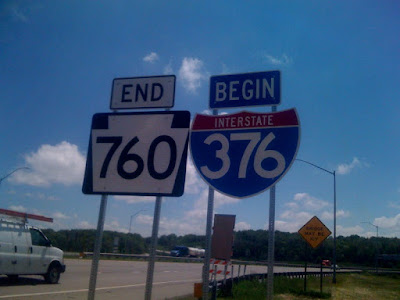 So it looks like I need to get to work on updating this page, pronto.  I haven't touched it since 2002!

I've always said that things come in bunches, and the day before Denny Pine sent me a few end signs of his own.

First, here's a shot of the new eastern end of US 224 in New Castle. 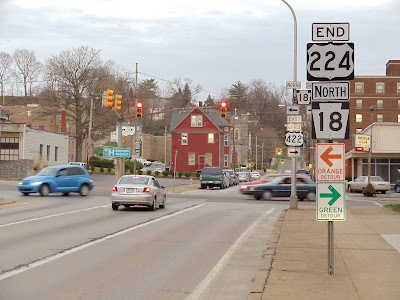 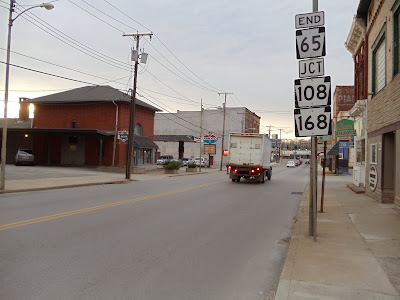 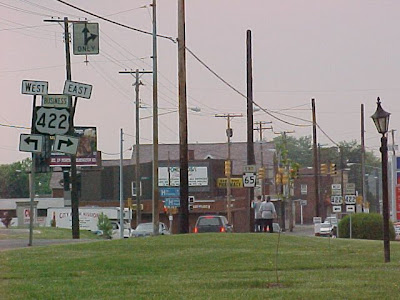 Finally, Denny heads all the way to the West Virginia border and to Point Marion where a new 'End' sign for PA 88 has been placed as a result of the construction of a modern bridge over the Monongohela River. 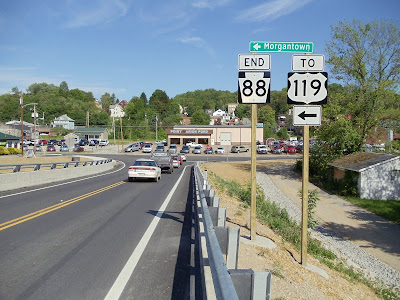 This gives me reason to work on a PA Ends update, especially since I haven't since 2007.  So stay tuned!

Anonymous said…
Looks like Denny beat me to posting the updated pics for PA 65 and US 224. Aw well, at least someone got it. (I can tell they were very recent, the PNC Bank branch seen faintly in the background of the new PA 65 terminus just converted over from National City back in November.) I still need to get to the PA 288, 388, & 488 pics. Though there have been no alignment changes, they didn't have end signs either until relatively recently. When I have a chance I need to get the updated PA 60 terminus in Robinson as well.
12:03 AM

Brian Powell said…
The block of Main Street between US 119 and the Point Marion Bridge is technically PA 88, so I really don't understand why PennDOT has the "End 88"/"To 88" signs posted as it does. What's the problem with acknowledging it as part of PA 88 on the signage?
2:39 AM

Denny Pine said…
Those are great photos of the BEGIN and END I-376 and PA 760 signs. I bet they were posted the day AFTER I went all the way up there to get the shots of U.S. 224 and PA 65 (LOL). I'll just have to get them next time I'm in that area for my own collection.

Speaking of PA 65, the BGS with the END designation for its Southern terminus which also showed JCT/TO I-376, I-279 and PA 28 has been replaced with another sign with only the latter three routes and no END 65 designation. I'll have to check to see if perhaps a new END sign was posted around that area or further down before the Fort Duquesne Bridge.

Anonymous said…
Well pinedrivein101 I know that near PA 65's southern terminus they're doing some ramp work around Heinz Field and the Rivers Casino, so that may be the reason why they took the old BGS down. I'll have to check when I have the chance.
1:40 AM