There was a notice by NCDOT that they were closing three left lanes going west around the old/new I-40/I-85 split east of Greensboro last Thursday night (5/21). I surmised that they were adding more to the I-85 signs that had become largely empty spaces since they removed the I-40 signage last September: 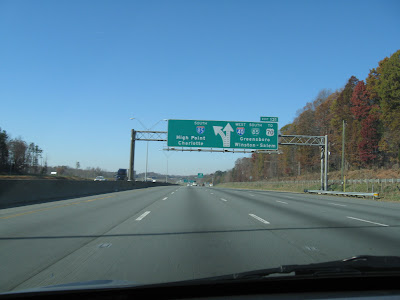 Turned out the assumption was correct, here's what the new signage looks like: 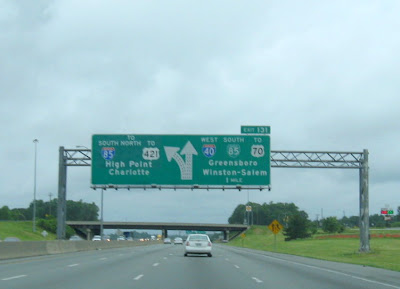 As you can see in this photo, and the closer view below, they've added a To US 421, since that route will be put on the Urban Loop, and a 'To North ( ). What is that for? 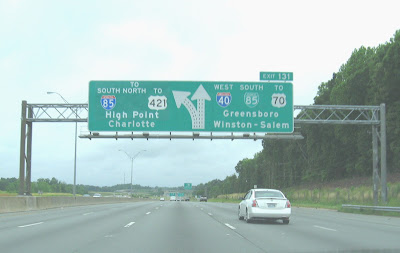 The only route that goes north from I-85 in its trip around the loop, now that the 421 route is changed, is I-73. But it will also go south from I-85 also in the future. Maybe that realization prompted the sign not to be put up? Maybe NCDOT is waiting until more signage is changed along the Loop? The next month or so may answer the question. If not, I may see if my contact who gave me heads up on when this project was starting can give me an answer.

Here's the photo at the split itself, the first few exit numbers beyond on once again I-40 are correct, but not all have changed: 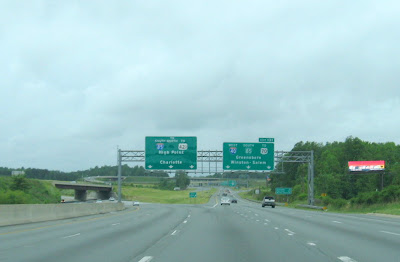 Signs under the I-840 bridge in the distance still have Business 85 numbers. Here though are a couple of the first signs with the new I-40 exit numbers: 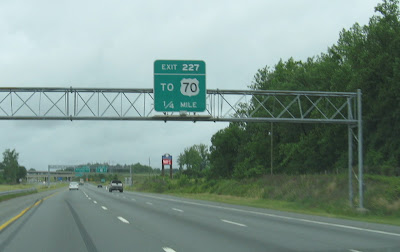 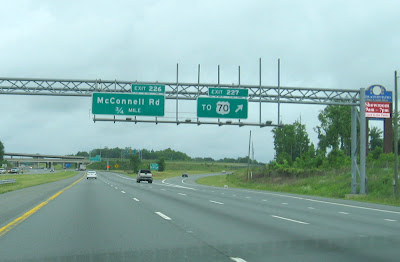 The new numbers for future I-840 and McConnell Road, the remaining McConnell road signs by the bridge in the background feature the old Business 85 and tabs for the former I-85 numbers. The next sign with a new number also features other changes as well... 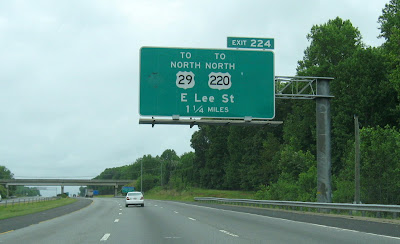 The shield for NC 6 has disappeared with the addition of the new exit number. The sign originally also had 'To North US 421' but that was removed when the route was routed onto I-40 a couple miles to the west. NC 6 was actually decommissioned about 4 years ago. Meanwhile, though the exit numbers have changed, and signs at the intersecting roadways have been changed to I-40, sign assemblies along the road have not changed, as the next photo shows... 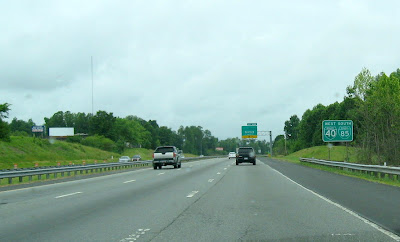 The shields are both still Business 40/85. Plus they have not swapped out the mile posts as of yet: 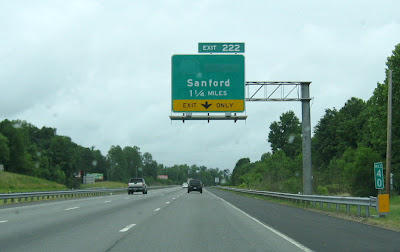 The milepost is that of Business 85. The new exit number is for what was the exit for US 421 South. According to the 2010 Rand McNally Atlas there are no plans to make the old route of US 421 into a business route. If you see some drops in the photo, this is where it started raining, which would eventually cut the photos part of the trip short. 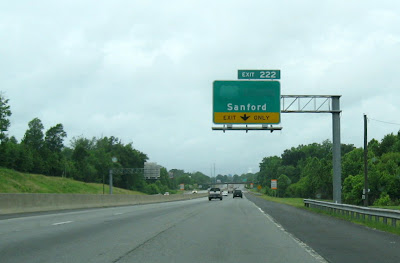 Another photo of Exit 222 where the removed US Route shield is more visible. 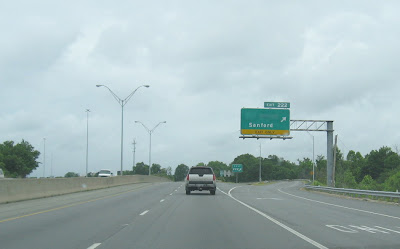 Another example of the lack of progress on the surface shields, the exit number is missing the US 421, but the shields seen beyond include a 'To North US 421.' The 6 shield assemblies in both directions (no photos) were still present beyond where US 29/70/220 enter. There were changes to the exit numbers though: 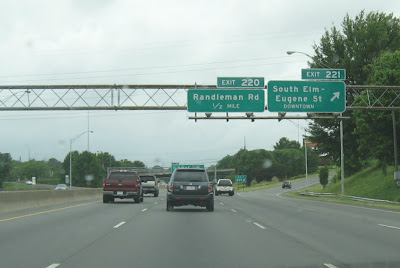 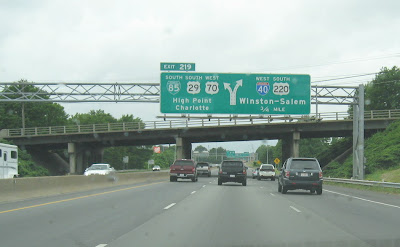 You'll notice that the exit tab is now on the left and that there is a missing North US 421 shield. US 220 is sent on I-40 only to take the next exit and cross now Business 85 again going south. 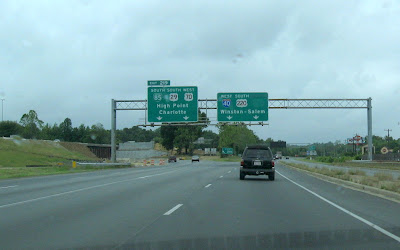 This was the last photo I could take before it started raining too hard, showing the split, the removed US 421 shield on the sign, but US 421 still included in the assembly beyond. You can also see construction on the new bridge that will carry I-40 west toward the interchange with Business 85. The US 421 shields have not been removed going further west to the other Loop interchange. There are also still a couple left going eastbound. The US 421 sign has been removed from the eastbound I-40 exit signs, and all the exit numbers have been changed, though there was a portable VMS put up indicating which exit to take for South 421. No other changes in exit signs were noted on the Loop.

They plan to close one direction of the whole I-40 section from the I-85 to US 29 the weekends of May 30-31 and June 6-7 to complete a resurfacing project. Hopefully, they can update the remaining signs at the same time. They can them move on to changing signs along the Loop. The project is supposed to be completed by July. My guess is they would prefer all the changes in place before the July 4 weekend, as they made these changes just before Memorial Day. I will hopefully be taking another trip, on a sunny day, to get photos of the remaining changes.

Mark Moore said…
Maybe the contractor here committed an error and meant to put south instead of north for I-73 and they caught themselves before putting I-73 there. If that's the case I'd except a "TO North I-73 Shield" for I-40 West through Greensboro added there as well
4:34 PM

mike said…
No wonder my Garmin had me going through no road land for a couple of miles!
10:56 PM

Anonymous said…
Does anyone know why the southern loop won't carry I-840? I think it'd be much easier to tell someone "To avoid Greensboro, take I-840 (the southern loop) until it dumps you back onto I-40". Every other city on the planet has a full beltway with the same number, why can't we?
12:49 AM

Unknown said…
One of the main reasons that 840 wasn't put on the southern part of the loop was that it would mean another shield to be put on the signs, which are already confusing as it stands now. This is why I-40 was moved back to the original route. Also, if 840 is a true loop, it can't be signed east-west uniformly, so some other system would have be devised like changing east-west to north-south at some point or use INNER and OUTER loop terms like Raleigh did with I-440. People find the latter confusing still, so Raleigh is getting rid of the INNER/OUTER stuff. Charlotte, however, includes INNER/OUTER along with N/S/E/W labels.

In my opinion, they should tone down the "TO" shields. They are everywhere now in Greensboro and really confuse me, especially when they precede the actual road's shield (like TO I-40 before I-73)
By the way "TO NORTH" on that I-85 sign is just wrong. No numbered highway is easier to get to going North on that path.
11:35 PM