Three days in Texas (with two hours in Oklahoma)

By Adam July 15, 2007
Early Tuesday morning, I flew out of Raleigh to Houston for a three day trip through Texas with my boss.

Wow is how I would describe Houston's highways and traffic. One of my colleagues at work said Houston is a concrete jungle of roads, and that is very accurate. The skyline is very impressive. 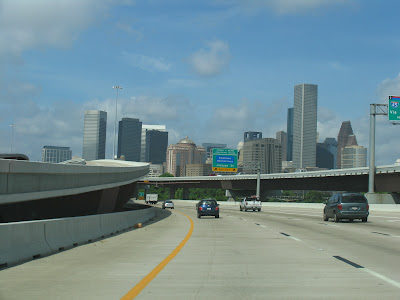 The photo is on US 59 South heading into town.

A couple of things I guess there is some kind of Red/Blue header on the HOV exits in Houston? Or is that something else.

South and west of downtown US 59 goes through a residential neighborhood with all the streets that cross over the highway on tied-arch bridges. Kinda neat. 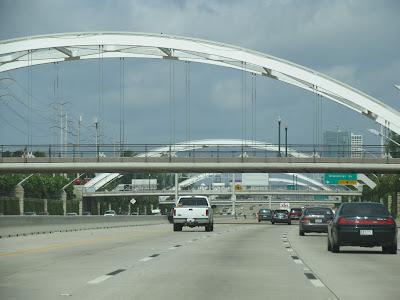 Saw a lot of the Alt 90 conversion to a freeway/expressway in and around Missouri City. In fact, one of our locations has the construction of the conversion right next to it.

Stopped for lunch at Pappas BBQ , which is a chain but the BBQ ribs were unbelievable.

The construction and traffic on I-10 West of Houston was extremely heavy. They are building a gigantic stack interchange at Texas 6. 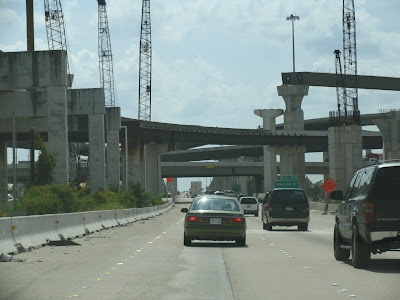 I-10 soon turns rural and numerous small towns line along the highway. How much of I-10 from Houston to Columbus was built on top of the old US 90?

Texas 71 was a quick and enjoyable ride from I-10 to Austin. There's not many lights until you get closer to Austin.

The TX 71/US 290 interchange with I-35 is being upgraded from a volleyball interchange to a stack. It looks like a few connections are all that are needed to complete the interchange.

Hit decent amount of traffic on the Highway 1 freeway before looping back into town for dinner.

We ate at Eddie V's steakhouse. And had one of the best steaks and atmosphere I have ever enjoyed. They say in Austin that you are able to go into some of the best restaurants in jeans, long sleeve shirt and a cowboy hat, it's true. Austin has the feeling of a small town that just happens to be growing city. The folks that live there have a lot of pride in their hometown. The people are laid back and the city is fun and most importantly genuine.

Day 2: Austin to Schertz to Austin to Round Rock to Addison, TX

Route: A lot of time on I-35 from Schertz to Dallas. from Schertz it was I-35 to I-35 E to the Dallas North Tollway to Belt Line Road.

Notes:
I-35 south of Austin is rather rural....it is a growing area, but still runs through a pretty much rural setting. There's still handfuls of button copy left in San Marcos and Schertz and that seems to be the case throughout I-35 in Texas.

Stopped for lunch at a great BBQ joint in Round Rock. It's called Pok-e-jo's and is just south of US 79. It is a classic Texas BBQ and although we were there at 2 pm...you can tell at lunch and dinner the place is hopping. I would recommend their spicy sauce with any of the various meats.

The more I see clearview the more I like it...at least in Texas. It's sporadic (although at DFW it is all over the place) but over time it will be more widespread in the state. For some reason, it looks a lot better in Texas as it does in other states like Pennsylvania. 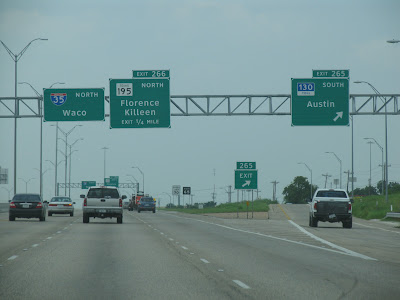 I was slightly surprised at how rural with tow lanes parts of I-35E was south of Dallas. In fact as a first for me, a crop duster flew right overhead at the I-35 split.

Dallas traffic wasn't heavy until on the Dallas North Tollway. Didn't get the greatest road vantage point for the Dallas skyline but here's a view. 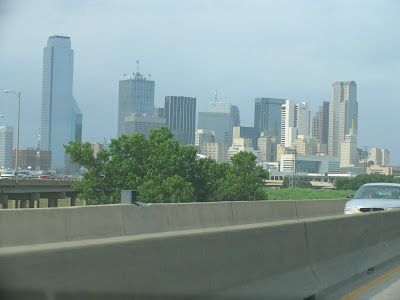 Ate dinner at the Cajun chain, Pappadeuax's. That was excellent I had the Horseraddish Halibut and enjoyed it. Also had crawfish for the first time...it's basically a blander version of lobster.

Notes:
After visiting a few locations, I had to drop my boss of for an earlier flight he needed to catch. That gave me about five hours to kill so I headed north to Oklahoma.

I was kinda surprised that I-820 northeast of Ft. Worth was only two lanes in each direction. It appears that widening will happen or is ongoing.

A surprise in Gainseville, button copy at the US 82 exit. 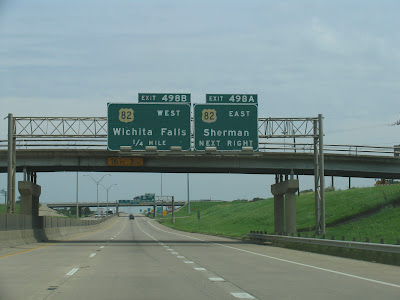 It appears that I-35 was built right on top of US 77 through Gainesville? The interstate goes right through the town at basically the same grade as the surface streets.

Stopped and got an Oklahoma state map and would have continued north towards Ardmore to get Carter County but decided in the interest of not rushing in DFW to exit at OK 32.

OK 32 runs through Lake Country and Lake Texoma. A pair of older bridges..one a pony truss and the other a through truss. 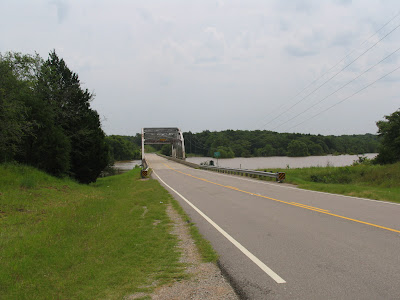 I've read that some do not like the new Oklahoma shields, but I personally like them. However, the three digit shields I will admit look rather goofy. I was able to get a few shield shots to help our Oklahoma Gallery. 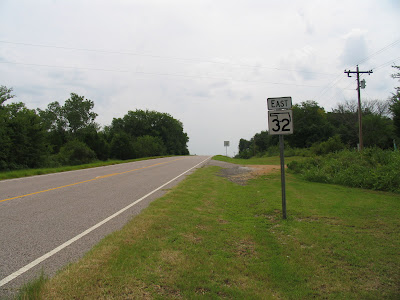 Stopped and got a Texas map at the US 75 welcome center.

I finally got to see what those wide median/future freeways look like in Texas. Texas 121 from US 75 for about 20 miles is such. There is some construction of the freeway just north of Plano into Lewisville.

No trouble getting through DFW in fact 'the toll road' is actually just the pay stations for parking and they let me through without paying both times (when I dropped my boss off) and when I went through to return the rental car which is just south of the airport.

There's a character to Texas that I have never experienced before (until just now). It is unique and enjoyable and I hope to explore more of the area on a more leisurely schedule. I have to decide on where I want to go on my fall vacation, and Texas may be the choice.

Accomplishments:
Gained 25 counties. Three in Oklahoma, 21 in Texas, and one in Georgia. I had never flown through Hartsfield before.

Plus took photos for the gn.com Oklahoma Gallery and may be just enough to start one on Texas.

Anonymous said…
You call that I-10 traffic heavy? Seems to me you need a dose of metro NYC. I call that midday traffic, and holiday weekend rush hour.
1:02 AM

Anonymous said…
I know this is a day late and a dollar short....

The original routing of US77 through Gainesville, TX is still there. If you are on I35 northbound, exit at #494. continue northbound. The road bends to the east and becomes Californai St (FM51). It crosses back under I35. Continue east to FM 372. Turn left (north). Cross under US82. The road will bend to the northwest and rejoin I35 just south of the ourlet mall at Exit #500
11:31 AM