By Brian July 14, 2007
NC 540 opened to traffic around 4:00 this afternoon -- at least, to most traffic. Access from both directions of I-40, as well as the continuation of the westbound I-540 lanes, was still blocked until about 5:30 as crews were painting lines and finishing up the last-minute preparations, so technically speaking the westbound section from I-40 to NC 54 was the last to open. However, all the ramps at the other three interchanges were open, so there was a bit of traffic already using the roadway before the last section was opened. 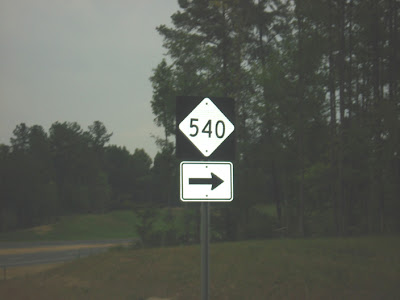 This is on the ramp to NC 540 from Davis Drive, just before a sharp curve to the right to intersect NC 540. 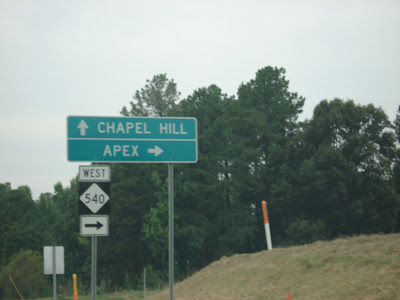 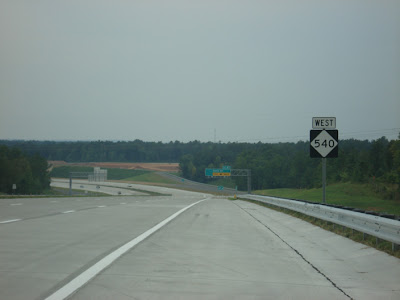 Once on westbound 540 from NC 54, a long hill descends toward the Davis Drive interchange. 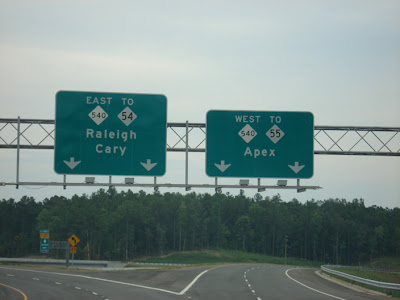 Southbound on the Davis Drive onramp where it splits to eastbound and westbound ramps to 540. The 540 shields are quite a bit brighter than the other two shields because of the last-minute numbering change, and if you look very closely in person (it's impossible to make this out in the picture) you can see the outline of Interstate shields underneath the NC 540 shields. 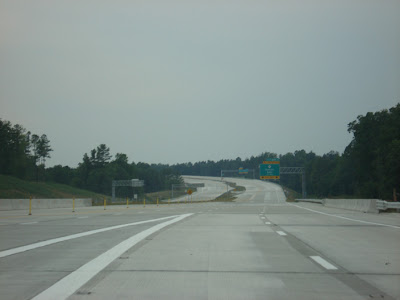 Coming westbound on 540 from Davis Drive, the two right lanes both become exit only lanes to NC 55, and the three left lanes end; the farthest left lane has already ended by the time the Davis Drive ramp merges onto the freeway. 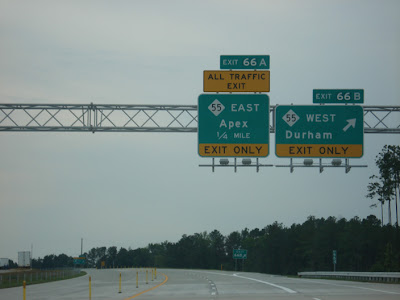 The NC 55 exit is split into two separate ramps, and if you look closely you can see the overlaid exit numbers that replaced the incorrect mileage. The overlays are very evident in person, especially on the exit signage at the gore points. 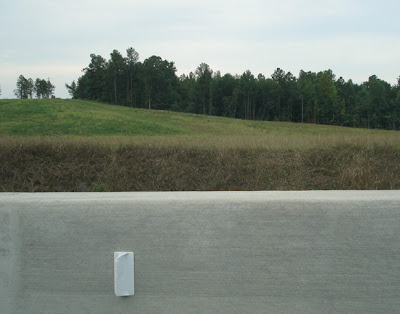 The new section has quite a few "bridges over nothing". This one will cross a future extension of Louis Stephens Drive, planned to be a reliever route to RTP running parallel to Davis Drive and NC 55. While parts of this road exist already, the section that will run under this bridge is nowhere near completion (as evidenced by the steep hill behind the bridge). 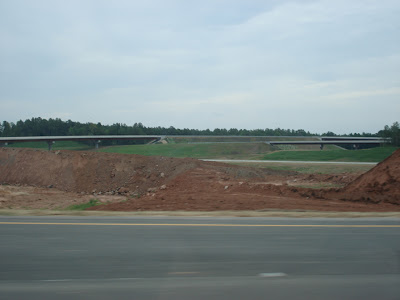 The Davis Drive interchange is designed for a future extension in both directions, and includes bridges over nothing to the south of NC 540. The white line through the middle of the picture is NC 540, and beyond that there are ramps on two levels; the lower level is the onramp to westbound 540, and the upper level is the offramp from westbound 540 to Davis Drive. 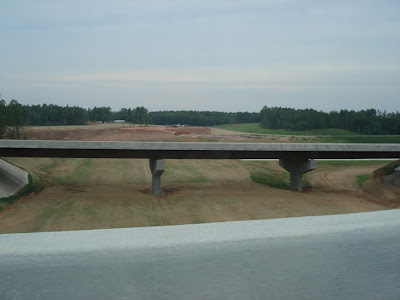 Taken from the westbound offramp, you can see the already-graded section south of NC 540 that the bridges over nothing cross over. This will not be part of the Triangle Expressway, the to-be-tolled section that will hook up with the Durham Freeway north of this interchange, but will be an extension south to Morrisville at the intersection of McCrimmon Parkway and Town Hall Drive. Stub ramp ends exist all over this interchange to accommodate this southern extension. 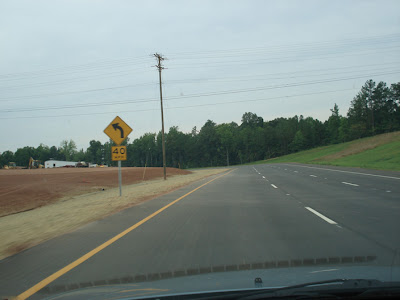 Northbound on the Davis Drive offramp, it looks like this will be a C/D roadway once the Triangle Expressway is completed as the right of way for the future expressway is to the left of the picture. As it is now, this three-lane ramp makes a sharp curve to the left to meet Davis Drive at Kit Creek Road. 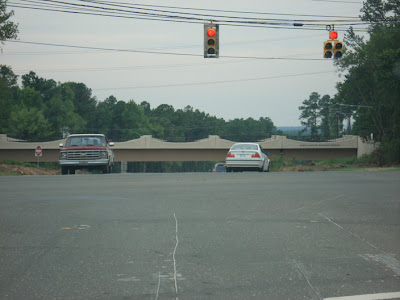 This isn't related to 540, but it's the new railroad bridge that crosses NC 54 in RTP. The old bridge was very low -- 13'4" -- and was frequently struck by overheight trucks. The replacement bridge, shown here, opened late last year. The writing on the bridge says "North Carolina Railroad Company", the owner of the bridge and the railroad.