By Adam June 29, 2007
We're not always going to have roadtrips or transportation commentary here at the blog.

In May, a group of us from the office went over to the DBAP (formally known as the Durham Bulls Athletic Park) for a game between the Durham Bulls and the Tidewater Tides. The DBAP has been open for over ten years, and is one of the finest ballparks in the minor leagues. I've gone to a number of games in Durham when I lived in Raleigh a few years ago. This was my first game at the ballpark since 2004.

Now unfortunately, the day had threatened rain but it wasn't until the game started that a steady shower began. So the pictures aren't the greatest. But it was great to be back at the ballpark, and it was just another thing that makes me glad to be back in North Carolina. 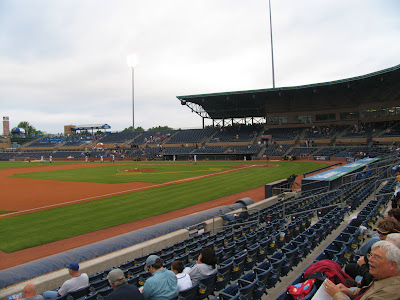 This is looking back at the main grandstand from the leftfield corner. Most of the park is not under cover. 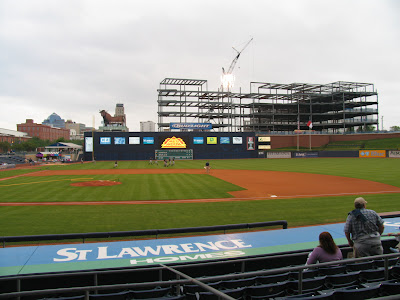 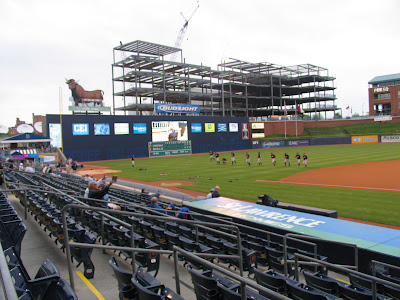 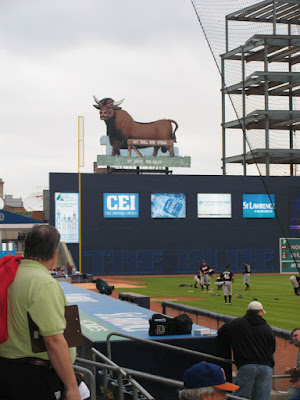 A number of views of the "Blue Monster" and a replica of the famous bull that was in the movie "Bull Durham." It reads, "Hit Bull - Win Steak. Hit Grass - Win Salad." When the Bulls' hit a home run, smoke rises from the bull's nostrils, its eyes turn red, and its tail wags. The Bull would be animated three times from Durham home runs that night. The Bull that was used in the movie hangs on the yard's wall out on the concourse.

The "Blue Monster" is a minor league replica of Fenway's Green Monster. The wall's height is 32 feet and the left field foul pole is 305' from home plate.

I'm really not sure what to think of the new building going up behind centerfield. Obviously, a steel framework is not going to fit in. So I'll wait until the building is completed to see how the ballpark's feel has changed. One thing, the new building will pretty much remove the Durham County Jail from the skyline view behind home plate. 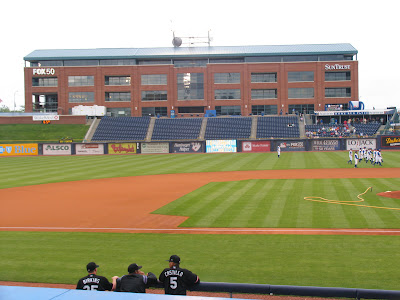 The building behind the right field bleachers and center field lawn seats (not used this night because of the rain, but a popular and inexpensive ($2) spot to watch the game) is the home to Fox 50 and the sorely missed Fox 50 Cash Cow. (The Fox 50 Cash Cow has cultural icon status in Raleigh) Oh, and it seems that SunTrust now has offices there (or uses it for advertising space) since 2004. 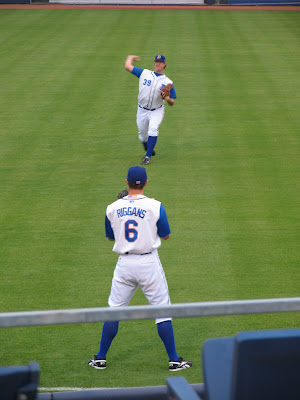 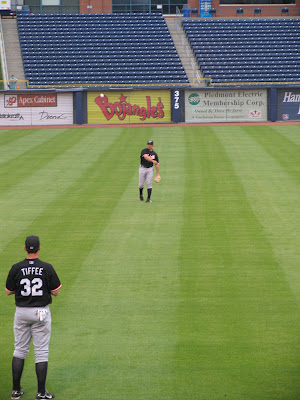 ...and the Tides during pre-game warm-ups. 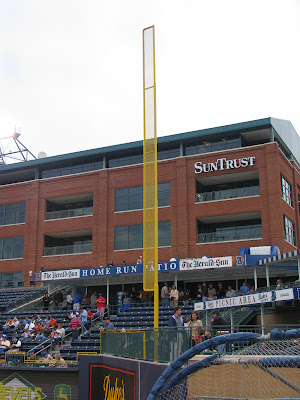 For some reason at minor league ball parks, I take a photo of the foul pole. I guess it's to show how close you can get to the field at these parks. 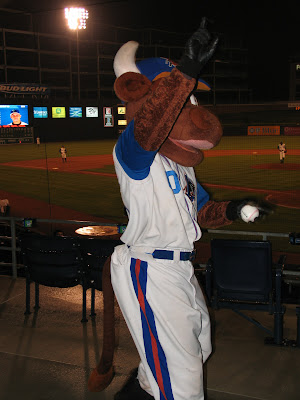 Of course, you can't forget a photo of WOOL E. BULL!