By Challenger Tom October 04, 2019
A recently trip to Riverside County entailed encountering the terminus points of what was the first California State Route 83.  The first CA 83 was one of the shortest lived State Highway designations. 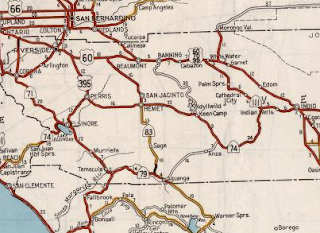 The original CA 83 was aligned on Legislative Route 194 between CA 79 near Aguanga north to US Route 60 in the Moreno Valley Badlands.  CA 83 was not one of the original run of Signed State Routes which were announced in a 1934 Department of Public Works Guide. 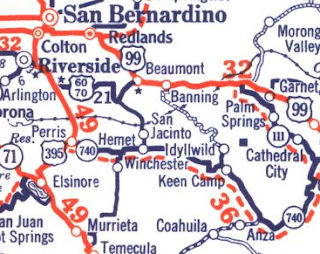 By 1936 US 60 had been moved to a new alignment through the Moreno Valley Badlands north of Jack Rabbit Trail and Gillman Springs Road.  US 70 subsequently was shifted to a co-signed route to the north on US 99.  Subsequently Jack Rabbit Trail was relinquished as a State Highway and Gillman Springs Road became an extension of LRN 194.  The new alignment of US 60 through the Moreno Valley Badlands can be seen on the 1936-37 Division of Highways Map of California.  Note; LRN 194 is shown on the 1936-37 State Highway Map as a partially constructed route with a segment of local maintenance. 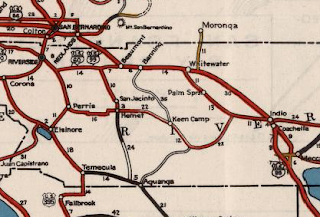 By 1938 State Maintenance of LRN 194 was complete and the route appears signed as CA 83 for the first time on 1938 Division of Highways Map of California. 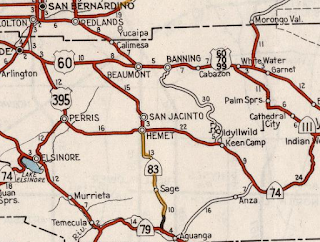 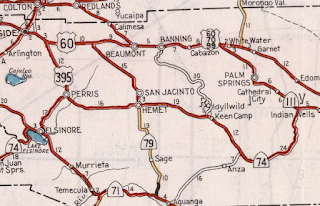 During the 1964 State Highway Renumbering CA 79 was shifted to a new alignment north of Sanderson Avenue via Lamb Canyon Road to Beaumont.  Former CA 83/CA 79 on Gillman Springs Road subsequently became the first CA 177.  These changes can be seen on 1964 Division of Highways Map of California. 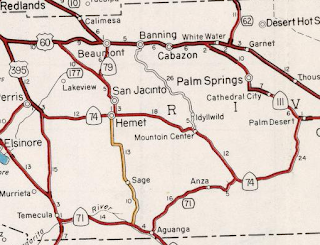 The first CA 177 on Gillman Springs Road was deleted in 1965 according to CAhighways.org.  What had been CA 83/LRN 194 south of Hemet was deleted from the State Highway System the year.  The 1966 Division of Highways Map of California shows CA 79 moved to the west towards Temecula (which ironically put it back on it's original corridor multiplexed with CA 71) onto a new alignment. 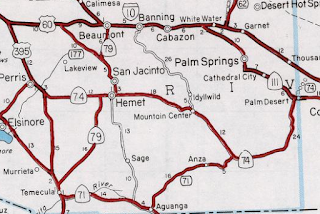 As stated above on my recent trip to Riverside County I encountered both terminus points of what was the first CA 83.  The photo below is from CA 60 (former US 60) westbound in the Moreno Valley Badlands approaching Gillman Springs Road.  US 60 would have looked substantially different in the time of the first CA 83 as it was expanded to a limited access facility in the 1950s. 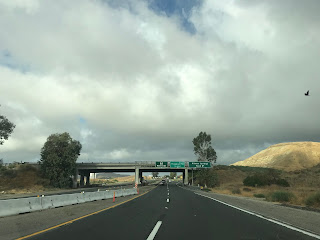 The photos below are from CA 79 eastbound approaching Sage Road which was the south terminus of the first CA 83. 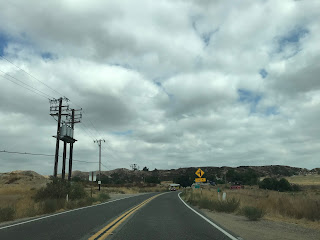 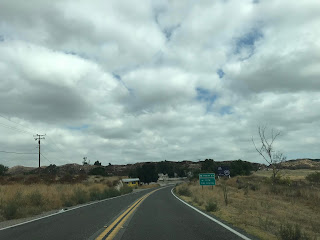 The designation of CA 83 was recycled during the 1964 State Highway Renumbering as a Route between CA 71 and CA 30.  CAhighways.org has a photo of one of the original CA 83 State Highway shields which can be seen on this Page.