By Challenger Tom April 24, 2019
On my recent visit to Chicago I attended a Cubs game at Wrigley Field. 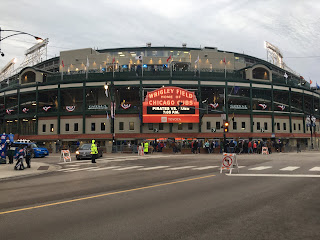 Wrigley Field is located in the North Side neighborhood of Chicago and is bounded by the irregular street configuration of; Addison Street, Clarke Street, Waveland Avenue, Sheffield Avenue,  The view above is from Addison and Clarke looking at the main entrance to Wrigley Field.  Below is a close-up view of the "Wrigley Field home of Chicago Cubs" sign. 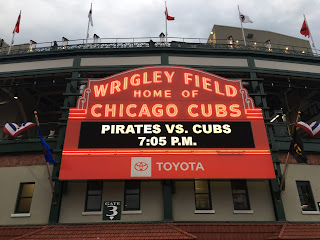 Despite recent renovations Wrigley Field still appears similar to how it would have looked in the late 1920s.  The upper deck of Wrigley Field was installed in 1927 and the signature ivy outfield fence was planted in 1937.  Wrigley Field remains the only Major League Stadium without padded outfield walls.

The video board was part of the recent Wrigley Field renovations and was installed in 2015. 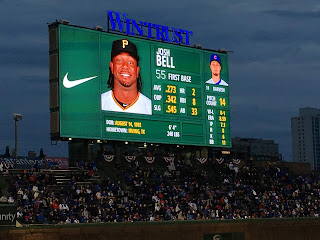 Interestingly rooftop viewings of Wrigley Field from nearby buildings is still very much active.  The Chicago Cubs originally attempted to block the roof top viewing areas with a screen in 2003 but began a 17% profit sharing agreement in 2004 which lasts until 2023.  Some of the exterior viewing areas above Sheffield Avenue can be seen in the picture below. 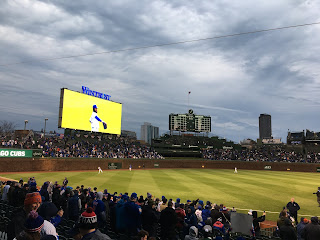 It still seems strange the Cubs won a World Series in 2016 after not winning one for more than a century. 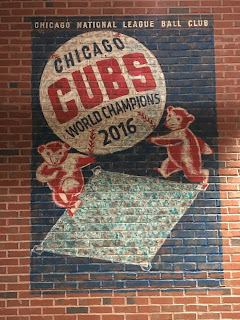 How the Cubs logo appeared in the 1908 season which also happened to be the year they last won a World Series prior to 2016. 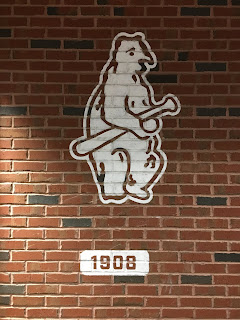 It should be noted that the temperature by the time the 7th Inning hit was 34F degrees with 15-20 MPH gusts coming in off of Lake Michigan.  I hadn't attended a Cubs game at Wrigley Field since the late 1990s and felt odd attending in conditions that would have expected more in a Chicago Bears game or at Ryan Field.  The Cubs ultimately lost to the Pirates 5-2.