By Bob Malme May 06, 2012
The first (mostly) sunny day in about a week was a good excuse to drive over to Canton to see what progress had been made in the lane adding project and related (and unrelated) sign updating projects along I-93 between Exits 7 and 1. They have largely finished heading southbound between Exits 3 and 1. This is the first photo I could take of the new exit signs for Exits 2 and 1 with an unobstructed view of the new left lane. 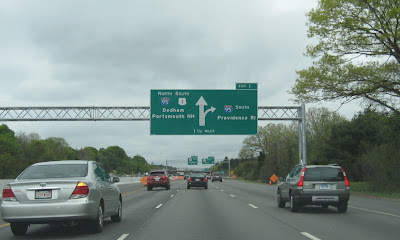 I was able to take a closeup shot of the assembly between MA 138 and I-95 that crosses both sides of the highway: 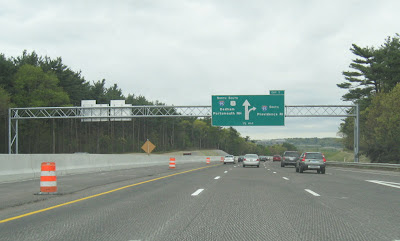 Notice the highway surface which has been roughed up in anticipation of a new (final?) coat of asphalt.

One of the overhead assemblies they have not put up is a 1/2 sign for the MA 138 Exit heading northbound. With the previous one taken down, one has a good view toward I-95 and beyond: 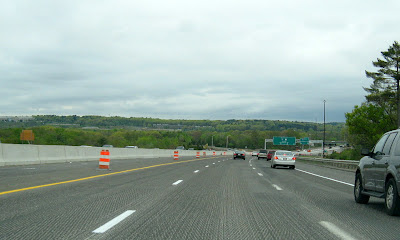 The barriers along the new lane were removed in the past couple weeks, an additional lane will open up on the right for the I-95 Exit. A closer look at the final signs for the I-93 Exit 1, showing progress in putting in the new median barrier in, almost now to the I-95 bridge: 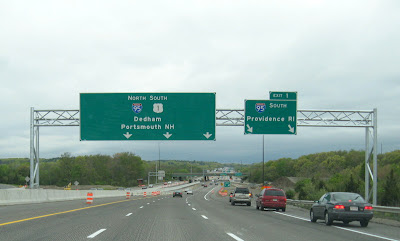 I headed onto I-95 North and then a quick turnaround at the University Ave, Exit 13 interchange. Heading back on I-93 North, this is a view approaching MA 138, showing final landscaping work being performed. A fifth lane will be added here between the on-ramp from I-95 North to MA 138: 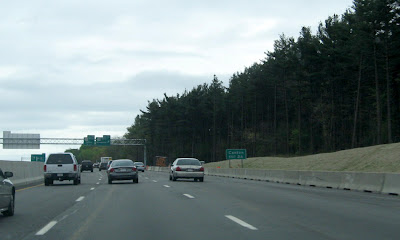 A closer look at the other side of the cross-highway overhead seen in the distance above: 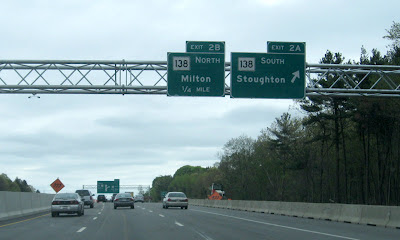 Guess they could think of no other worthy destination to put at the bottom of the MA 138 South sign.

There were no new signage to take photos of toward the MA 24 exit, so I thought I'd take, possibly for the last time a photo of the current signs: 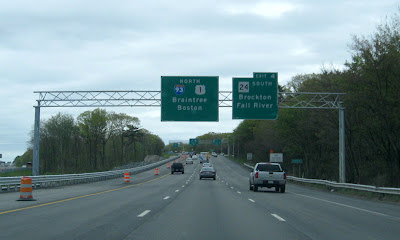 If you look closely to the right beyond the existing sign support you can see the foundation awaiting the new overhead signs, there is one on the left and also ones for Exit 3 heading south.

Further on up I-93 there is some evidence as to the future re-signing project getting underway. After most of the current overhead signs you see an orange tag which has the sign contractors name, Liddell Brothers, and a letter/number code. Here's the tag at the MA 28 exit: 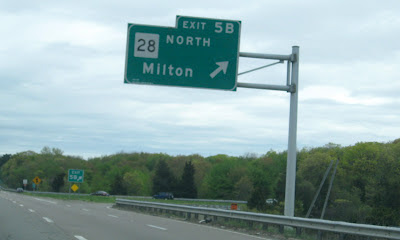 If you look closely anyway. The codes have OD then a number. The D referring to they type of signage? Here's another closer shot at a tag by the current 1/2 mile sign for Exit 6, MA 37: 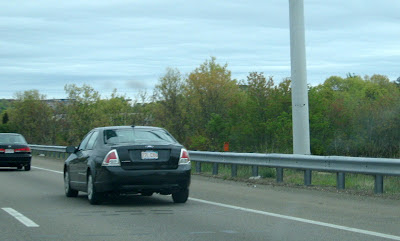 On the Southeast Expressway portion (I-93/US 1/MA 3) there are few of these tags at the overhead sign posts but many others at different places. Some have 'VMS' on the orange tag signs implying a place for a future permanent Variable Message Sign. You can see from this photo heading south at the 'Braintree Split' that the sign replacement project cannot come soon enough, for the one on the right: 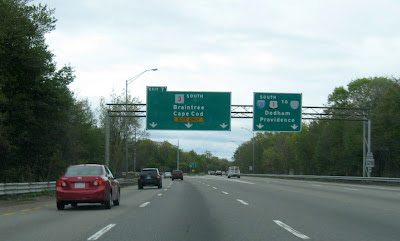 I hope to get at least one more trip to the area before I leave for North Carolina in June. Else I'll try to get some photos on my way south.