By Bob Malme December 12, 2009
Made my last trip of 2009 to check out progress on the construction of the I-74/US 311 freeway from High Point to Randleman during midday today (12/12). Based on the NCDOT's Construction Progress Report there hasn't been much going on along the Business 85 to Cedar Square Road segment the last two months as far as percentage complete goes, now up to about 81% complete at the end of November compared to 78% in September. There has been, however, some noticeable progress on the two remaining bridge projects as well on some of the roadway itself.

Going West to East (or North to South depending on which route you prefer) the first stop is the Baker Road bridge. Work has been completed on the bridge decks as you can see here (yes, they were working on Saturday, making up for bad weather maybe): 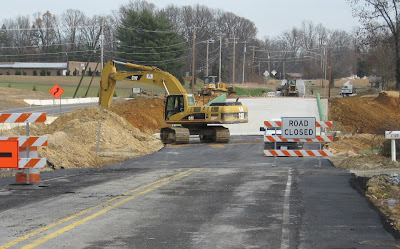 The bridge is capable of supporting traffic, as the truck driving across it shows here: 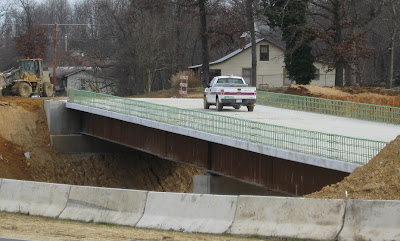 You can see they still have to connect the bridge to the pre-exisiting alignment of Baker Road and build the bridge walls and railings before being open to traffic. This could happen before the end of the year if the weather cooperates. 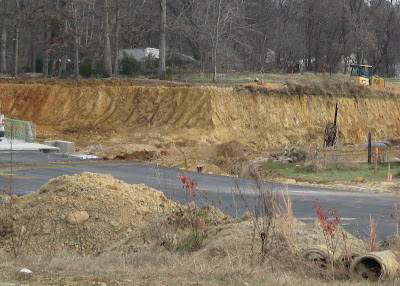 They are still working on getting the road down to grade south of the bridge and will start north when the bridge is opened and the temporary roadway to the north can be demolished.

Jackson Lake Bridge. Not much progress here west of the bridge, as you can see they still don't have a westbound roadway here, still just piles of dirt: 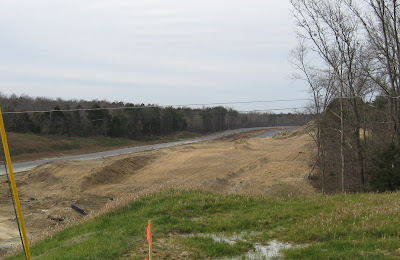 The roadway to the east toward the Kersey Valley bridge, however, is basically complete and can support contractor traffic as you can see below: 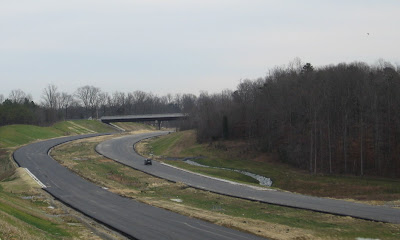 Kersey Valley Road area. Again little progress here. Some more excavation has been done to the roadway west of the bridge: 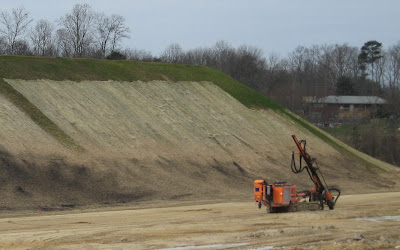 Notice less construction equipment and machinery present than last month by the graded slopes going eastbound. The view of the roadway between Kersey Valley and I-85 shows more work is needed: 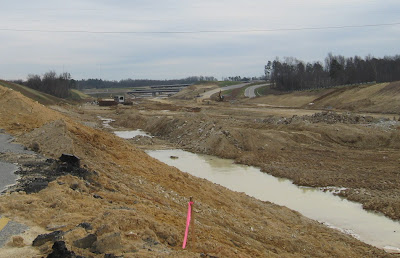 Most of the depressions are filled with water which, due to today's cold temperatures, had turned to ice. They are going to have to wait until this dries up to proceed. 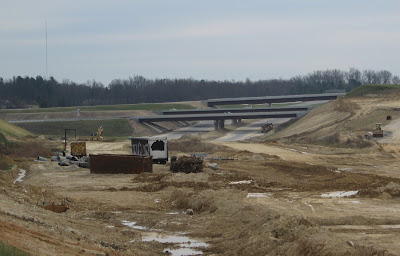 Another photo of the same area showing progress around the interchange offramp, it appears more grading has been done down toward the future eastbound roadway. And if you didn't notice before, the west wall to the flyover bridge has been completed: 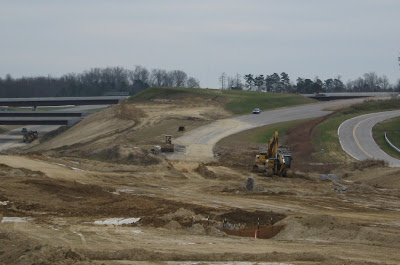 Tuttle Road. There has been more progress in placing guardrails along this section. Looking west you can see there are now guardrails on both directions of the highway: 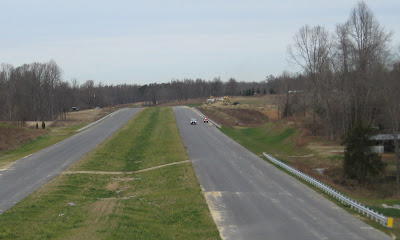 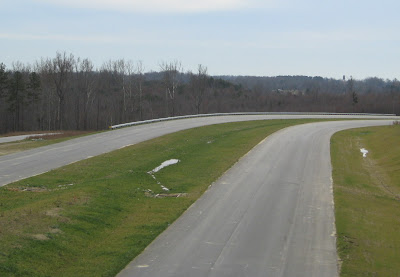 It appears that there is an asphalt layer capable of carrying traffic now from just east of the I-85 interchange heading east almost to Cedar Square Road, with a few exceptions. Notice the truck below is heading the wrong way, but demonstrates it is possible to get to near Cedar Square Road (that would be easiest way off the freeway). 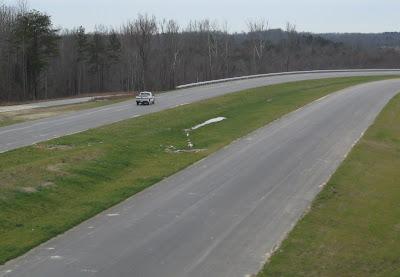 A closer look at the Tuttle Road bridge heading east: 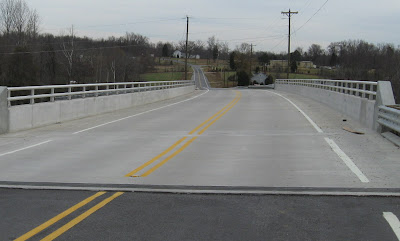 The Cedar Square Road bridge and Interchange. Most of the progress in the last month has been made here. First, the bridge has been opened: 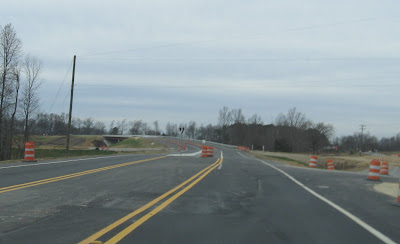 To the right is the old road alignment which will be access to Poole Road. (The connection has been made but the road was blocked by road closed signs, this wasn't preventing locals from making there way around them to access Cedar Square). Now crossing the bridge: 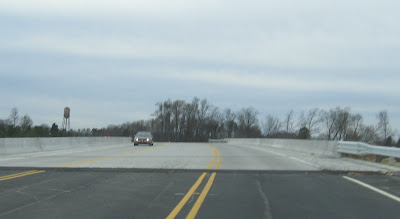 The bridge has 3 lanes, the center reserved for those wanting to make a left turn onto I-74 East, Which occurs just before where this photo was taken looking at the new intersection with US 311: 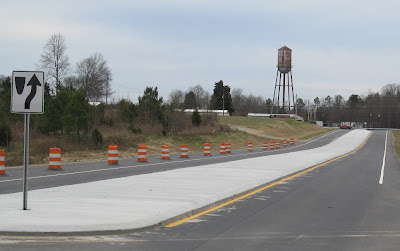 Second, progress on the on and offramps. For eastbound traffic these are opposite each other while the westbound ramps are on the south side of Cedar Square. Here's the progress being made on the westbound on/off ramps: 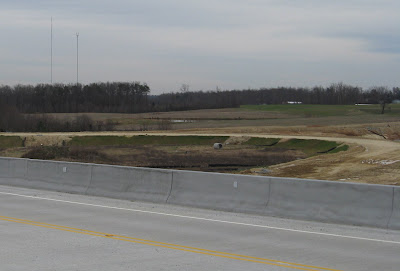 Here's a look on the progress of building the eastbound off ramp: 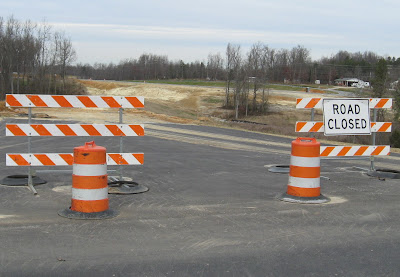 They still need to remove the old alignment of Cedar Square in the freeway's path before final grading and paving can be made.
Meanwhile all the construction equipment is at the end of the current road awaiting construction on the second part to complete the freeway to US 220: 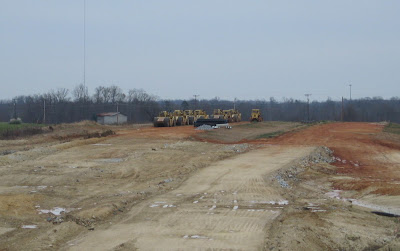 US 311. Some additional clearing in the construction area, and the start of one of the on or offramps, but little else: 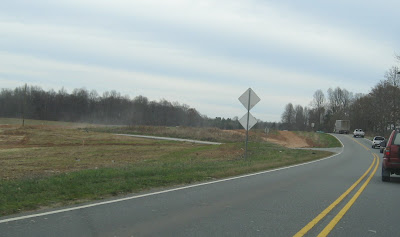 US 220. Some progress here in the appearance of a second center support in the median for the other flyover ramp: 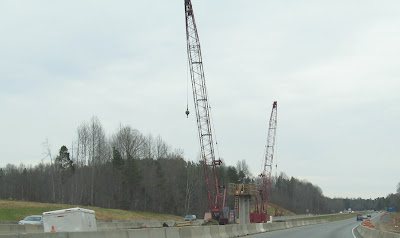 Here's progress on the first flyover support, plus clearing on the northbound side: 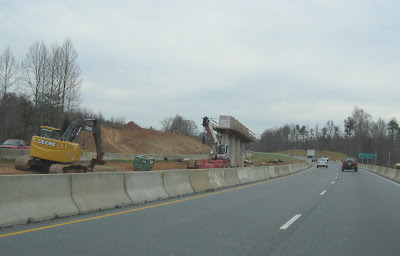 The wider view of the construction area, heading northbound: 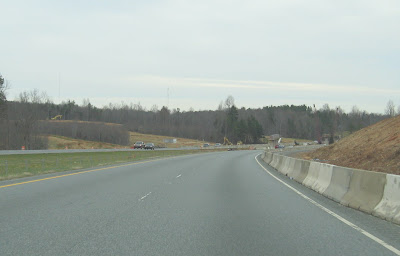 Progress on the future I-74 West Flyover ramp: 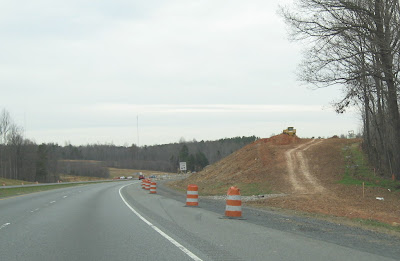 They are working also on expanding US 220 to 3 lanes (seen beyond the barrier) between Pineview Street and the existing US 311 exit: 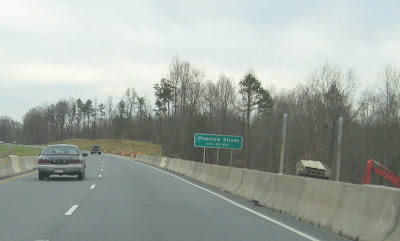 Notice the polls for a new exit sign. These also appear elsewhere along US 220, not just in the I-74 construction area implying another project installing new exit signs, hopefully before the I-74 project is finished and with I-73 mileage based numbers.

My next trip will be after they open the new rest areas/visitor's centers near Seagrove on I-73/74 sometime in January (current completion date is 1/21/10). I'll let everyone know when they are open, in case anyone else wants to come along and tour them.