By Bob Malme June 26, 2009
NCDOT posted an announcement this afternoon that they were closing 2 of 3 lanes on I-40 East at the Loop/PTI Airport/To Bryan Blvd. exit to post signs. This is hopefully to change the signs finally on the western I-40/Loop junction. Too bad I didn't know about that this morning when I went to Greensboro to photograph other recent changes, and they are many.

Starting on the I-85 Loop with the US 421 exit. The exit for US 421 North Greensboro, now just reads Greensboro, as seen below: 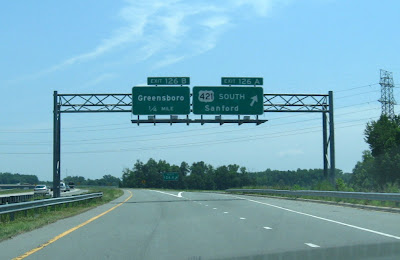 This is heading on the C/D ramp northbound but the Exit 126B sign south says the same thing.
They have not changed any of the ground signage which still indicates this part of the Loop is I-40/I-85.

The I-73/I-40/I-85 'Interstate Triplex' Sign is no more. Signage has been changed along the highway itself to reflect the new reality. The sign now only has 2 interstates and 1 US highway shield. Note they have not done any changes to the US 220 exit (either on the Loop or US 220/Future I-73 itself: The I-73/US 421 and I-85 split. Signage has been changed here as well, the first and second BGS are like this: 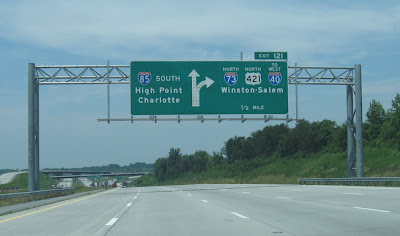 The signage at the split itself where you see the first mention of I-40: 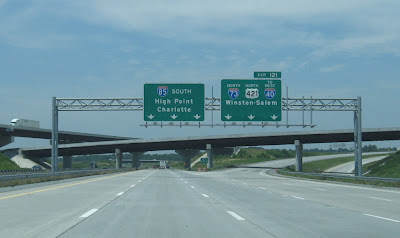 The signs on the I-73 C/D ramp to the right have not been changed until you reach the last one at the Grandover Parkway and Groometown Road exit (from I-85): 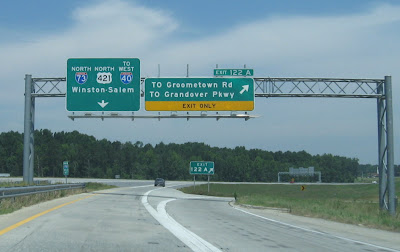 To the left below the sign you can see an I-73 shield milemarker (97).
Like on the I-85 portion the shield markers along the highway have not been changed. The exit numbers on most of the BGSs have, though the signs may not be completed. This is now the exit sign approaching Wendover Avenue and I-40 on I-73/US 421 North: 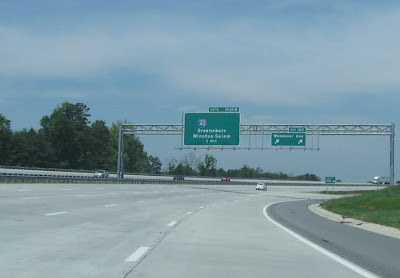 The overhead signs at the Wendover interchange have been changed, but they are not perfect. As seen here: 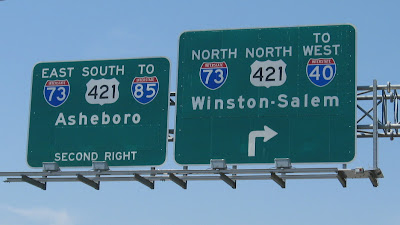 I-73 East? This is for the westbound exit, it's the same eastbound. The ground mounted sign for I-73 East has not been changed heading west. They forgot to take the 'East' down with theI-40 shield. The ground sign assemblies are correct: 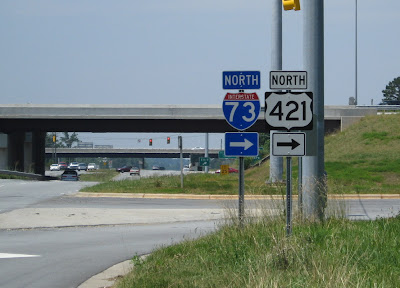 As I stated they haven't completed the changes of sign going north at I-40: 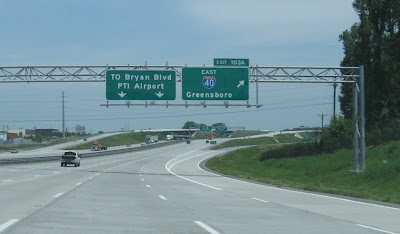 The sign for westbound I-40 has been taken down but not replaced. Don't know if they'll change the To Bryan Blvd./Airport signage, though the road north of I-40 is officially I-73, currently they have a new exit gore sign marked 103B but the sign points to the right, not the left to I-40.

There's better news heading south on Future I-840. These signs have been correctly revised:
The first one could have used better spacing: 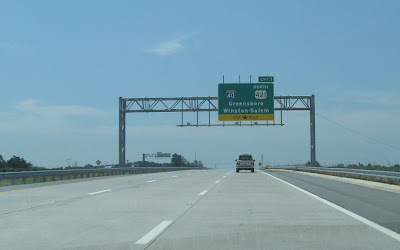 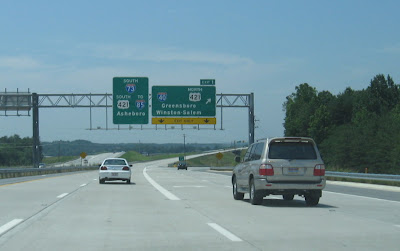 The Wendover Avenue exit number has been revised here too: 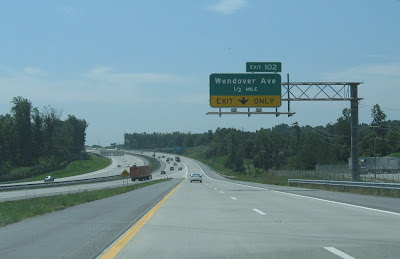 However, the sign on the left in the distance has not changed and still reads I-40/I-73.

Here's a closer look at an I-73 mile marker showing NCDOT believes the route will travel at least 100 miles in the state: 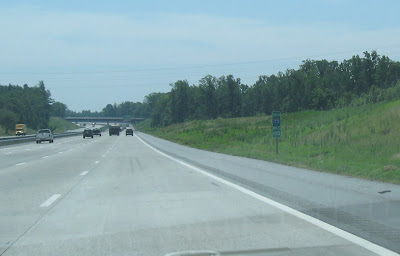 The next exits have been slightly altered besides numbers. Before Business 85 and I-85 had different numbers, now they are the same exit, 97 A and B. 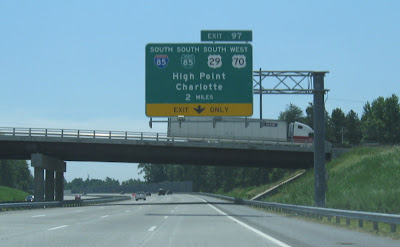 What's this? From the left hand BGS you would believe I-73 travels beyond Business 85. The implied multiplex though is never to be: 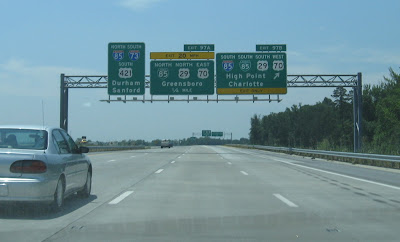 And once again past this exit, I-73 disappears. The only hint of its presence is the I-73 Mile 96 post you can spot just before the US 220 South Ramp: 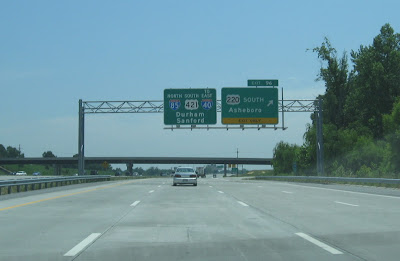 Again, I-73 exits upon itself, the exit tab should rightly be on the left BGS, maybe that will happen when I-73 becomes official south of the Loop.

I will not be able to get to Greenboro for the next few weeks at least, so if anyone wants to take photos of the new signs that are supposedly being put up tonight (6/26), you are free to do so.

Comment: The I-73 exit on the Loop (if it was marked) is 96. The I-73 exit on US 220 north is 78(B). This means there is an 18 mile difference between the two milepost systems carrying I-73 (and I-74 in part). NCDOT should, as they've done on Future I-74 in the High Point area, renumber the exits along the US 220 corridor to match I-73's mileage. Up until now there wasn't a consensus as to where I-73 would enter NC, nor what alignment it would take. Now that this is settled, and milemarkers are up elsewhere on the Loop showing NCDOT's confidence in its I-73 distances, it would be best to change the numbers along the entire corridor to I-73 miles, despite the route not being complete.

Georgia Road Geek said…
Nice photos, Bob. Wasn't able to do any "roadgeeking" around Greensboro due to Toastmasters, but hopefully, I'll make it out that way again soon, and if I do, let's all hook up for lunch. :)
10:23 PM

S Summers said…
Nice to see the changes moving along. I see the changes have not been made at US-220/I-73/85 yet, according to the plans there will be an "End I-73" shield placed on SB US-220 south of the interchange on the South end.

Anonymous said…
Forgive my idiocy, but can someone help me figure out a few things about the "old," "new old," and "new" routings through this stretch?

I'm not confused about the routings of the interstate highways, except for whether I-73 and I-85 ever really share a roadbed as implied by a couple of the signs. I am, however, confused as to what are the former and present routings of US 421 and US 220 (has that even changed?), as that issue seems to keep popping up.

Also: has anyone (at NCDOT or elsewhere) ever considered signing the entirety of [planned I-840 + the newly-built southern loop] as I-840 (or possibly something better, like I-885) to encourage through traffic to avoid "Death Valley"? (Then again, that would probably face fierce local noise opposition...)
12:23 PM

Anonymous said…
I use Future I-73 and Future I-840 all the time, and you mentioned something about that stretch of road officially being I-73 now, which I 100% think should be. It's very annoying to tell people "Take 'To Bryan Blvd'"...why wasn't this just signed as real I-73? Does anybody know if they're going to put the real signs up anytime soon? I'd hate for it to be "Future" for the next 20 years.
4:59 PM

Bob Malme said…
According to the FHWA, AASHTO, even the NCDOT State Map, the section of the Loop north of I-40 to Bryan Blvd is I-73. So it should at least be marked I-73, Future I-840, as it's shown on the NCDOT map. Maybe Mr. Summers has plans of that area and can shed some light on whether the plans show sign changes in that area.
9:12 AM

Anonymous said…
I don't understand why they wouldn't shield it I-73 in the first place. And now they're doing all of this sign work, but not changing those signs. I'd love to sit in on a NCDOT meeting some day and see the masterminds at work. Why have a big 6-lane highway with no name except "TO BRYAN BLVD"?
10:34 PM

Anonymous said…
I once designed signs for North Carolina and I for the life of me can't understand how after this many years that overhead still says 'To Bryan Blvd'
8:56 PM