By Bob Malme June 14, 2009
I took a Flag Day road trip west to check out progress on I-74 around High Point and, along the way, see if any progress had been made since my last trip with resigning I-40 through Greensboro.

I-40 Greensboro Signing
I thought the road closures the last 2 weekends between the I-85 loop west to Death Valley would allow for replacement of some of the ground-mounted signage, along with repaving of the road. Sadly, that was not true. Everything that had not been changed as of 3 weeks ago is still the same. This is also true of the signage along I-40 west of the Business 85 split, still overheads with US 421 and US 421 signs accompanying I-40, though at the entrance ramps I saw, there were just I-40 shields, don't know whether this is new or not. Same story on the SW portion of the Loop, no change, but there were areas around some ground mounted exit signage were orange barrels had been placed suggesting lane closure for some future work. Disappointed, I headed down I-85 south to I-74 construction and was pleasantly surprised when looking in the rear view mirror that they had changed signage on I-85 north approaching 'The Maze'. The first sign change you come upon is this: 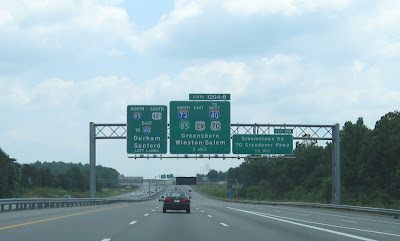 Notice there's a missing shield again, East [ ], I believe that was where the Business 40 shield was, or it was meant for south 421 and they discovered the error. The problem with I-40 in the middle sign was solved with adding a 'To', the left sign is new with Sanford now being a control city. The next sign solves some of the problems of the previous one: 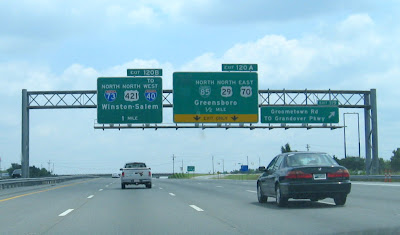 Here you can clearly see where the 'To Business 40' shield was removed. It's good to see I-73 being the first shield on a BGS. The sign shows the complete options for 'The Maze': 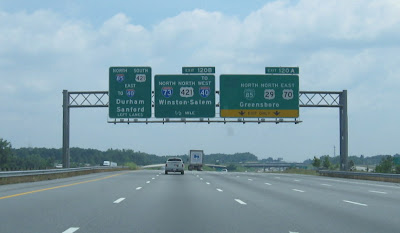 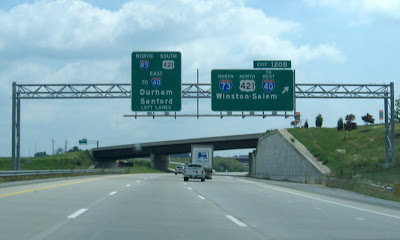 As for I-74 construction. The newspaper report earlier this week indicated the project was ahead of schedule. This is more obvious in some places than in others. The view from the Tuttle Road bridge, the first bridge to be completed, shows definite signs of progress: 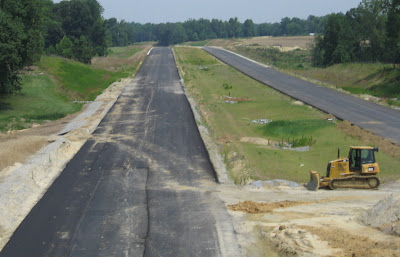 View looking eastbound, at least a couple layers of asphalt have been laid down. In contrast, the view from the latest bridge to be completed, Poole Road, shows more progress is needed: 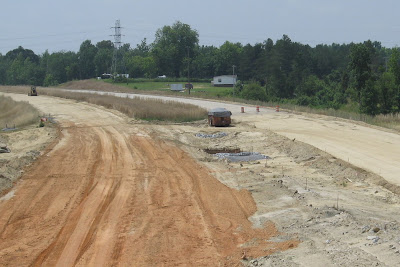 They are just starting on the final bridge of the first section of construction, that at the Cedar Square Road interchange: 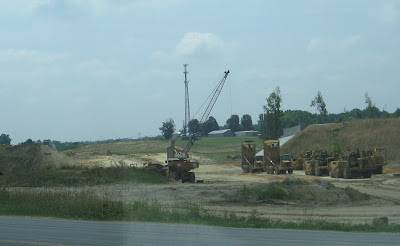 A new road will be built south of the existing one to take traffic over I-74/US 311. There was some progress to be seen on the flyover ramp from I-74 east to I-85 north. Going under the bridge on I-85 North shows that it looks largely complete: 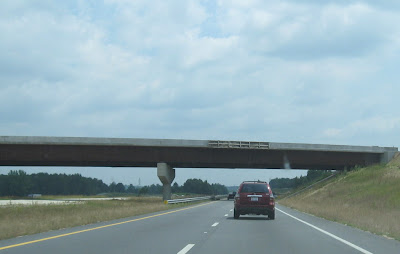 While a view of the flyover ramp shows progress as well since my last visit: 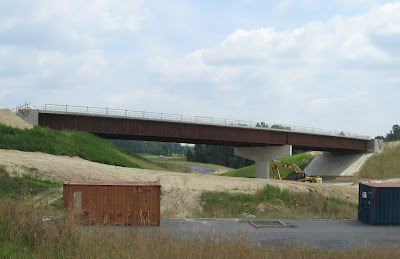 Notice how the ramps in view, as well as that from the flyover to I-85 have been paved. The pavement extends about 1/4 mile to the east. They have also paved the western side of the NC 62 bridge, and I assume the rest will be paved shortly. For photos of this bridge and other photos of I-74 construction, go to Segments 6 and 7 HERE, I hope to have all the new photos up by the end of the week.

Bob Malme said…
An update. Based on a post in the Urban Planet's Triad area blog from yesterday, NCDOT has begun changing the signs at least at the intersections along the SW part of the Loop. The problem the poster noted is that they simply changed shields, not directions. I-40 was replaced by I-73 and then a US 421 was put in I-73's place. The problem though now is the sign reads 'East I-73 South US 421 to I-85.' They'll have to send someone back to fix the mistake, hopefully soon.
6:56 PM