Since there wasn't anything too new or interesting going up I saved my photos for new signs that had been put up along MA/Pilgrims Highway between Exits 11 and 20 since my last visit. The original signs from Exit 12 to 15 were ground mounted. The new ones are also except at the interchanges themselves where they've been replaced by cantilevered signs such as: 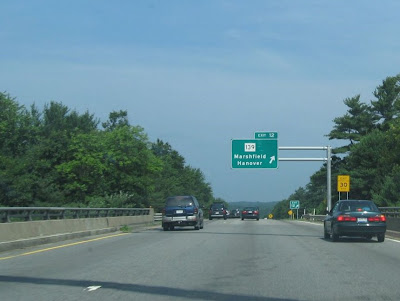 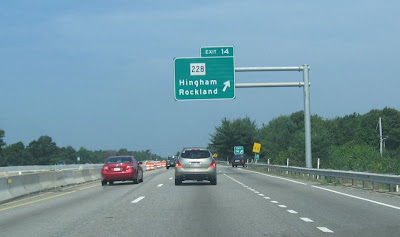 The original destinations listed were Rockland and Nantasket. Hingham was on a secondary destination sign, which now lists Nantasket. The other noted change is for the following exit 15, which originally northbound only listed S. Hingham, S. Weymouth. It is now: 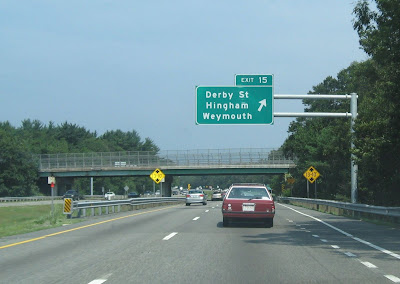 They also changed the wording for Exit 19 which simply said 'Quincy, T station. Many motorists thought the sign implied one destination, the Quincy Center MBTA station, which it did not. It was replaced with the following with the addition of Burgin Parkway which goes to Quincy Center and the T station (Quincy Adams) separated by a line: 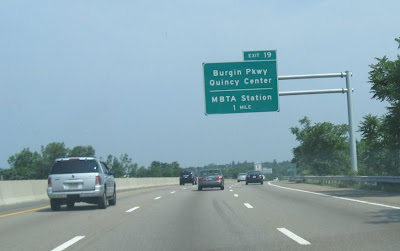 The most interesting signage is the replacements for the I-93 interchange, Exit 20. Individual signage for I-93 North and South has been replaced (or will be replaced, the 1 mile sign seen on Steve Anderson's BostonRoads site was still up as of July 20) by diagrammatic signage: 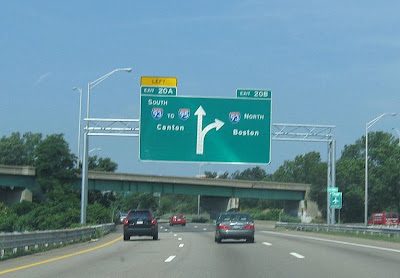 The other most noticeable change is the inclusion of only the interstate routes, not the other highway designations (US 1, MA 3) from the signs. This is due to past MassHighway signage practices. For a greater explanation of this and to see additional Exit 20 signage and also larger versions of the photos here and additional ones, please go to my Massachusetts Highway Photos Page.

Some other Mass. highway notes, no photos unfortunately:
With the replacement of the Sagamore rotary with an interchange, MA 3 northbound is Exit 1A off of US 6 and US 6 East exits itself as Exit 1B. The MA 6A exit both ways is Exit 1C.
MassHighway had a project that was repaving the SE Expressway from Savin Hill to the Braintree Split. At its conclusion a sign replacement project will start along the same section and continue along I-93 to Randolph this fall ( have a photo of a sign to be replaced on my photo page).
There is a cutout US 1 shield at the I-93 end of the South Boston Haul Road pointing to the ramp to I-93 south, the MA 3 sign is missing.
The I-93/US 1 North Mass. Green signs at Columbia Road have disappeared, they still exist at the southbound ramp.
They have added an overhead South I-93/US1/MA 3 small overhead sign south of the Mass. Ave exit, and have an additional overhead sign assembly with space for one about 1/4 mile south of that.
The Big Dig tunnel ramp to I-93 South from Leverett circle was the only ramp that included additional signs for US 1 and MA 3 posted on the BGS support poles.

The route back was basically the reverse as the way up, except I continued on I-81 South through Virginia to I-64 then I-64 East back to US 29. I also took US 29 further south to Greensboro so I could check on I-74 progress for my previous post.

If there are other questions about what I may have seen on my trip, let me know.

Steve A said…
A few weeks ago I finally got to try the Burgin Pkwy. exit, after it was re-signed from the freeways. Well, guess what - the old signs are still up on the exit. As a sign guy, I thought it was worth it.
10:15 AM