By Adam December 01, 2007
Bob Malme, Dave Filpus and I took a roadtrip checking out the most recent news in Eastern and Central NC Interstates today. In other words, we went to see if I-795 was signed, the recently opened I-74 in Maxton, and some of the construction of the Ellerbe Bypass. 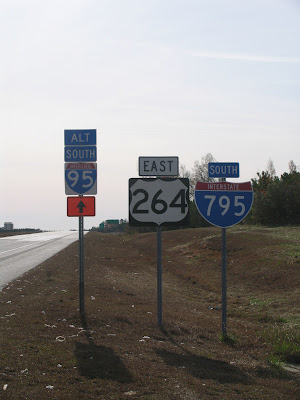 Well yes, it is. The signs were put up on Wednesday, November 28th. Interestingly, all the US 117 sign have been removed from the 795 freeway. At some interchanges, there are still US 117 shields. Obviously the overheads aren't updated to reflect the change. There is one hiccup. Where I-795 splits from US 264 to head south to Goldsboro, it is not marked at all. So if you stay East on US 264 expecting to be on I-795, you'll be like "Hey, where did 795 go?" I am sure this will be fixed once the guides and overheads are updated.

There are also END signs like below at both termini. We didn't notice any 'BEGIN' signs. 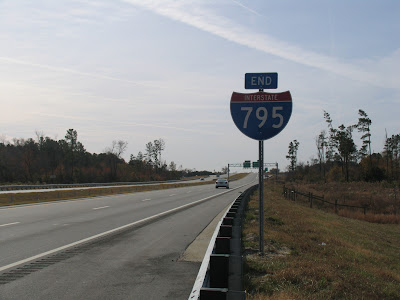 Also, Alternate banners are still up on US 117. However in some cases, the Alternate banners were never added so it won't be that big of a change on what is now once again US 117. The only question, where will 117 end now. Most likely US 301.

NC 711 ends at I-95 while multiplexed with NC 72 for about a quarter of a mile. Also, NC 711 is signed North/South when it clearly goes East/West. Makes no sense. 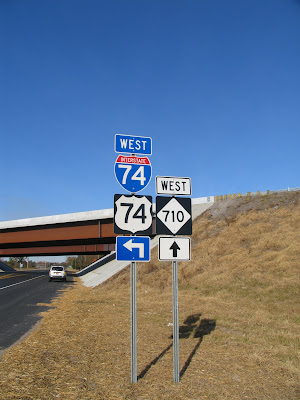 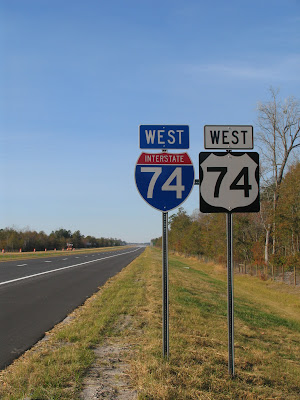 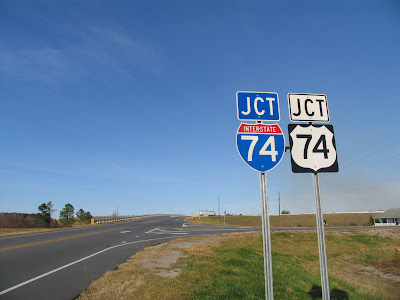 Right now, the new six miles of I-74/US 74 is posted at 55 mile an hour. It is primarily open for 'Local Traffic Only' at this point. We'll see what happens come vacation season though. 74 is a key route from Charlotte to the beaches. 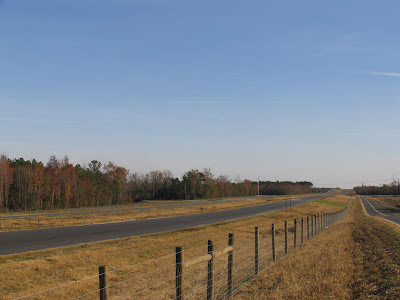 Exits are based on I-74 mileage and the milemarkers have I-74 shields only. Interesting if you are headed eastbound at the end of the former Maxton Bypass. You are forced back on the old two lane US 74. If you want to continue on the six miles of freeway to NC 710. You basically need to take a U-Turn at the end of the on-ramp to get back on the highway.

Speaking of that interchange. You got to love signs like these: 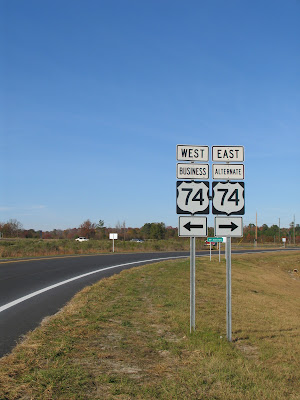 Surprisingly, Interstate 74 shields, milemarkers, and exit numbers continue beyond the newly opened highway to the end of the Laurinburg Bypass. We didn't think that the new signs would have been posted already. Signing plans call for the not quite to exact Interstate standards freeway to be signed as an Interstate. And obviously, they've already been done. I-74 shields are through out the Laurinburg/Maxton bypass and also on surface streets at the interchanges. Most of the exit gore signs read with I-74 exit numbers, as do most of the guides. A few guides need I-74 exit tabs and that's it.

And there is even an 'END' I-74 shield at the eastern end of the freeway. 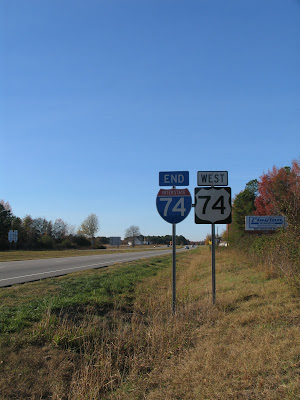 And I-74 shields have been added onto overheads and guide signs at the beginning of the freeway as well. 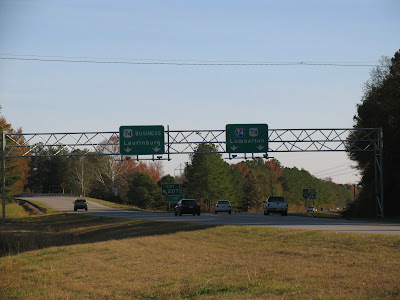 From there, it was on to check out some construction progress on the I-73/74/US 220 Ellerbe Bypass. A couple of surprises are found here.

First, it appears that NC 73 will not be routed on the new freeway. It is most likely going to continue on what is now US 220 (which will become either US 220 Alternate or Business or both). And here's proof of why. 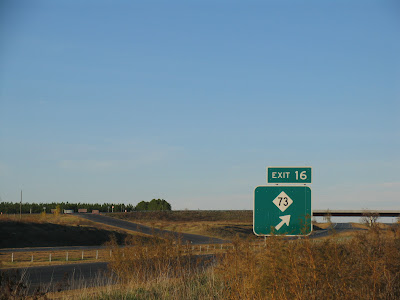 First, the exit numbers are based on US 220 mileage. However, there are a few clues. First, the guide sign only reads NC 73 (without any East/West). Second around the interchange there are new NC 73 shields located west of the interchange, meaning NC 73 would not go on the freeway.

Finally, shown below, there is not an NC 73 West shield on the guide signs used for shields on the new highway. This shot was taken from a distance at max zoom so it is a little bit sketchy. 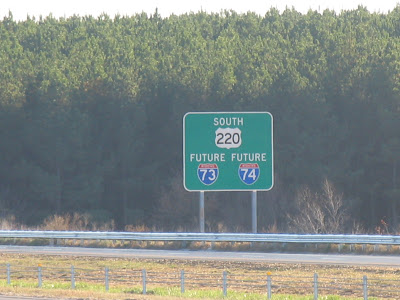 There isn't an NC 73 shield on this guide. But also take note that it reads 'FUTURE' I-73 and 'FUTURE' I-74. This is interesting as most thought the highway would be INTERSTATE 73/74 at this point. The reason is that the freeway to the north that the new highway will connect to is already signed as INTERSTATE 73 INTERSTATE 74. So we'll see what happens.

As a whole, a worthwhile field research trip with a few surprises. It will be interesting to see what happens when the Ellerbe bypass opens if the currently signed I-74/74 to the North changes to Future. Or if Future 73/74 changes. Also, what exactly happens to NC 73. IS my guess that it won't go on the new freeway right? We shall see, the freeway is supposed to open next Spring.

If you made it this far, take some time and read Bob Malme's I-73/74 pages. It gives an accurate and in depth look at the progress of both Interstates in North Carolina.

Anonymous said…
I gotta hand it to NC, they're the last place that actually is still building new highways to keep up with development, unlike other places where suburbs keep going, and 2 lane roads are overcloged and widening is impossible
2:12 AM

Anonymous said…
There is a statement that needs a little clarification (below), you can do that, however, if you take the exit before it which is the 'A' and not the 'B' it will lead up to the Business 74 as well. But you can drive straight across and be on the On Ramp for the other 6 miles.

(You basically need to take a U-Turn at the end of the on-ramp to get back on the highway.)
6:47 PM

Anonymous said…
On another note:
NC wants to route I-74 off US74 through an expensive-to-build-on marshland to Myrtle Beach. Environmentally it will be years to get it passed.
It really should be routed to Wilmington which is better for the state. Wilmington is adding more cargo ports and will need better routes to Charlotte.

Looking at the area, I-73 will already serve Myrtle Beach. This is useless duplication at a horrible expense. But then does anyone at the DOT or politics know what they are doing?

(SC refuses to continue I-20 from Florence to Wilmington due to reducing/losing their beach revenue to NC). So again why should be build an interstate to their beach and not ours?
6:55 PM