By Adam April 28, 2007
Yesterday, NYSDOT announced that they will begin a construction project to replace 8,500 cubic yards of polystyrene fill that was used in an emergency repair of the Interstate near Sidney. The fill was used in a project to replace a collapsed concrete culvert and 175 feet of washed out roadway that occurred last June. The collapse of the highway killed two truck drivers.

The issue this time is that the Styrofoam fill is settling and not holding up to design standards. The fill was used along the embankment and as a layer between the culvert and asphalt roadway. According to NYSDOT officials, there is no issue with the new concrete culvert, but the fill was not holding up well.

The polystyrene fill will be replaced by an "expanded shale" fill. The fill will come from a process that heats shale rock to 1000 degrees. A description by the DOT of the expanded shale is "The layers in the rock expand like popcorn and are baked by the heat, producing a material that is light, stable and strong."

On top of the fill will be three feet of asphalt.

Construction on the $1.1 million project starts Monday and should continue through July. Traffic on I-88 will be limited to one lane in each direction during the fill replacement. I-88 Exit 10 Eastbound will also be temporarily closed during the project. All Eastbound Exit 10 traffic will be detoured to Exit 11.

Story: I-88 section to be rebuilt again ---Albany Times-Union 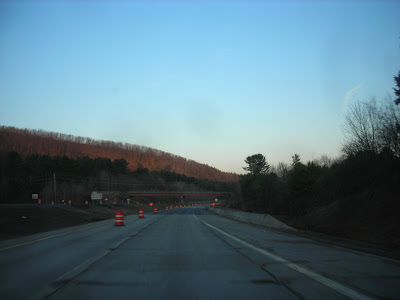 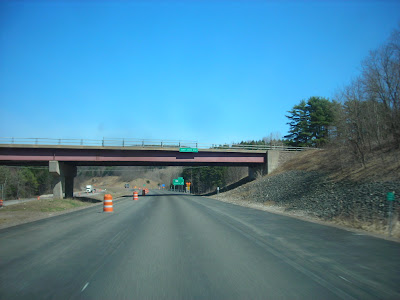 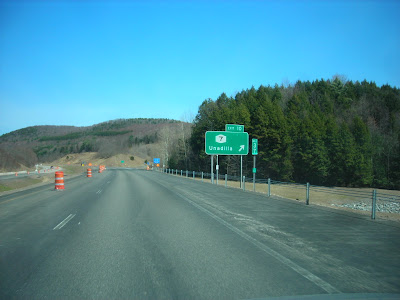 Again Eastbound at the site of the culvert. The NY 7 guide sign is new as the guide sign standing on the day of the collapse fell into Carrs Creek. (April 22, 2007) 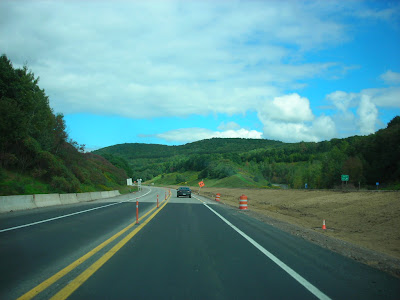 Repairs to the damaged culvert were still underway in September 2006. I-88 was reopened to one lane traffic in each direction two weeks earlier. (September 16, 2006)