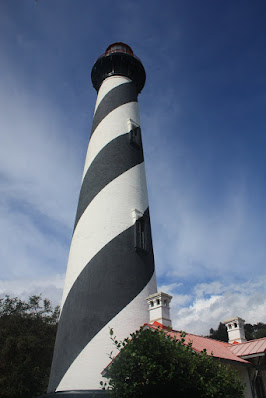 The historic St. Augustine Lighthouse towers above nearby Anastasia Island. The 165 foot structure began operation in 1874.  It is the second lighthouse to occupy the island.  The first, a 73 foot brick tower and built slightly to the east, began operation in 1824.  The original lighthouse was part of the old Coquina Watchtower built by the Spanish in 1683.  When Florida became a United States Territory in 1821, the Territorial Council requested funds to convert the watchtower to a lighthouse.  It opened three years later as Florida's first lighthouse.
Nearly three decades and one Civil War later, the original lighthouse was in danger of falling into the Atlantic.  In 1871, construction began on the current tower which is constructed of brick and sits on a concrete foundation.  By 1880, both the coquina keeper's house and former lighthouse had fallen into the ocean.  The lighthouse served as a lookout in three wars, the Spanish-American, World War I, and World War II. The lighthouse has two sisters: Currituck and Bodie Island.  Both in North Carolina, they are built of the same design, only the paint schemes are different.

Entrance to the lighthouse is $12.95 per adult ($10.95 for seniors and children under 12).  Admission includes a self guided tour of the lightkeeper's home and the opportunity to climb to the top of the lighthouse.  There are also special ghost and sunset tours available at a higher price.
All photos taken by post author - October 19, 2011.
Sources & Links:
How To Get There: