By Bob Malme March 07, 2012
For a class project yesterday (3/6) I had to drive to Brandeis University and interview the staff of the university archives and special collections department. They have a Joseph Heller collection that contains several drafts of Catch 22 (on display in their exhibit space) and also several of his draft scripts for McHale's Navy (not on display). But I digress, I took advantage of the trip to take a look at several new and interesting signs along the '128' corridor between Braintree and Waltham.

Traveling to the end of I-93, they have installed another overhead gantry for a huge sign, this one at the I-95 South on ramp... 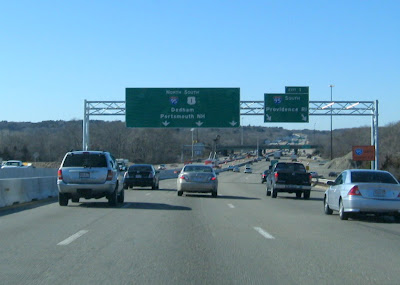 The left-hand sign still awaits an additional 4th arrow when the new lane opens up, hopefully later this year. You may also have noticed the gap to the right of the 1 on the exit tab. This is like the previous signs I have posted for this exit, like the one installed near Exit 3 in the Fall of 2010:

I thought this space was so that both 'ramps' to I-95, like at MA 3 when it meets I-93 in Braintree, could be labeled. The reason given by MassDOT was to make them easier to identify for those reporting accidents. But, as you can see in the top photo, there's no tab on the left hand sign for I-95 North/US 1 South. Why the space then? Did they forget to put the left-hand tab on, are waiting for the final arrow to go up, or is this one of the ways MassDOT is preparing for when they have to adopt mile-post based exit numbering? The I-95 exit is at Mile 0, the MA 138 exit is at Mile 1, thus both should get a 1 number in a mile-based system. Is this exit tab set up preparing for the day this exit will be 1A and MA 138 will be 1B and 1C?

On the way back I took some photos along MA 30 which I exited at off of I-95/MA 128 to reach Brandeis. I thought this assembly was quite unique: 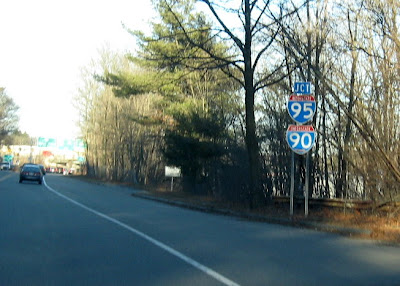 The only instance I know of an I-95/I-90 'implied multiplex' on a ground-based sign. There are several similar I-90/I-93 ones in downtown Boston. The overhead signs at the actual interchange are a cornucopia of route numbers too: 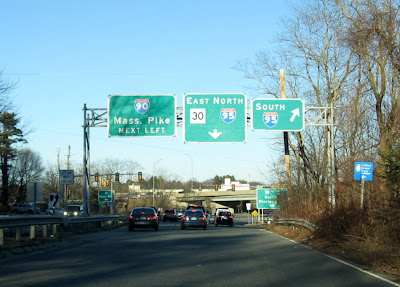 This happened to be the day the contract for replacing the signage along this stretch of I-95 was closed for bids. Maybe there will be newer signs here the next time I visit. Notice the lack of auxiliary MA 128 signs that you see at other interchanges. Maybe they thought it was one sign too many.

Heading back onto I-95 South, they are making progress in building the new bridges for the widening project between Exits 18 and 17. Nothing seems to have started on the final stretch north of there to MA 9, Exit 20. More action near the I-95/I-93 interchange in Canton. Another new sign on I-93/US 1 Northbound for MA 24 (similar to that at 1 mile): 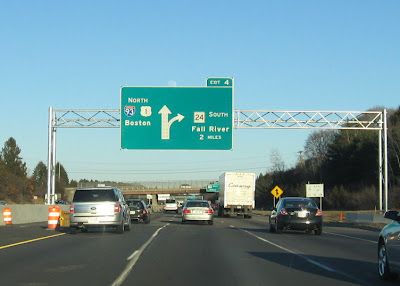 I didn't notice it at the time, but the moon has a guest appearance at the top of the sign, just follow the arrow. The moon also makes an appearance below, this was put up last year, but this was my first decent photo of it: 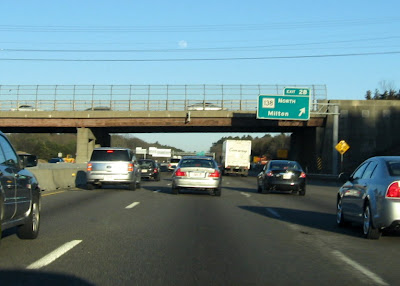 Work remains to be done on the bridge and along the median around it. It appears the winter construction stoppage period is over a little early this year. Hopefully, progress will be made so that the new lane between MA 24 and US 1 in Dedham can be opened by the summer and the rest of the new signage installed. If it happens before June (more on that later) I'll post a report.