By Adam January 12, 2011
Over the Christmas Holiday, Maggie and I had a chance to tour James Madison's Montpelier.  Montpelier is located on VA 20 just south of Orange, VA.  Like Jefferson's Monticello outside of Charlottesville, Montpelier is open to the public and offers various tours and activities.  Admission is $16 for adults and $8 for children. 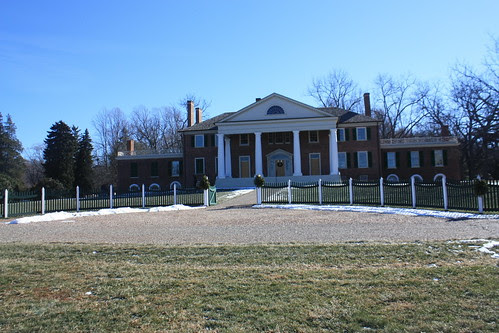 Montpelier has a unique history of its own, something that the both of us grew to learn and appreciate from our touring the estate.  The grounds that is the birth place of James Madison has a colorful and unique history.  Montpelier's history dates to the 1720's when Madison's grandfather moved them to 'Mount Pleasant'.  Mount Pleasant would evolve into Montpelier upon the construction of a two story brick home in the mid-1760's by Madison's father.  Madison himself would oversee the construction of two additions to the home (in 1797-1800 and 1809-1812). 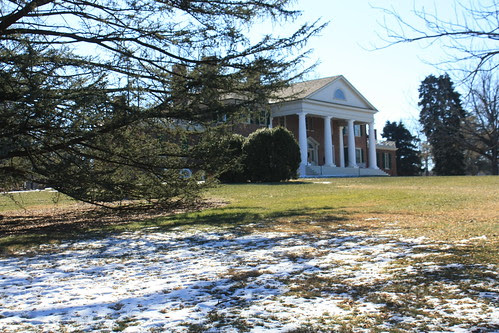 Madison would remain at Montpelier until his death in 1836.  His widow, Dolley, would sell the home in 1844.  The remainder of the 19th century would see seven owners of the estate until the duPont family purchased the grounds in 1901.  Montpelier would remain property of the duPont's until the passing of Marion duPont Scott in 1983.  Following her wishes, Scott's heirs transferred Montpelier to the National Trust for Historic Preservation in 1984.

Montpelier was first opened to the public in 1987.  However, the home had seen numerous changes and additions built by the duPont's.  It wasn't until 2003 that renovations began to return the home to its 1836 design.  The deconstruction of the additions and restoration of the home lasted until 2008.  Since then, an ongoing restoration of the interior to Madison's era has begun.  This never ending sleuth and scavenger hunt has led to numerous discoveries about the interior of the home, location of various roads, fence posts, and other items on the grounds, and also the location of various slave quarters. 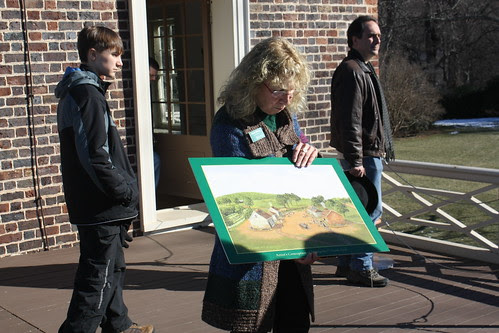 When you visit Montpelier, there is plenty to see and do.  First, at the visitor's center, there is a brief movie about Madison and Montpelier to view prior to touring the home. The tour of the home discusses how archeologists and other researchers are looking for and have found clues about the interior of the home that has led them to slowly piece together a furnished interior of the house.  The tour also includes an opportunity to take in the fabulous view of the Blue Ridge Mountains to the west. 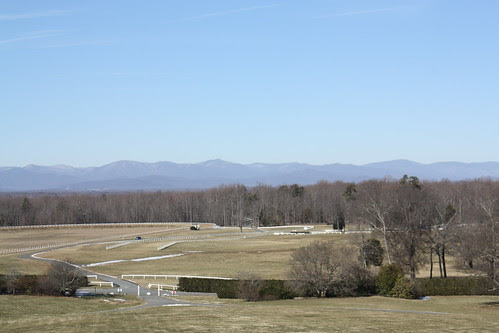 On the second floor of the home, there is a more interactive and detailed story of the restoration process in what they call a "Presidential Detective Story".  The cellar is also open for a self-guided look.  The archeological laboratory is open to the public as well as active open-air digs - weather permitting.  The Madison and duPont gardens are also open to the public, in addition to numerous walking trails.  Within the visitor's center, there are two galleries - the Grills, which features the found treasures of Montpelier - and the duPont which features numerous artifacts and heirlooms of the duPont family. 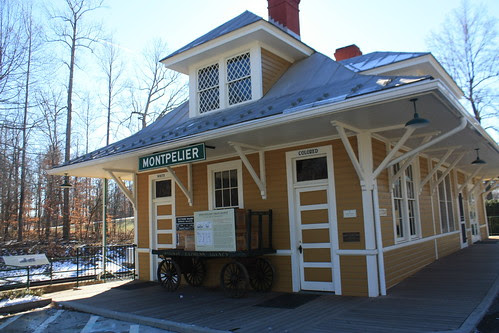 If you have the time, a must-see is located just off the grounds of Montpelier.  A total restoration of Montpelier Junction Train Depot - a former Southern Railway station - is a fascinating look at America during the time of segregation.  The depot has been restored to how it appeared when it opened in 1910 - complete with segregated waiting rooms, "white" and "colored".  Within each waiting room, modern visitors can see the difference of accommodations during the time of "separate but equal". 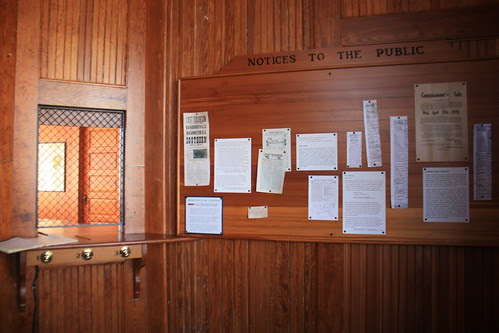 It is a powerful reminder of how much African-Americans had to overcome, and the powerful realization that it wasn't that long ago that segregation was an unfortunate part of our lives. 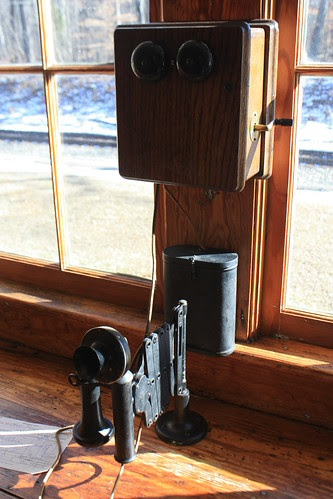 The old freight room is home to the local post office but part of it has been open for the self-guided tour.  Inside are numerous technological items from the early 20th century.  Telegraph, telephone, and typewriters from the era have been restored and are included in the exhibit.

James Madison's Montpelier is an excellent stop for learning and being a part of history.  Interactive tours and activities for all ages can make a memorable visit to this scenic and historic part of Central Virginia.

My entire photo set from Madison's Montpelier can be found on flickr.

DennyG said…
I was not aware that Montpelier had been restored. If I had been, I might have tried to work it in with my first ever visit to Monticello. It's definitely on my "to see" list now and you can be sure I'll check out that railroad station, too. Thanks for the report.
6:35 AM

Anonymous said…
I was searching for a Nevada City public art image and happened upon your blog. Wonderful! You should share some of your pics with a great Facebook entity: Vintage Roadside. They would get a kick out of your travels.

Holladay House said…
Montpelier is a fantastic property. In addition to everything else you mentioned, there is also the Gilmore Cabin across from the main property. In conjunction with the Train Station, this cabin rounds out the African American experience. It was built by a former enslaved African from the Madison plantation. It is one of the few rare examples of an authentic freedman's home. Ironically, Gilmore built the cabin using materials he acquired from an abandoned Confederate army encampment that was a few hundred yards away. This encampment is currently being reconstructed as another site on the Montpelier property, and Montpelier regularly hosts re-enactment events there. Both Montpelier and the nearby Town of Orange have some incredibly important history, and the region is gorgeous. Definitely worth a visit!
1:59 PM