Is Virginia considering to extend I-785 further North? 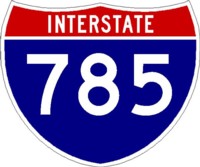 Though it's not even a signed route, Interstate 785 may be extended further north within Virginia.  The 'Future' Interstate, which is to run from I-85 east of Greensboro, NC then follow US 29 to Danville, Virginia, was first came into existence in 1997 when AASHTO approved the designation.  In 1998, Congress passed a bill authorizing the designation.  Later that same year, a "public announcement" was held trumpeting the new Interstate.

Fast forward another 13 years to the present, and the Virginia State Assemblyman, Daniel W. Marshall, III (R), proposed a resolution (HB 2481) to extend Interstate 785 northwards along US 29 to Altavista.

The summary of the bill is as follows:

Designating a portion of U.S. Route 29 as Interstate 785.  Designates U.S. Route 29 from the Virginia-North Carolina line to north of the Town of Altavista as Interstate 785. The bill provides that such designation shall not take effect until the Virginia Department of Transportation consults with the Federal Highway Administration to identify any steps that need to be taken along the designated route to meet federal interstate standards, and VDOT shall report to the Joint Commission on Transportation Accountability the steps that need to be taken for such designation by December 1, 2011.

The bill is currently in the Virgina House Transportation Sub-committee.

For Interstate 785 to even exist to Altavista, the non-access controlled segments of US 29 between the Danville and Chatham bypasses, the Chatham and Gretna bypasses, and the Gretna and Hurt/Altavista bypasses would have to be upgraded.  That is about 22 miles of roadway.

In addition, upgrades to the Chatham (1965), Gretna (1975), and Hurt/Altavsta (1974) would be necessary.  These would be just the key points the FHWA would suggest to VDOT for any Interstate designation to take place.

Furthermore, Altavista doesn't seem to make sense as the northern terminus for the Interstate.  Lynchburg, a much larger city, is located approximately 18 miles further north on US 29.  Virginia has plans to build the South Lynchburg Bypass from where US 29 (Madison Heights Bypass) meets US 460 southeast of Lynchburg to near where current US 29 meets VA 24 today.  The City of Lynchburg is currently not served by an Interstate; and if Interstates mean "economic development" then the route should ultimately reach Lynchburg.   Which, personally, I believe is the ultimate goal for I-785.

Will Weaver said…
You're right, Altavista is a rather bizarre choice for the northern terminus of the route. The route should probably terminate at the northern end of the Amherst-Madison Heights-Lynchburg bypass, although parts of that route are certainly not up to interstate standards. The Lynchburg Expressway most definitely isn't.
7:41 PM

Anonymous said…
i still think that the whole US 29 corridor should get a new number or an extension of an existing number. I think 73 should be extended up from greensboro to Atleast 64 if not 66 along US 29. this would open up a new route through virginia. Or even more crazy have it follow US 15 all the way to Harrisburg, PA!!!
1:12 AM

Anonymous said…
Back in the 90s, VDOT did a study on the US 29 corridor that recommended making the whole section between the NC state line and the north end of Amherst County (roughly around where VA 151 branches off) a freeway, with the remaining stretches north of there improved as some type of arterial/parkway. As I recall, that plan called for completion of the South Lynchburg bypass (using either the east or west alignment option), upgrades to Chatham, Gretna, Altavista, and Amherst's bypasses, freeway upgrades of the existing 29 alignment between Chatham and Gretna and between Gretna and Altavista, and new alignment between Blairs and Chatham and between Altavista and Yellow Branch. But that was back in the 90s, when VDOT was flush with money (or at least thought it was flush). Nowadays, I doubt any of this would actually happen. If we're lucky and the planets align just right, they might build the South Lynchburg Bypass, but the rest is probably wishful thinking. Anything further north than Amherst is pretty much out of the question (Charlottesville would never go for it).
4:11 PM

Unknown said…
Why not bring 73 up from greensboroto Lynchburg the west towards Roanoke.
5:24 PM