By Bob Malme July 19, 2009
I spent the last couple weeks in Massachusetts where I documented the progress on several sign related projects.

First, the Route 3 (Pilgrims Highway) Re-signing Project. Basically only a few changes since I was there last January. First they have placed new signs for Exit 16, Route 18 northbound. These can't really be called sign replacements, since no signs have been here since at least the 1980s: 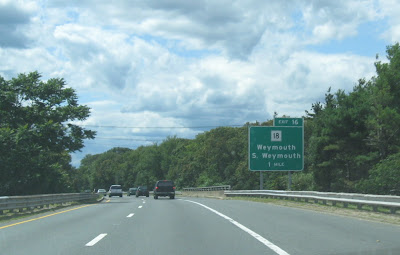 Here's the first sign, there is only 1 exit northbound, compared to two southbound. 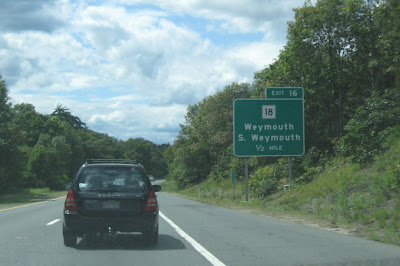 This is the last ground-mounted sign northbound (to allow for future expansion of the roadway to 3 lanes). You can also see a mile-marker to the left of the sign. This was not a part of the current mile marker project (see below), but was put up a couple years ago on highways in this MassHighway Division (the .0 mile markers don't have route shields, or direction).

The only other new sign I noticed was the 1 mile sign for Exit 20, completing the new signage on MA 3 north for this exit (signage for the off ramps that hadn't been changed at the end of last year, still has not been replaced): 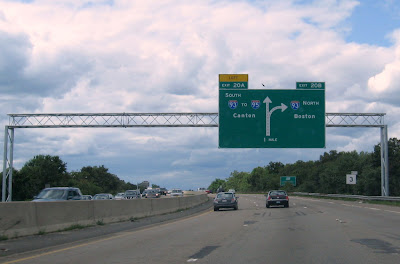 This is identical to the other signs, there had been suggestions a US 1 shield would be added. The original signs are still present, posted to the bridge over the hill. Why all the empty space at the bottom? Couldn't other control cities be added? Notice the large MA 3 shield, the directional banner is on the wrong side based on its placement on signs elsewhere.

The I-93 Sign Replacement Project. This supposedly started in February but has little to show for it, maybe a new ground mounted sign or two and the removal of some old route signs, especially going northbound, but no replacements for them. Maybe they are waiting for other projects going on along the SE Expressway to wrap up, the current one involves working of bridges at night between Exits 15 and the Braintree split at Exit 7.

The "128" Add-A-Lane Project. Bridge work has been completed at the southern end and lanes expanded to their final dimensions around Exits 13 and 12 going southbound. This has allowed for the installation of new signs. First a sample of signs previously in the area from those at Exit 14, East Street in Canton. 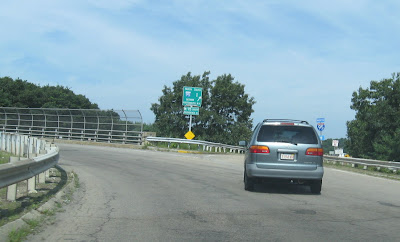 This sign was posted before MassHighway started putting up US and state route shields on signs, this is for the ramp going north (I-95) and south (US 1), notice not mention of Route 128 here at all, though signs indicate it begins at Exit 12. Similar signage going the other direction: 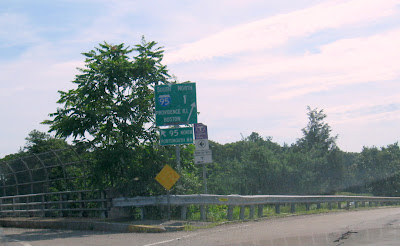 Only in Massachusetts can you be directed onto a highway going both to Boston and Providence at the same time. Again no 128 trailblazers. 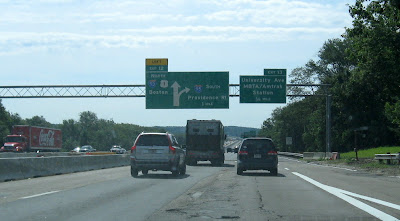 The sun is behind the signs, so the quality of this and the next few images are not as good. Notice that Braintree which appeared on the previous sign at this location under I-93/US 1 is gone. 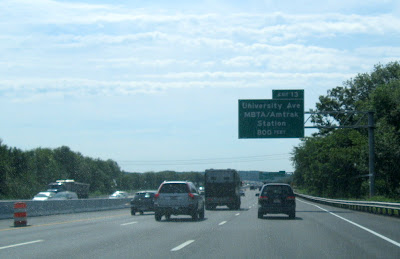 This is one of the few signs in MA I've seen to have its distance labeled in feet, not miles. 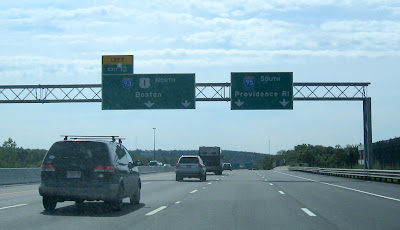 Within 1/2 mile of Exit 12 the diagrammatic signs disappear in favor of separate signs for I-93/US 1 and I-95. Notice the two lanes indicated for I-95. 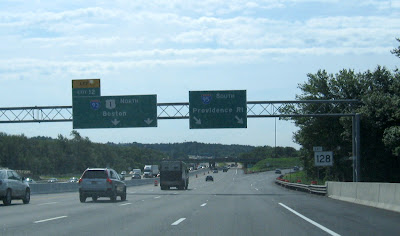 That is because, as you see, they made the breakdown lane into a travel lane temporarily. This whole interchange will be overhauled in a separate project in a few years. Notice the new End MA 128 sign, the former one(s) were located on both sides after the exit ramp.

The New Mile Marker Program. As has been posted in misc.transport.road, MassHighway has started a project of putting in new mile marker posts every .2 miles on all interstates and major expressways in the state. The project is to be completed by the fall. Others have posted these new mile markers have appeared on I-91 and I-291 in the Springfield area and along I-195 and I-495. I saw the new mile markers on I-295 and I-95 north, from at least I-295, to just north of Exit 11. I also saw a few sporadic ones north of Boston on I-93, the last being for mile 19 at Exit 28 for Sullivan Square (at night, no photo). This is what a marker looks like at .0 miles: 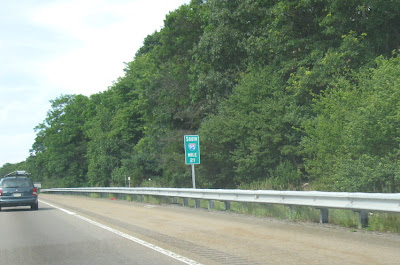 This being I-95 Mile 21.0 the marker is accompanied by the route shield and direction. All others at .2 mile intervals in-between are like the Route 3 marker above just listing the distance. 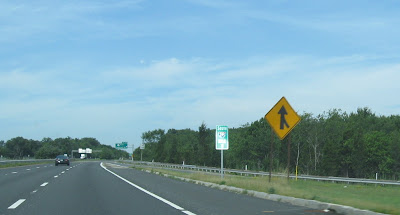 New signs on I-295. While this project wasn't completed recently, this is the first time I got to take some photos: 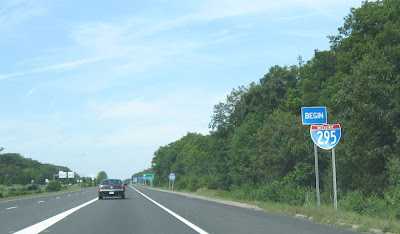 I assume they were going to put even a bigger I-295 shield here, thus the Begin at the left corner, instead of above the sign, where it would fit. 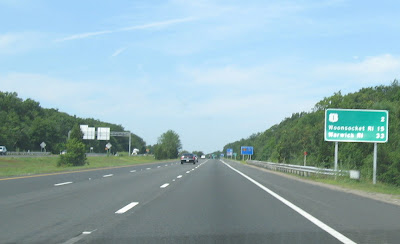 This photo shows another recent MassHighway trend, the adding of distance signage, not all of which are still correct a couple years after being put up. 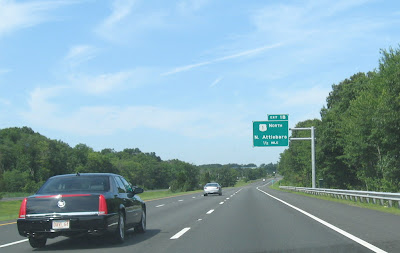 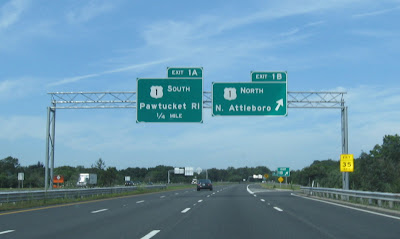 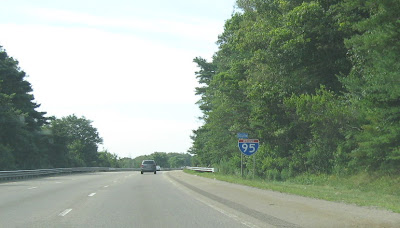 For those wondering about all the posts about the 'huge shields' MassHighway is putting up, here's an example of one of the first, along I-95, this one in Foxboro (some of the North I-95, south facing, shields, have begun to fade already from the sun, possibly explaining how such huge signs could be bought in the first place). Notice the direction banner is in the right place, on the left side, as opposed to the Route 3 shield above. 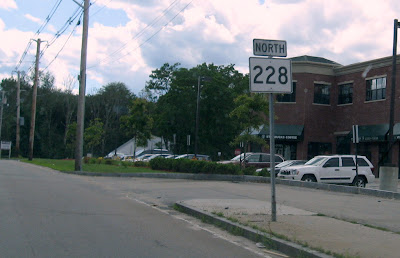 A North Route 228 sign on Derby Street in the hometown of Hingham. This is still here despite signage put up last year by Mass Highway that unambiguously indicated 228 runs north and south from and to MA 3 Exit 14 in Rockland. Derby Street goes to Exit 15. Given in Massachusetts that usually the most outdated signage lasts the longest, this will probably still be here for a long time. Indeed, in the latest MassHighway projects list there is a project to widen parts of Derby Street due to increased traffic.The project is listed as taking place on 'Derby St. (Route 228)'. Hello? This is the historical route of MA 128, behind the camera was where the southern end of the Boston cirumferential highway ended, then at MA 3 (now MA 53).

I will post these and additional photos on my Mass. Highway photo page in the near future.