By Bob Malme July 26, 2009
I drove around Greensboro today (7/26) to take photos of the signs along I-40 and the Loop that have been updated since my last visit a month ago. The good news is that most, but not all, have been revised to reflect the new route number alignments. First of all, they've removed the Business I-85 and Business I-40 mile markers along the original I-40 and put back I-40 mileposts, such as this: 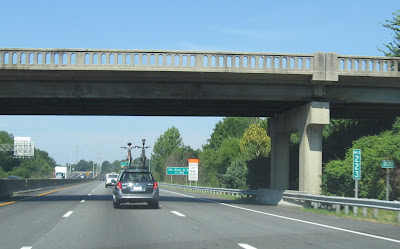 Also all the US 421 signage west of the Business 85 split has been removed from the roadside, though one still exists in an overhead sign: 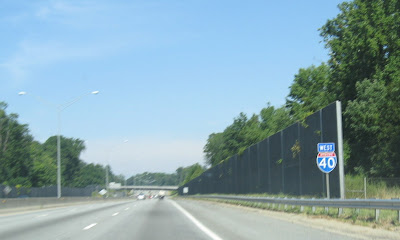 They have also revised the exit numbers going west on I-40 for the Loop exits: 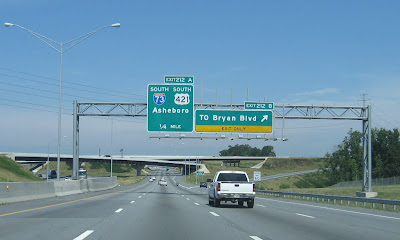 The Loop south sign has also been revised to drop the I-40 designation, though no effort has been made to include I-73 in the northbound Loop exit for now. Here's the southbound loop signage at the ramp: 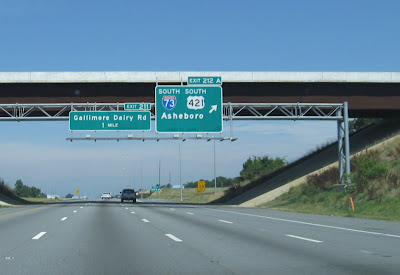 There is room for a second control city, Asheboro is listed in signs at the I-85 interchange, why not here? The sign changes going east on I-40 approaching the Loop are more dramatic: 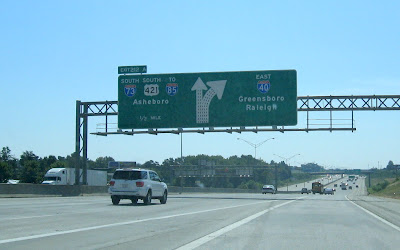 Traffic to Raleigh is directed along I-40. Since the exit mentions I-85, maybe the addition of High Point or Charlotte could be added here. The signs at the split look like this now: 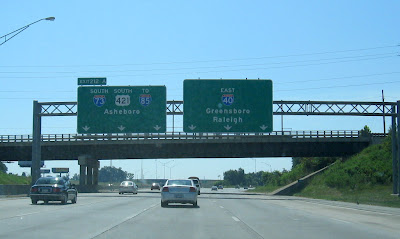 Following I-73 South, all the exit numbers for Wendover Avenue now read correctly: 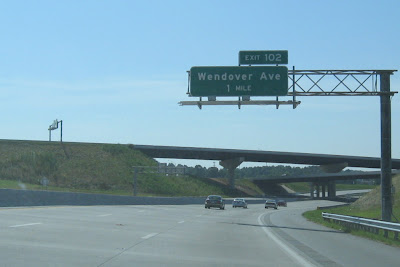 Though they still haven't changed the overhead 1/2 mile before the exit: 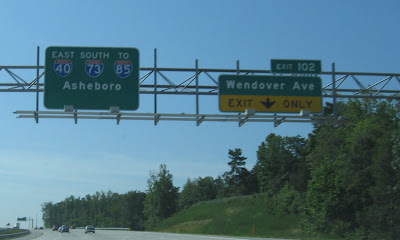 The ground mounted route signage has changed, however: 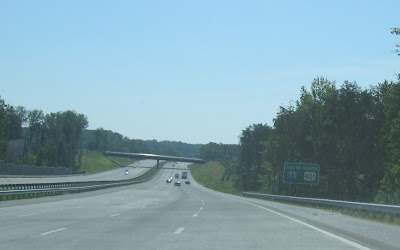 The only addition to signage on the rest of the Loop is an End(!) I-73 South sign at the ramp to US 220 (I did not notice any Begin I-73 North signage going the other way): 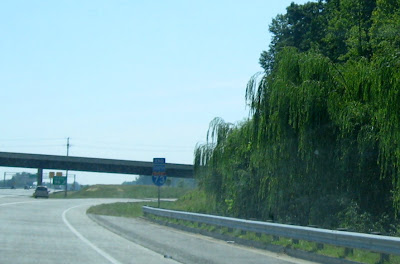 Signage along US 220 North, Future I-73 has been changed too. Here are how the two exits at the Loop are now signed: 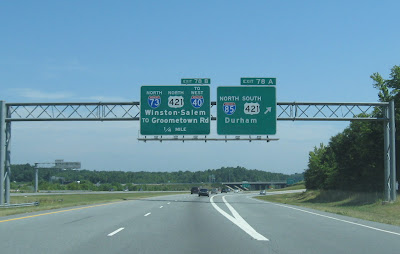 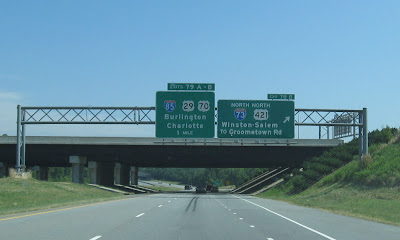 Though the I-85 for Exit 79 is technically wrong, NCDOT apparently thinks it's important to keep for people looking to access I-85 south. (They could help by putting a south over the I-85 shield). The signage along Business 85 south has also been updated to reflect the I-40 re-routing: 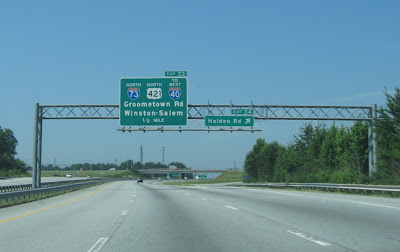 There still are some unfinished projects remaining. All the shield signs along the I-85 section of the Loop still read I-40/85, and the shield signs on I-40 east of US 29 still say Business 40/85. There is the sign at Wendover as indicated above along with the remaining exit number switch for the exit after the Loop on I-40 east, they still list the the Business 85 and former I-85 exit numbers. Hopefully these will all be done by the end of July, as promised by NCDOT.

Anonymous said…
im confused.....what are the former and present routings of US 421 and US 220? how has that changed as they have commissioned and decommissioned I-40 along the loop?

Bob Malme said…
The US 220 routing hasn't changed, for a long while. I was speaking of the route of I-73 along it. Originally I-73 was to travel all the way north on US 220 to I-40 then take I-40 west to NC 68. NCDOT, for cost and other considerations, decided to place I-73 on the Greensboro Loop to Bryan Blvd then west to NC 68.

As for US 421, up until a month ago it ran north through the Loop and up to what was then Business 40/85 then traveled along with Business 40 west then joined I-40 after it left the Loop. The new route (some still existing signs notwithstanding) place 421 North onto the Loop at I-85 Exit 126 and route it west with I-85, then north with I-73 back to I-40 where it meets the Loop west of Greensboro. The old 126B exit for US 421 North now reads just Greensboro.

As for why NCDOT chose the I-840 designation to only run on the northern section of the Loop, with originally I-40 and I-85, and later I-73 to run on the southern portion, the adding of an additional interstate was not deemed necessary. The stated goal of the Loop at that time was to remove non-Greensboro traffic from the old I-40 Death Valley alignment, an additional I-840 designation doesn't add anything for this purpose. If, from the beginning the NCDOT decided I-40 should stay on its old route, and that I-73 would not use the Loop, then maybe having I-840 on the entire Loop, like I-495 in DC, may have made more sense. It makes it easier just to have 840 as an east/west route north of Greensboro, maybe that will change once the entire Loop is completed.
2:13 PM

Anonymous said…
Bob, do you have any idea why NCDOT hasn't gone ahead and signed I-73 north of I-40? You had said in a previous post that they hadn't changed the signs for that stretch of road (from I-40 to Bryan Blvd) yet. That gave me hope, as I think it's just stupid to name a large interstate-type road "TO Bryan Blvd" for the next 20 years until the loop is done. Why not just make it I-73 right now? Do you have any insight? They recently put a ground sign about 20 feet after I-73 meets I-40 that says "End I-73 North". Just makes me scratch my head. Love the blog, by the way!
9:32 AM

Anonymous said…
From talking with the DOT engineer in charge of the resigning, He said that I-73 would not be signed North of I-40 until the NC-68/US-220 connector is constructed to provide a lengthy segment of I-73 to decrease the confusion to motorists. This connection will also provide a reroute of US-220. As far as I-73 South of the Outer Loop towards Asheboro, He informed that NCDOT was talking with the FHWA in regards to waivers and modifications to the existing US-220 to sign it as I-73 to provide a connection to the existing signed stretch.
12:30 PM

S Summers said…
That would be interesting to have 2stretches of Interstate meet at a skew North of Asheboro. At least the signage would be more consistent at the I-73 and I-85 Jct South of Greensboro. Also, could you get a photo of the End I-73 NB at I-40?

Bob Malme said…
Your wish, is my command, thanks to the editor of the Urban Planet Triad forum, who sent me an end North I-73 sign photo, plus other I-73 North photos at Exit 103 (I-40) this afternoon. They are on the I-73 Segment 5 page after the Wendover Ave photos:
http://www.duke.edu/~rmalme/i73seg5.html
5:01 PM