By Bob Malme December 05, 2008
As promised, I'm posting some of the photos I have taken along the I-74/US 311 freeway now being constructed from Business 85 (US 29/70) to US 220 (Future I-73). The project is actually building two separate freeways. The first covers completing the High Point East Belt Freeway from Business 85 to just beyond I-85 and the other is the US 311 Bypass Freeway which runs from I-85 to US 220 and which is also broken into 2 parts. The second and final part of the Bypass was only recently started as a design/build project. The projected completion dates for the projects seen in the photos below is Spring 2011 while Fall 2012 is the completion date for the part just recently awarded for construction.

The photos and commentary will cover the I-74 construction zone going west to east. 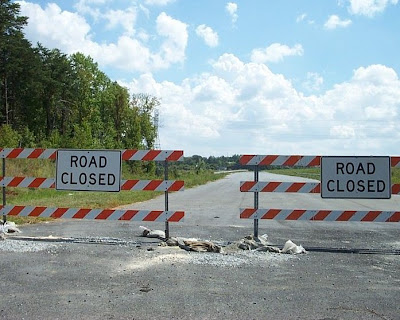 The completed second section of the High Point East Belt actually runs beyond Business 85 to Baker Road so the interchange with the future I-74 freeway is largely complete. The above photo was taken at the future off-ramp from I-74 west in September 2007, and the scene looked similar last month.

2. Baker Road
Nothing is going on here at the moment, and I couldn't find a reasonable place to take a photo. Looking west one sees the completed freeway running to Business 85. On the other side is graded roadbed heading east. Presumably a bridge will be built here. They are probably waiting to start until other bridges (discussed below) are complete and a reasonable detour route can be put together. 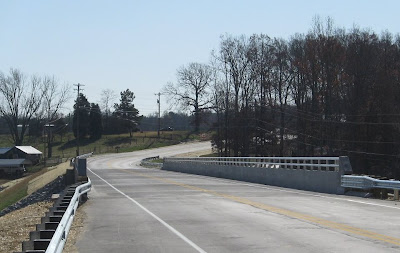 This bridge was completed and opened on Friday, November 21. The view is looking south where Jackson Lake Road eventually intersects NC 610. The roadbed heading back west toward Baker Road is only partially complete: 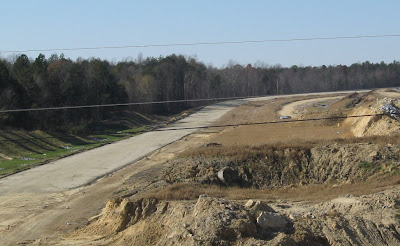 4. Kersey Valley Road Bridge
This bridge was finished in October. The construction of this bridge was complicated in that it continues a curve in the roadway: 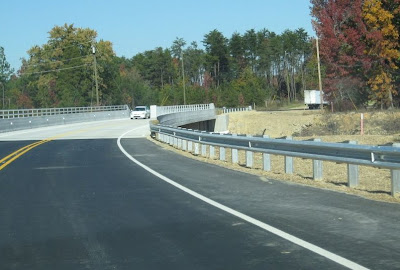 Though there's been more excavation here, but still much more is needed: 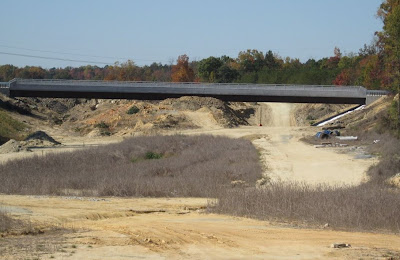 The view to the east shows more excavation and the start of work at cutting off the road crossing the freeway roadbed in the distance. Beyond the hill is the interchange with Interstate 85: 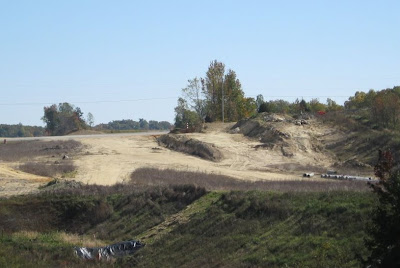 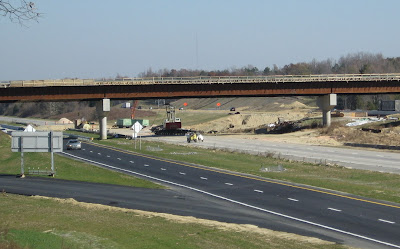 The above photo was taken on November 23, compare the progress to the one below taken on Halloween: 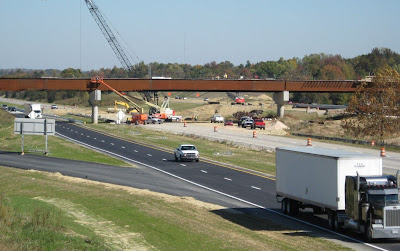 Hard to tell but there appears to be some excavation progress for the I-74 roadbed being excavated through the I-85 roadway. There is also signs of progress on the bridge in the foreground which will be part of the I-74 interchange ramp system. You can also see that as part of building the C/D lanes they've paved the exit ramps to I-85 South as well. The NC 62 exit going south on I-85 will be reached via the C/D ramps: 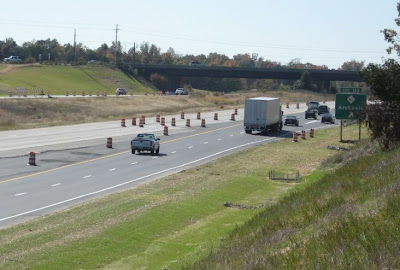 The exit will be renumbered 113A with B and C for the I-74 East and West ramps, respectively. Here's a view of the eastern end of the bridge over the C/D ramps being used for I-85 North: 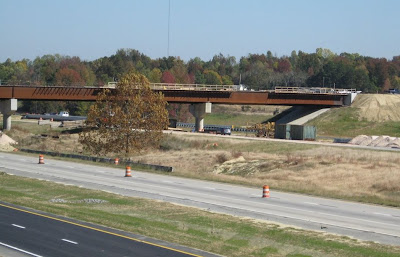 And here's what it looks like traveling on the temporary I-85 northbound lanes under the ramp bridge being constructed: 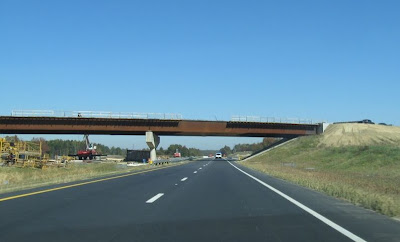 6. View of Roadbed from Checker Road
Checker Road is the first left on NC 62 headed east after I-85. The route has been cutoff and there is nothing in NCDOT documentation listing a temporary detour. A bridge piling can be seen at the end of the road that was built early on during construction: 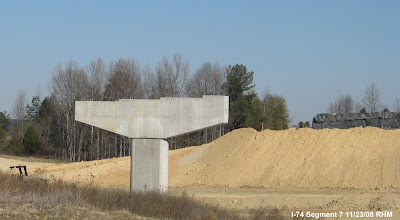 The only change in the past year is the buildup of material on the opposite side of the I-74 roadbed, is this going to be part of the I-74 interchange, or a connection to the road on the other side?
Looking from a more western vantage point you can also see the have paved the ramp from I-85 north to the future I-74 freeway: 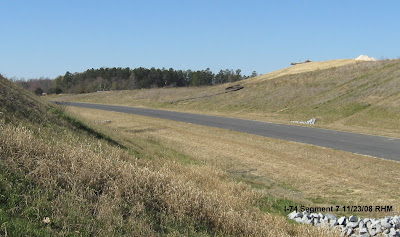 7. NC 62 Bridge
The next bridge needed to be constructed will carry NC 62 over the new freeway. Here's how it appeared on Halloween: 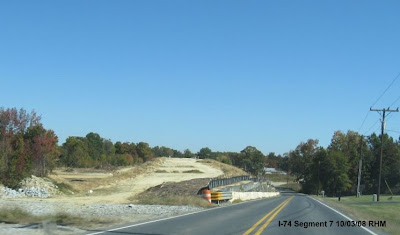 The current roadway will be rerouted, the question is will traffic have to be detoured at any time or will they work around the highway while completing the bridge. The support structures and beams are in place. Across NC 62 from the bridge looking east the contractor had started paving the roadbed in November: 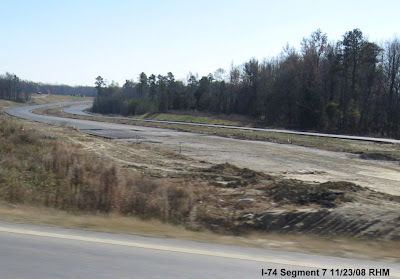 The pavement goes as far as the next bridge being built, that for Tuttle Road which is around the corner, but of which I have no photos at the moment.

8. Poole Road Bridge
The future freeway roadbed runs from Tuttle Road further southeast to a couple miles past Cedar Square Road. Construction in this area includes building a new bridge to reconnect Poole Road over the future freeway. Here's a look at what's been constructed as of November: 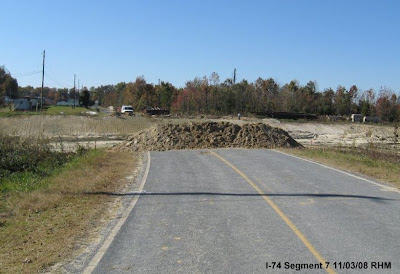 Excavation had been completed but workers were only starting to pile drive piers for the bridge. Taking Poole Road back toward Cedar Square is on a new roadway built to the westbound side of the future freeway roadbed: 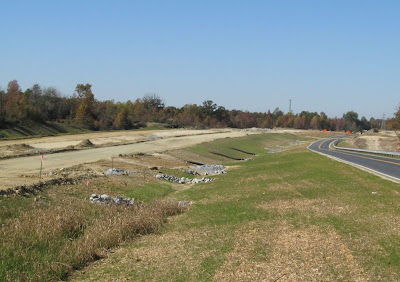 The view is looking westbound, Poole Road on the right. The freeway roadbed is pretty complete in this area. 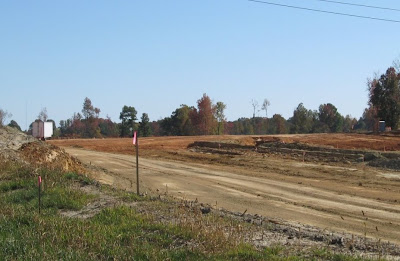 As noted before the roadbed runs about 2 miles further south to just before Spencer Road. The new design-build contract is to pick up the work from there and build the road to US 220. There was, however, no construction progress seen in this area including where the new freeway is to cross the existing US 311 roadway. I expect this is because most of the design work is still going on and will continue during the winter with progress seen in at least clearing the future roadbed by spring. I will continue to chronicle progress on this freeway in further posts.

For some more photos of the construction in the areas listed above go to my I-74 Segment 6 or Segment 7 web pages. Lastly, I would like to thank Bill Travers for updating me on construction progress on I-74 (and US 311) and helping me find the best places to take photos.

Anonymous said…
I'm not sure what type of curing is being used, but it is the quality and beauty of mechanical grooving. Hats off to the Engineers.
6:18 AM