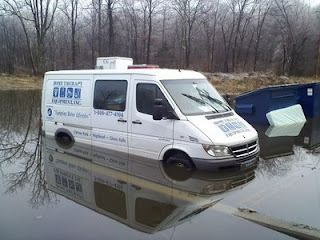 Here you see my krautmobile(AKA My Work Van) doing a rather poor imitation of a submarine. Up in my part of the world we got sort of an ice storm last night. Actually it was mostly rain with some ice-as it stayed above freezing most of the night.

Thinking we'd get ice, I decided to take my car home rather than the krautmobile(Yes, I know it has Dodge badges all over it, but it's really a Mercedes van), since the 88-88 is a better vehicle in wintry weather, despite it's lack of ABS, traction control and all that. I figured, even if I did get stuck; better it should be my car and not the work van. Yeah, right. What you're looking at is the view from the rear door of our warehouse. There's a ground drain to the left of the rear bumper, obviously nonfunctional. And for all intents and purposes, so was the van for the majority of the day. After the water receded, it was driveable; though the rear of the cargo compartment got quite wet.

Things were pretty much a mess: the building lost power at about 5.10pm on Thursday; and power stayed off at least until I left on my last run at 6.00pm tonight. We had no phones or anything until like 4-we were running the office on mobiles. No heat, either. I left my warehouse guy sitting and freezing in the warehouse waiting on a large oxygen tank delivery. There was some consolation for him: I passed the oxygen truck on the way out.

There were a lot of trees down; and the power lines just north of us took a nasty hit: there was a line along US 9W that had most of the line broken. Central Hudson was working on it most of the day, and still had a long way to go. On the Thruway in Orange County, there were a lot of tree company trucks heading north-I saw like 5 groups of 4 within a few miles. Then there was the flooding. Nothing on the interstates, but there was a lot on other roads. On Grand Street going north from Vineyard to US 9W; I ran into a patch that was nearly water covered.

Oddly, in all this, I fared pretty well. I lost power momentarily, but that wasn't storm related-the guys fixing up the downstairs apartment were putzing around with the electrics. I was amazed that they were there at all, given the weather conditions. It was literally bucketing down rain throughout the night.