By Adam October 08, 2008
This is my vacation week, and this year it's staying here in North Carolina but with plenty of side trips out and about.

Sunday, Kristy and I went to Hanging Rock State Park. And I'll post those photos later..for now head to flickr.

Tuesday, I headed into Southwestern Virginia...I have never really had the chance to explore it, so why not!

The entire flickr set (58 photos in all) is here.


The new guide signs are up on I-77 North as you approach I-81. The signs are in Clearview. Now, there are quite a few in the hobby that despise this font. I really don't see the big deal about it, and when I take my glasses off. I can read the Clearview better than the Highway Gothic Font. 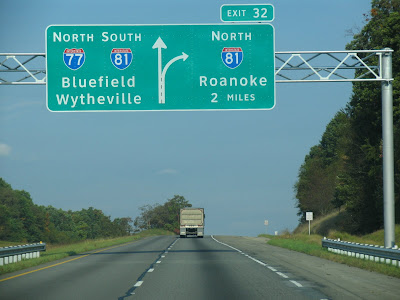 It also appears that Virginia is doing a sign rehab along the I-77/81 multiplex. At a few interchanges, construction crews were preparing for the installation of new signs.

Speaking of which, on a sad note, the US 11/52 cutouts along the southbound I-77 service road have been replaced by an I-77 and I-81 shield.

I really liked the two lane portion of US 58/421 from Bristol to Lake City. A great scenic drive, and not that much traffic either. Here are a couple of views. 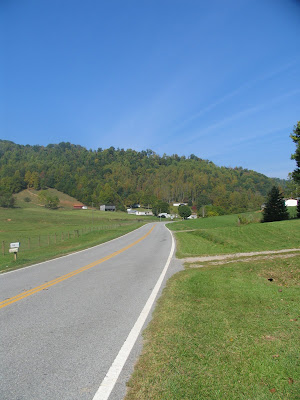 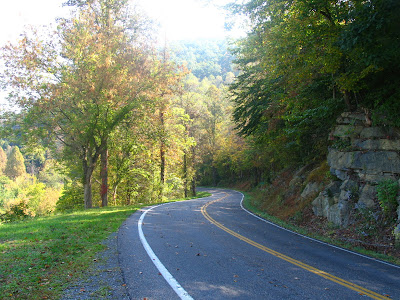 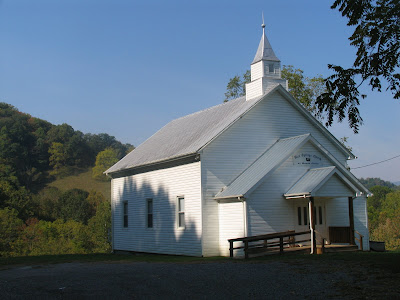 West of Gate City, there is a Virginia Wayside/Scenic View that gives the vista of the Copper Creek Rail Trestle. 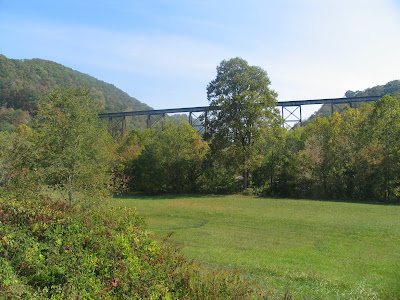 I was finishing up my photos of the trestle when the Norfolk Southern decided to appear. 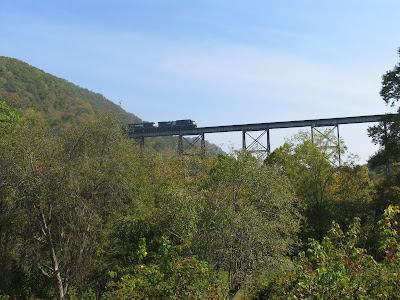 Further up US 23...just prior to Norton and Wise....is a scenic view from Benge's Gap. 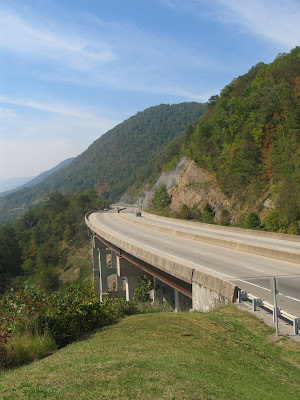 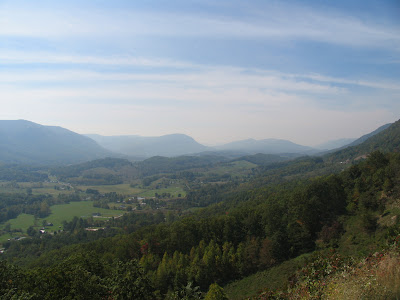 At Pound, I left US 23 to head East on VA 83. Pound is a small Appalachian town in the heart of Coal Country. 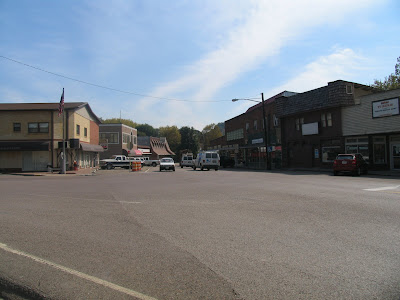 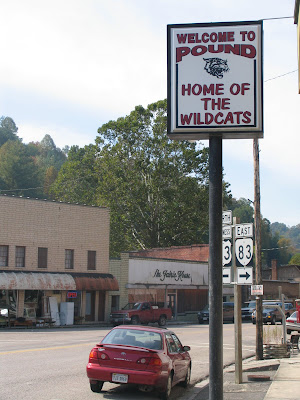 There's not much to Pound, but one thing is for certain - and it is for all of these small mountain towns - they are certainly proud of their local high school.

The next stop was the town of Clintwood, the County Seat of Dickenson County. There is more of a downtown there and it does not appear as downtrodden. By the way, Clintwood is home of the Green Wave. 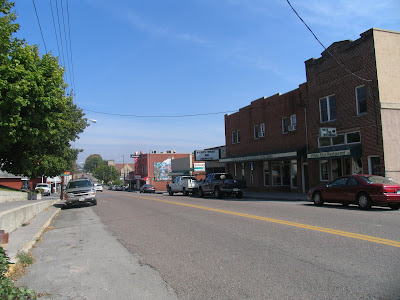 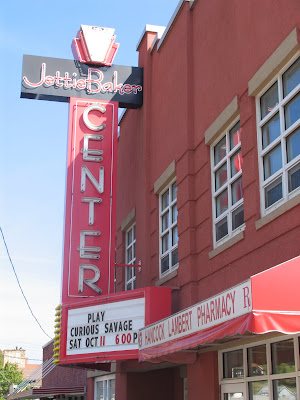 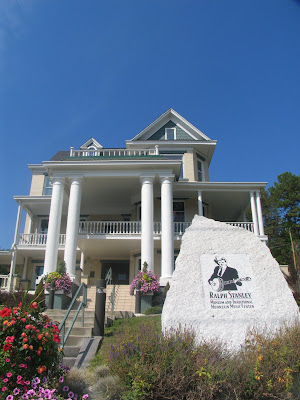 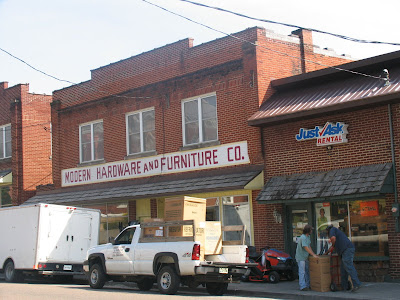 East of Clintwood, VA 83 is a nice drive, but the color was hampered by an explosion in the growth of kudzu that really made it difficult to take any good fall photos.

VA 61 runs through the outskirts of Tazewell, but there are still a handful of cutouts left along or near VA 61. Here's two shots of them. 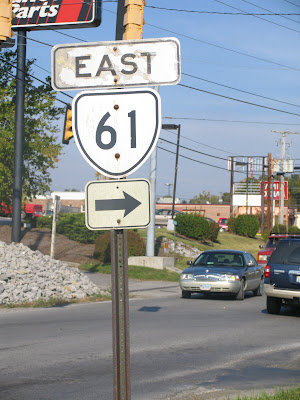 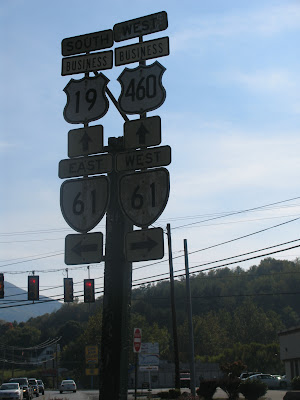 VA 61 from Tazewell to I-77 is a very nice drive, and I'd recommend it to anyone. Near the Tazewell/Bland County border sat the Chestnut Grove Christian Church. It allowed for a great fall backdrop. 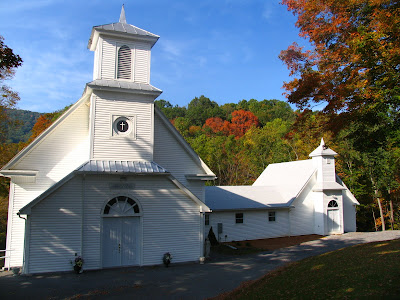 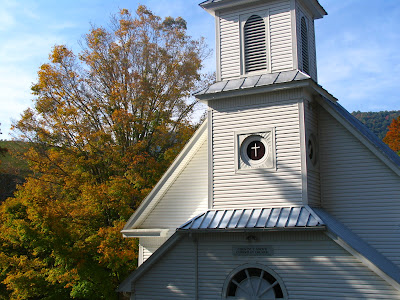 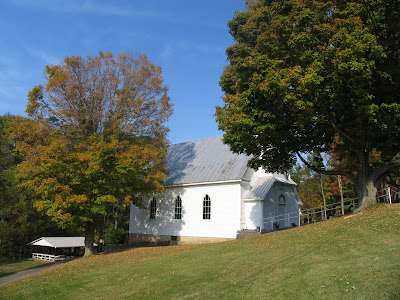 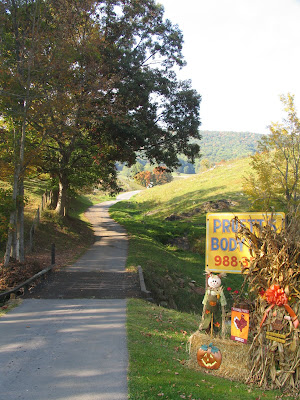 Finally, the last photo can be filed in the "Is this State Highway really necessary?" department. VA 98 in Bland. It runs from VA 42/US 52 to just beyond the Bland County Courthouse. It then becomes SecondaryRoute 605, where it dead end's about a mile and a half later. But nonetheless, here's a photo. 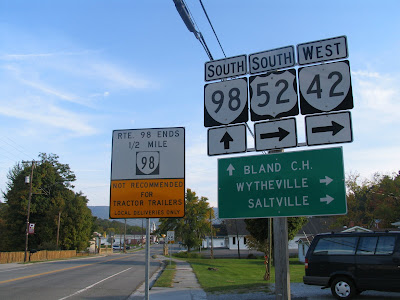 Anonymous said…
One of my most favorite parts of the world. Very scenic and also interesting from a roadgeek's perspective.

At Pound you should have driven the five miles on further north to Pound Gap and the US 23 crossing into Kentucky. At the time it was the most expensive highway project ever in the state and the massive road cut exposes some fascinating geology on Pine Mountain.

Glad you enjoyed the trip! (When you were at Pound, you were only about an hour and a half from my office.)
10:06 PM

Long and Foster said…
Great photos! Looks like a great trip. I haven't been that far into Southwest Virginia but have been as far down as Blacksburg. After seeing all of this I may have to venture further on my next trip.
1:03 PM