By Adam September 29, 2008
Joe Babyak came up from Wilmington on Saturday, and we took a trip along some of the former US Highway alignments in the area.

We focused on old alignments of US 1 and US 421. US 1 from Apex to Sanford and US 421 from Sanford to Julian (between Liberty and Greensboro). We headed back along what some call the Old Football Road which is known as Greensboro/Chapel Hill Road.

With the Raleigh Beltline finally seeing an upgrade in signage, I got hold of two shots of soon to be replaced signs on Western Blvd. 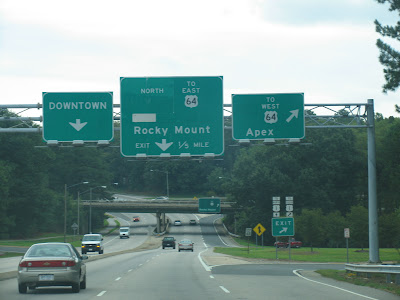 Believe it or not. These signs are over top of even older overheads. (Be interesting to read those.) 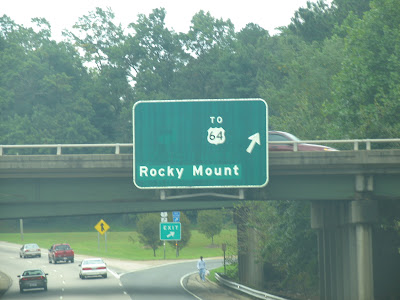 Camera flash through the windshield makes this appear to be button copy. This is an older overhead than the signs in the first photo.

Our first stop was Apex. I spent a bit more time in Apex than this spring on the Bike 5 Trip to Wilmington. We walked around taking photos for a good 30-45 minutes. Apex has an intimate and very popular Main St./Downtown. On Saturday's at the former rail station, there is a farmer's market. 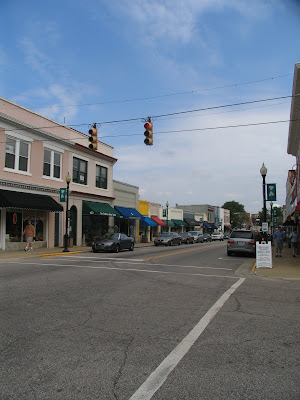 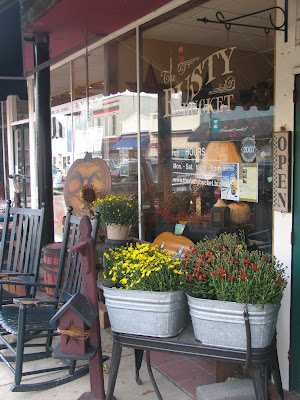 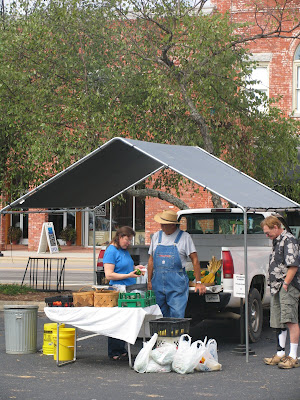 Just south of Apex is the crossroads of New Hill. At the main crossroads, there are three abandoned buildings. A service station, a former general store, and finally a service station with an old ice cream stand and also an old motor court. 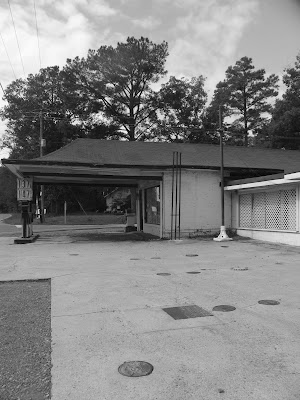 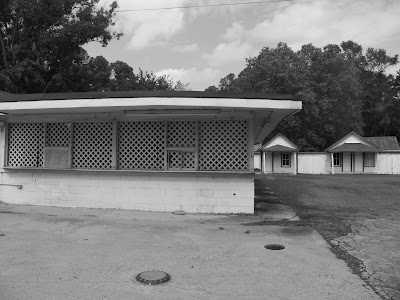 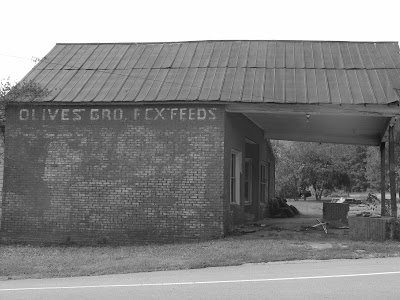 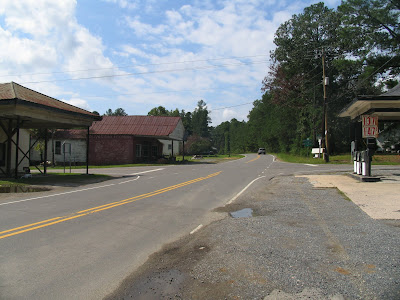 Just south of New Hill in the small community of Bonsal. I took a detour - the main reason was to find an appropriate place to turn around and take a photo for the Carolina Crossroads project. However, sometimes a wrong turn can lead to a great discovery.

Just off of Old US 1 at the Wake/Chatham County line there is a rail crossing. Normally, I'd just turn around, but there was some activity going on. So, as a result, we decided to stop. The next thing a steam train whistle blows and appearing around the bend was a steam locomotive of the New Hope Valley Railway. 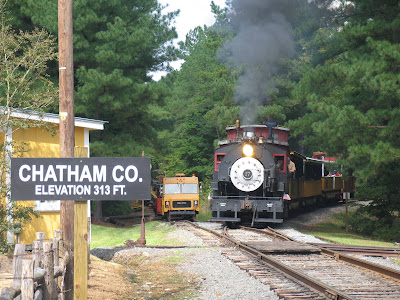 The New Hope Valley Railway is a six mile excursion train that runs on the first Sunday of every month. On this day, they were running a charter, but the good fortune allowed us to grab some great photos. 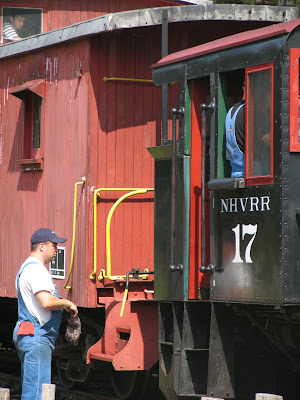 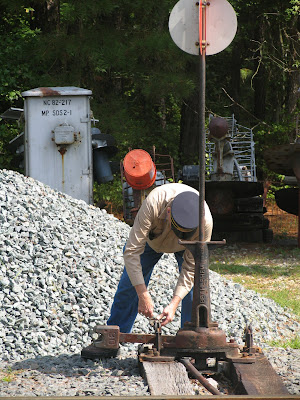 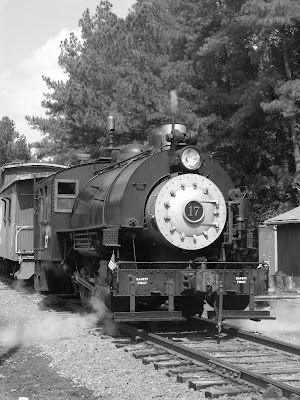 After taking a brief ride on what will be the US 421 bypass of Sanford, it was time to head into town along US 1 Business and spend some time walking around there.

Sanford has an amazing old Coca-Cola Building. The building was erected in 1908 and the current exterior design was done in the 1920s. 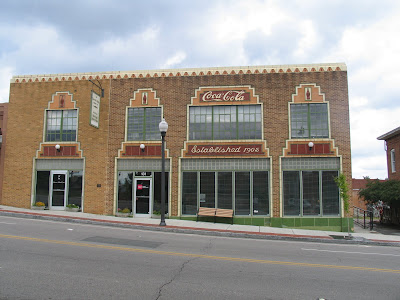 There is plenty of other great historical buildings within Sanford. 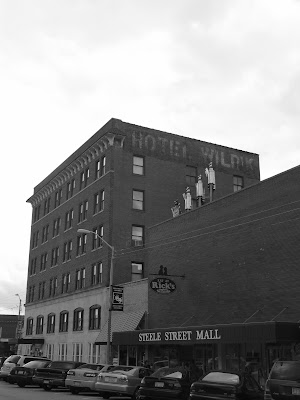 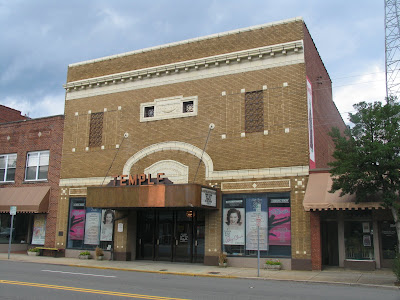 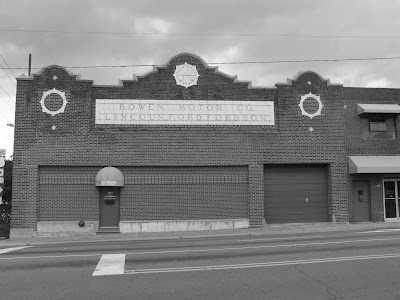 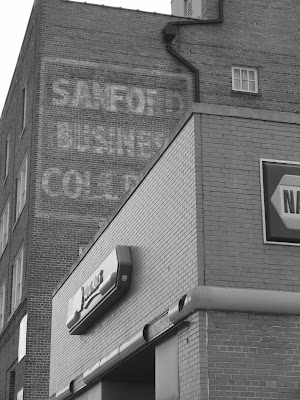 After Sanford, it was over NC 42 and NC 902 to Old US 421 and the small town of Goldston. This former gas station has now become a BBQ Joint known as Rufus' Restaurant. 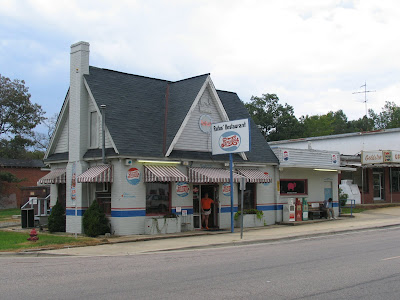 I could be wrong, but I highly doubt you will be able to get a Coca-Cola here.

Next was the Camelback Bridge over the Deep River in Cumnock. Dave Filpus' recently went there, and his blog entry was part of the reason we made this trip. The bridge was built in 1910 and has been on the National Register of Historic Places since 1995. It is now part of a local park called "Deep River Park". 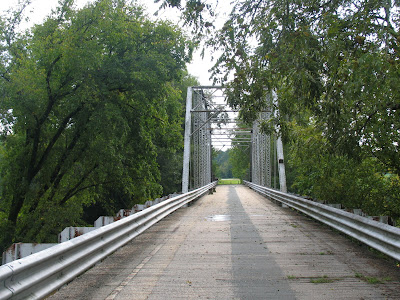 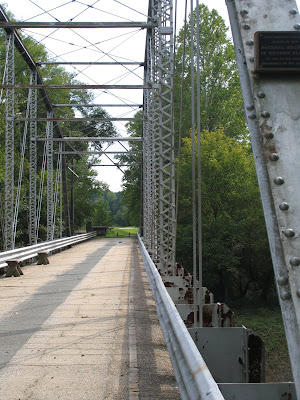 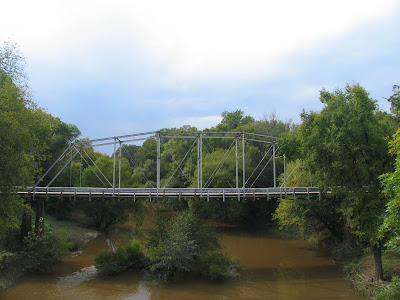 We followed old US 421 back again through Goldston and through Siler City, didn't have time to really stop there or Liberty either. In Julian, we picked up NC 62 until we reached Greensboro/Chapel Hill Road and followed that all the way to NC 54.

If there is a backroad you want to take, try this one. It's worth it. A first stop was the Kimesville Dam. The dam, which accompanied a former mill, was built in 1812. With recent rains, it made for a great waterfall. 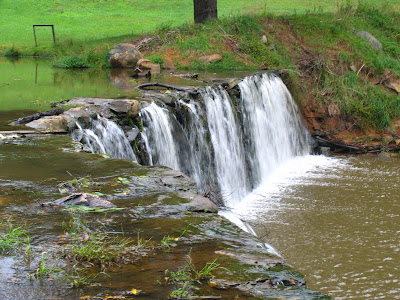 At the country road's intersection with NC 49 is a former corner grocery. Complete with an old Orange Crush and Guilford Dairy Ice Cream Signs. 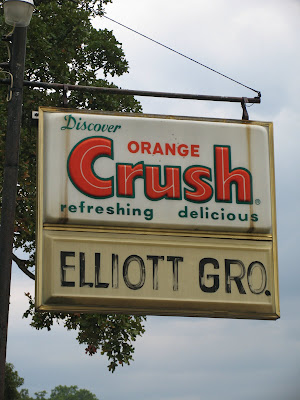 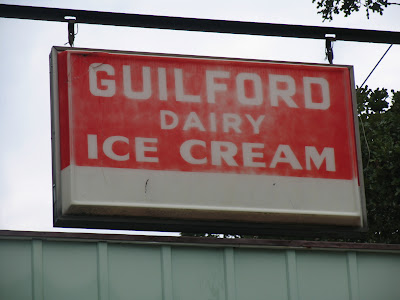 Here's what NC 49 looks like after a soft but drenching rain. 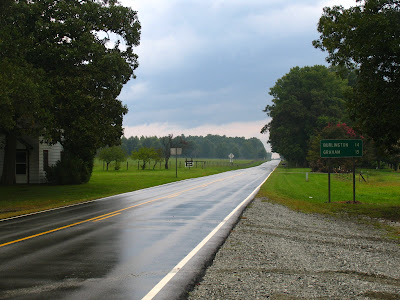 Finally, just west of Eli Whitney is the Spring Friends Meeting House. A church that dates to the 1700s. 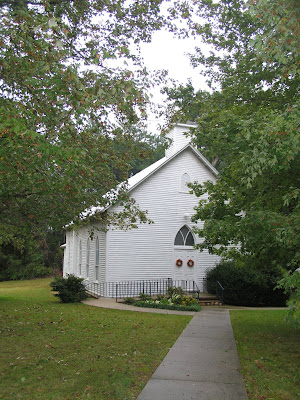 I am on vacation all next week. So hopefully, like the fall of 2006, I'll take quite a few daytrips...most likely into Virginia.

On the now-missing sign, notice the ghosts of the NORTH 1 designation and Wake
Forest destination: it looks as if the shield and letters may have simply been painted out. Also note the ghost of the "EAST" designation above the TO 64 designation: the sign originally showed either EAST BUSINESS or EAST BY-PASS 64 (can't tell for sure from old Google Street View imagery). The Rocky Mount destination is patched over whatever was underneath. The sign may well have dated to when the Beltline was originally completed to New Bern Ave/U.S. 64 in the late '60s. Presumably the now-covered panels on the gantry are its siblings.

I've observed that most if not all of the other square-cornered relic signs along this never-upgraded section of the Beltline are apparently also mounted in front of even older round-cornered signs. There too, one wishes we could see the relics hiding underneath.

Presumably all the old signage will finally be removed as part of the I-440 upgrade work through the area, which has finally just begun. If I had sufficient disposable income, I'd consider trying to arrange acquisition of all that old signage for myself. It would be a shame for all that history to be lost.
12:15 AM

Zachary said…
Oops, maybe I should have said "mid '60s" for when the Beltline segment reaching New Bern Ave opened.
12:19 AM