By Adam February 17, 2006
Wednesday, I headed down to our Roxbury, New York store. Roxbury is located near the Catskills and is our most rural store in District 10. (New York and New England).

Notes: As a result of fears to a possible failure of the Gilboa Dam in Schoharie County, there are now Flood Evacuation Route signs throughout NY 30. An example of such below. 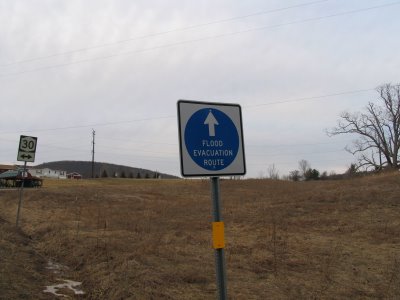 The Schoharie Creek Valley is a great drive espescially from Middleburgh to Gilboa. NY 30 has access to two state parks, Max V. Shaul and Mine Kill. There is also access to the Mine Kill Falls Overlook but that was closed. NY 30 crosses over the Schoharie numerous times and there is also a Parking/Viewing area south of Middleburgh.

Another great stop is in North Blenheim, which is home to the Blenheim Covered Bridge. The bridge which was built in 1855 is the longest standing single span covered bridge at 228 feet. It is also one of six remaining 'double barrel' - meaning two separate lanes - covered bridges in the country. One of the other five is the Philippi Covered Bridge in West Virginia. The link to the Blenheim Bridge is to fellow gribblenationer Doug Kerr's feature on the bridge. I got about ten photos of the bridge, here is one below.

When I get around to the New York and New England feature pages, I hope to include a feature on this bridge. For now, here's a direct link to a larger (1600 x 1200) version of the picture above.

The trip went well, got a lot done at the store to get them on track with some of the programs I have going at our New York stores.

The Mine Kill Falls Overlook is generally only open during the summer months. It is quite nice though.

Other things to see on the way include the Old Stone Fort in Schoharie, and Vroman's Nose just south of Middleburgh. I do have a page up about Vroman's Nose
http://www.gribblenation.net/nypics/vroman/
7:35 AM