By Challenger Tom June 25, 2019
A couple years ago I drove a brief segment of California State Route 131 on Tiburon Boulevard. 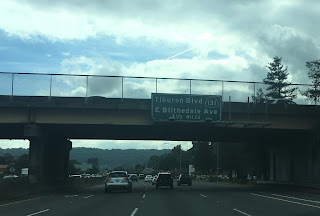 CA 131 is a 4 mile east/west State Highway entirely contained within Marin County.  CA 131 begins at US 101 Exit 447 and is aligned entirely on Tiburon Boulevard east into the town of Tiburon where it ends at Point Tiburon.  From Point Tiburon there is connecting pedestrian ferry routes to San Francisco and Angel Island.

CA 131 is a post-1964 Highway Renumbering for what was Legislative Route Number 52.  LRN 52 was added to the State Highway System in 1919 during the Third State Highway Bond Act according go CAhighways.org.

The San Francisco and Northern Pacific Railroad was reformed as the California Northwest Railroad Company by 1898.  By 1907 the California Northwest Railroad had been absorbed into the Northwest Pacific Railroad by 1907.  Passenger rail service over the ferry landing in Tiburon ended in 1941.  Passenger service over the Tiburon ferry landing resumed in the 1960s but all rail service, including freight shuttered in 1967.  The rails in Tiburon were removed during the 1970s but the grade of the San Francisco and San Rafael Railroad was eventually recycled into the present pedestrian pathway running along CA 131 today.

LRN 52 first appears on the 1920 State Highway as a 1919 special appropriations road.

According to AAroads the route LRN 52 apparently once took San Rafael Avenue through Belvedere before entering Tiburon.  The modern alignment of Tiburon Boulevard seems to have been constructed by 1930.

LRN 52 appears on the 1935 California Division of Highways Map of Marin County running interestingly from Campo Alto eastward on Blithedale Avenue to US 101/LRN 1.  From US 101/LRN 1 the route of LRN 52 is shown following Tiburon Boulevard east to the ferry landing at Point Tiburon.

According to CAhighways.org the definition of LRN 52 was truncated from Campo Alto in 1947.  This can be seen by comparing the 1946 State Highway Map to the 1948 edition .

CA 131 doesn't appear as a signed highway until the 1969 State Highway Map.

Of note; according to AAroads above there was once a proposal to build a bridge to San Francisco via Point Tiburon and Angel Island to San Francisco.  These plans seem to have been effectively blocked when Angel Island became a State Park in 1955.  There used to be a link to the history of the bridge project but the link AAroads used has run dead.

A link to the unbuilt bridge from 1962 connecting Tiburon to San Francisco can be found on the link below.  The structure was known as the Marin-San Francisco Crossing.

1962 Draft of the Marin-San Francisco Crossing