I-95 Signage Update and More

By Bob Malme October 27, 2013
I took a road trip on Saturday (10/26) to attend the Fall Meeting of the New England Archivists professional association being held at Amherst College. The trip took me along the lower half of the '128 Belt' (I-93 and I-95) from Braintree to the Mass Pike West to I-91in Springfield and north from there to MA 9 to Amherst. I took the opportunity to make note, and take some photos, on progress of signage projects I saw along the way.

A. I-93 Braintree to Randolph
No progress here, little done in the last month. Hopefully work done on the SE Expressway stretch, but did not have time to check that area. The only thing going on was pavement work, fortunately, on I-93/US 1 North which closed down 2 lanes and backed up traffic in the morning back to I-95 (and was still going on when I returned that night, unfortunately).

B. I-95 Add-A-Lane Project, Dedham to Needham
No signage changes along the active construction zone northbound, but work has progressed near the MA 109 interchange as seen below: 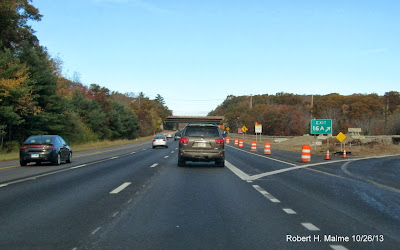 Work has largely been completed adding the extra lane up to the bridge area. The new support spans for the future bridge are up, and work is progressing on the bridge deck: 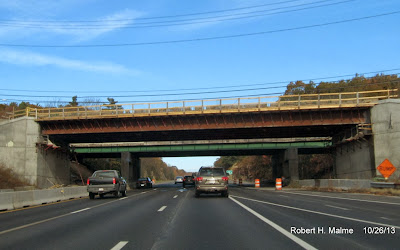 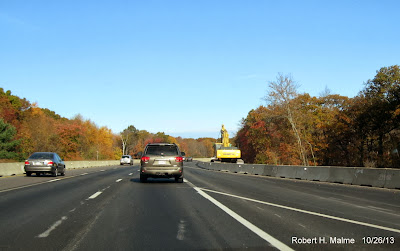 Work on the new bridge for Great Plain Avenue has been completed as has the new deck for the Southbound MA 135 bridge, the previous split traffic zone that direction has been removed but can't be seen beyond the barrier on the left-- 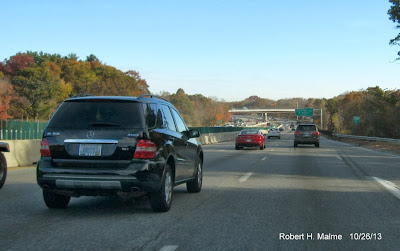 C. I-95 Signage Project Newton to Lexington
Work has progressed much faster on the I-95 signage project between MA 9 and MA 4/225 than on I-93. There are several new signs already up between Route 9 and the Mass Pike. This is the first new sign, a 1 mile advance for the MA 16 exit: 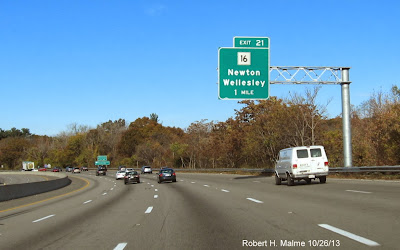 This is currently the only new sign up for this exit in either direction. There are a couple new signs up for the next exit, Grove Street: 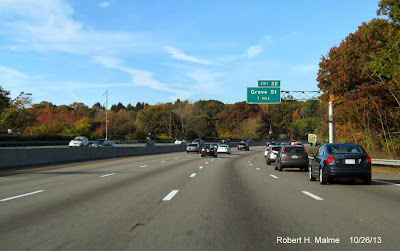 Both this 1 mile advance sign and the other new one below, are missing the MBTA Station text that was listed on the previous signs-- 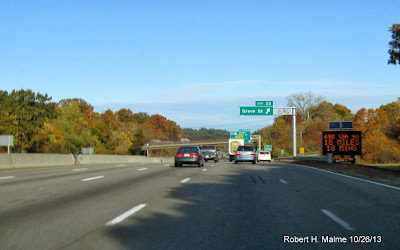 I assume that information will be placed on a ground-mounted auxiliary sign that has not been put up yet. Also the photo above has one of the newish portable VMS signs stating the time to I-495 via I-90. Speaking of the latter, here's the new sign approaching the I-90/Recreation Rd/MA 30 Exit, neither of the advance signs for this exit have been updated-- 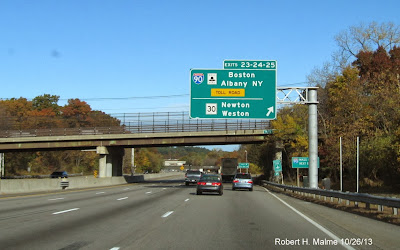 This sign has several new features not found in the old signs, a Mass Pike Logo instead of text, a yellow Toll Road banner, and a line separating MA 30 from I-90. No note about Recreation Rd, same as the old sign. The logo replaces the text 'Mass Pike' and would be easier to take down should the turnpike ever become toll free. The sign was designed before MassDOT decided to make this an ExiOnly Lane to help traffic merging from I-90 on the other side of the interchange. I assume an exit only banner will be added in the future. For now there are a couple portable VMS signs warning of the lane ending.
There was also new signage along the exit ramp, here at the merge of the two exit ramp-- 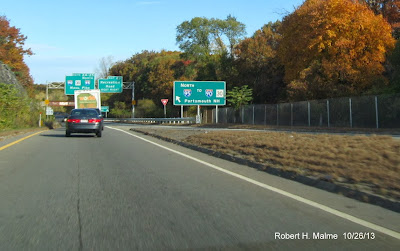 The overhead signs further down the ramp had not been changed, not the signs at the ramp for the MA 30 exit: 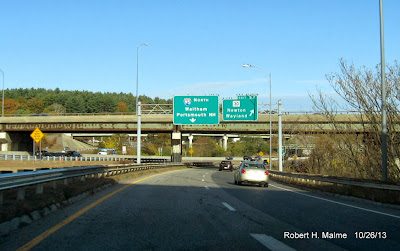 The only change was at the end of the ramp where there is now only 3 lanes of I-95 North traffic and a sign notifying drivers at the on-ramp they do not have to yield to oncoming traffic.

I took a quick detour up to US 20 to look at other new signage that had been spotted recently. There are several new ground-mounted auxiliary signs both north and southbound. Here's one for MA 117 ahead of the US 20 exit: 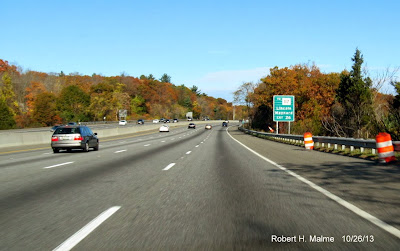 This replaced a simple trailblazer saying To MA 117, as for the exit itself only the last sign northbound has been replaced: 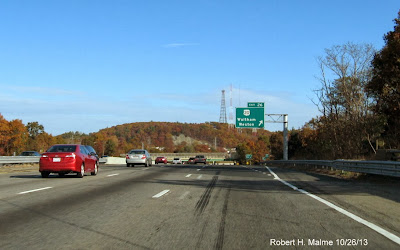 There were also several new ground-mounted BGSs for I-95 north and south on US 20.

Here's a new auxiliary sign for the Mass Pike exit on I-95 South: 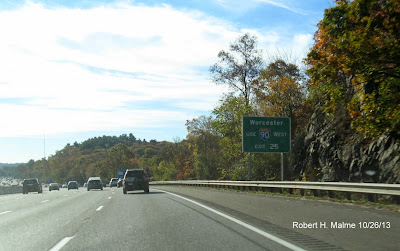 Indicating those wanting to go to Worcester should take I-90 West. Probably better than taking MA 9 all the way to Amherst. I also spotted new on-ramp signage for the Mass Pike exit from MA 30, but did not have time to take the photos.

D. Other Road Trip photos
The rest of the photos are random shots I took on the way to Amherst and on the Amherst College campus:
Here's the signage at the split of the ramp to I-91 from I-90 Mass Pike, Exit 4: 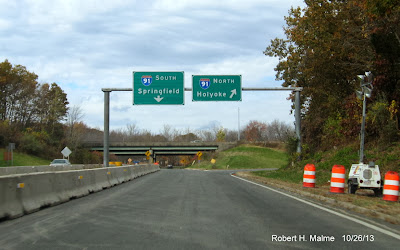 There's currently a construction project going on along I-91 from this exit northward fixing the interstate bridges. Once I got to Amherst I followed MA 9 after it split off from MA 116 South: 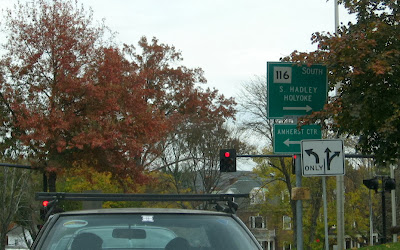 Before the conference I wandered around the college campus and surrounding area. There was a Farmer's Market going on that morning: 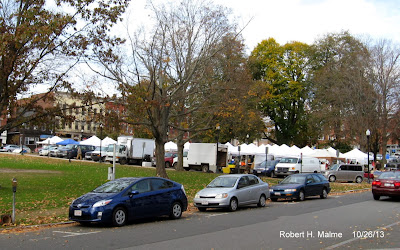 I looked around for possible healthy lunch options but would have had to have made my own chicken or lamb sandwich, so I went to Subway which was across the street. Here's a couple older buildings on the Amherst campus: 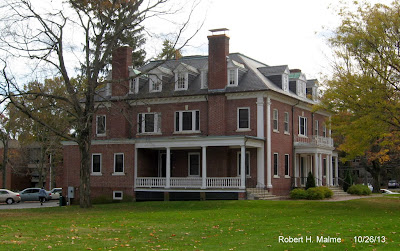 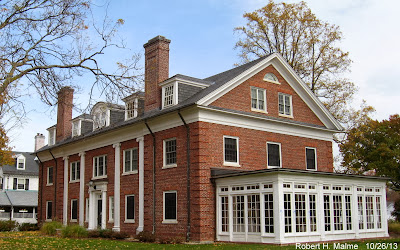 These may have been built as dorms but now house administrative offices. Here's the place where the NEA Meeting took place: 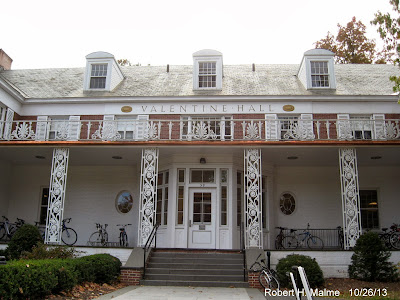 Valentine Hall, not named, I assume for the ex-Red Sox manager. Lastly, here's the sign I saw when leaving campus later that afternoon: 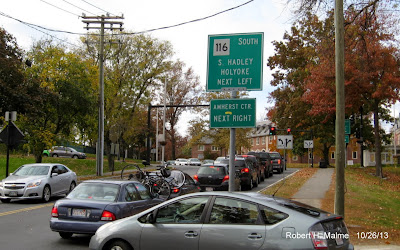 I continued straight on MA 9 reversing course back to the Boston area. I did notice one Route 9 circle sign heading back, but did not get a photo. I also took I-291 heading back to the Mass Pike. It appears the signage project there is complete. The one oddity is that there's a 'Begin I-291' sign heading east just before a new East I-291 Mile 1 sign.

Other then being held up about 25 minutes by the I-93 paving project nothing notable to report on the way back. Several I-93 drivers thought they could shave some minutes off their wait by using the Exit 3 Houghton's Pond off-ramp and then getting back on I-93. They found out, including one Cadillac with NY plates that crossed all 4 lanes of bumper-to-bumper traffic to get off, that the on-ramp was closed and they either had to reverse direction or navigate through the Blue Hills Reservation to Braintree in the dark.

E. I-93 Signage Plans
Hopefully, I'll have something to report on the I-93 signage project soon. For now, I post a few of the signage plans I got from MassDOT: 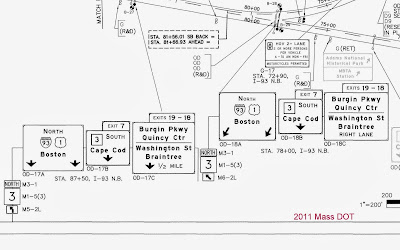 The above is for the Braintree Split Northbound. Notice the use of MA 3 North trailblazers instead of having the additional shield on the sign. 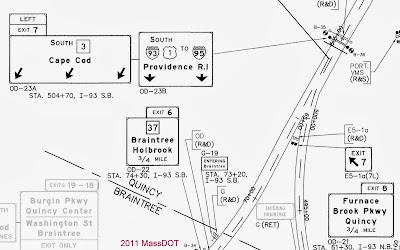 The Left Exit signage is now outdated even before it has been put up since MassDOT changed the lane configuration on October 24 so that MA 3 only has 2 lanes, not 3 at the split. This was done according to the press release to solve safety issues caused by late drivers trying to access I-93 South coming from the HOV lanes trying to cross 3 lanes of traffic.

Here's an excerpt for signage at Exit 11, Granite Avenue. Notice the use of trailblazers for MA 3 here too in addition to the already posted I-93/US 1 guide or paddle signs--

The reassurance assemblies will have all 3 routes mounted on one post, similar to those put up for I-93/US 1 between Randolph and I-95. I have all 59 plan images and can post more if requested.