By Bob Malme June 04, 2013
I attended the Portsmouth, NH Road Meet on Saturday June 1. I used the trip up and back to look for any new signage I previously had not seen or photographed along the way. Some of these photos have been posted in other forums, but hopefully there's not too much repetition.

A. Trip along I-93 North
I took a little jog west on my way north to check out any progress on the I-93 signing projects. According to the MassDOT website, the projects along I-93 north of Boston are complete. The project between Randolph and Boston is about 20% complete. It appears almost all the foundations for the new overhead sign support structures have been placed. A MassDOT source confirmed this and said new signs along this stretch of highway should appear by the start of fall. No additional new signage had been placed at any of the intersecting roadways other than those already changed between Exits 8 and 11. I did not take any new photos along this stretch heading north until the I-95/128 exit in Woburn.

B. Journey along I-95 North
I have not done too many trips along the I-95 corridor north of I-93 and the last time I did not have a camera. I thus took some photos of the newer signage that has appeared around the I-95/128 split in Peabody over the past couple years. First though, existing I-95 signage on '128': 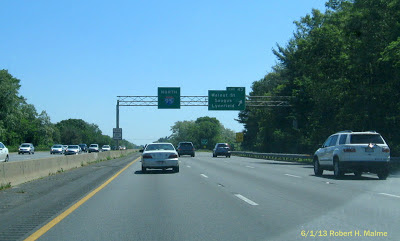 Don't know if the signage along this stretch is due to be replaced soon. As part of a re-signing project along MA 128 from Peabody to Gloucester a couple years ago, signage was also replaced at the I-95/128 split in both directions. Here's the replacement for the existing diagrammatic sign that was placed after this part of I-95 was opened: For those interested in the future mile based number, the interchange is at Mile 64. For those who prefer arrow-per-lane signage, here's the overheads at the split itself: 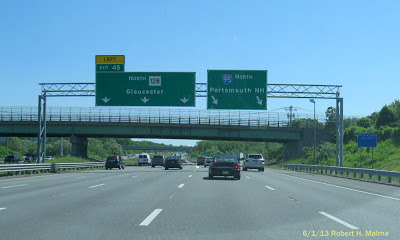 After the split, I only had 44 miles to go to Portsmouth, at least according to this sign: 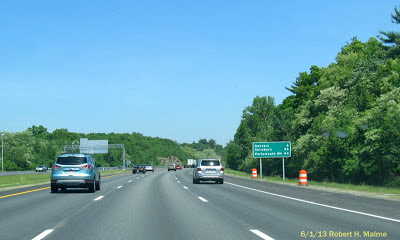 The existing exit signage along this stretch of I-95 between Peabody and Georgetown is to be replaced by a project that was advertised several months ago by MassDOT. No evidence of it having started was found. The section of I-95 north of Georgetown had its signage updated a couple years ago. This is the first new sign heading north: 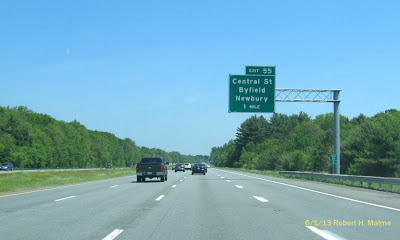 The Central St interchange is at Mile 81. The next exit is for Scotland Road in Newbury... 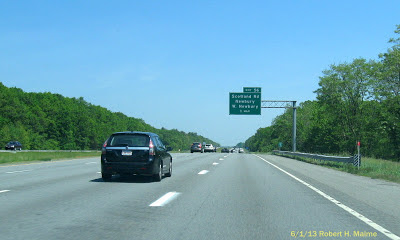 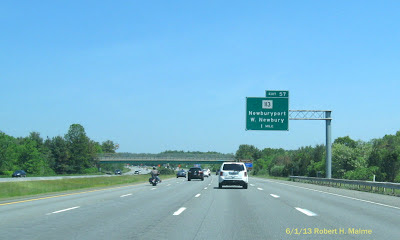 The construction signs seen in the distance are for the project that will widen the stretch of I-95 to four lanes over the Merrimack River and replace the current bridge that only has 3 lanes in both directions. Directly after the bridge comes the next exits for MA 110, here westbound (and for I-495 for those traveling north): 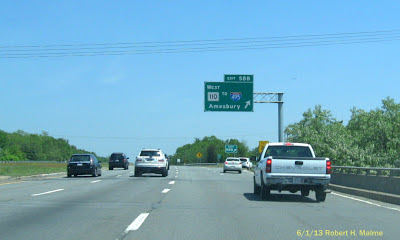 This is at Mile 88. The final exit in Mass. heading northbound is for MA 286: 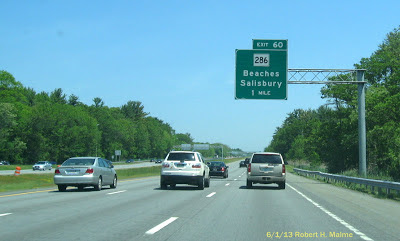 Currently Exit 60, the milepost for this exit is 90 with the NH border less than a mile away, as can be implied by the signage at the exit itself: 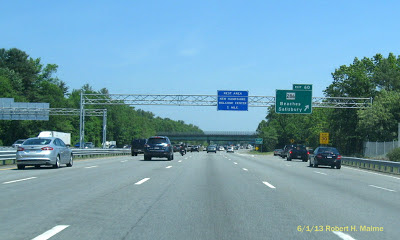 The Welcome Center is not the location of the NH Liquor Store, that is a few miles farther north. Signage along the NH stretch of I-95 has been recently replaced also. Unlike MassDOT, which balked at requirements for arrow-per-lane signage over diagrammatic signage in the latest MUTCD due to extra cost (and hopefully for looks as well), drivers in NH approaching Portsmouth see the likes of these at Exit 5: 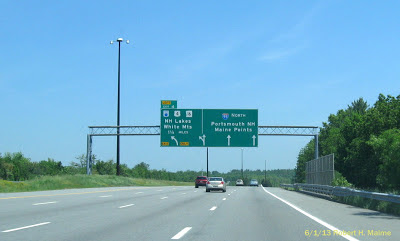 For a sign that large you think the route shields could be bigger. Also, why the need to add 'NH' after Portsmouth? Is there a Portsmouth ME?

C. Photos from the Meet
The major road attractions in the Portsmouth area were the bridges over the Piscataqua River. Those existing, having been temporarily closed recently, and those under construction. Here's a view of all the bridges from Pierces Island: 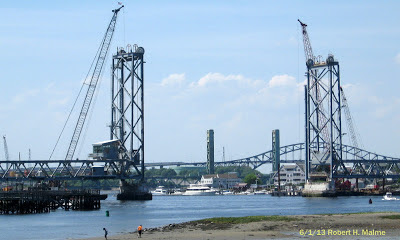 The Memorial Bridge under construction backed by the Long Bridge (which was closed earlier this year after being hit by a barge, and the well-traveled and utilitarian named Piscataqua River Bridge and I-95 in the background. Here's a closer look at the Memorial Bridge: 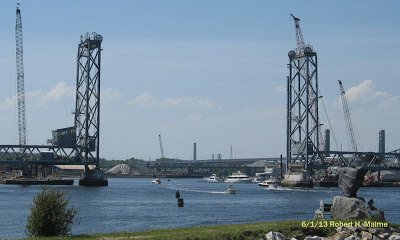 The middle section still needs to be placed before the bridge can open. Currently scheduled for July. The stop at Pierces Island is right across the river from the Portsmouth Naval Yard (in Kittery, ME, of course). Here's a view of couple Coast Guard ships docked there: 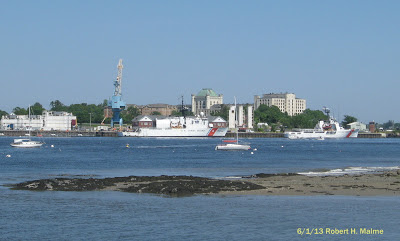 The journey from the Island took us over the re-opened Long Bridge and into Maine where we traveled US 1 to where it is currently closed awaiting the new Memorial Bridge: 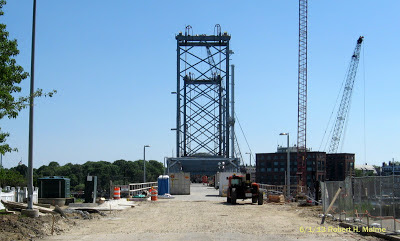 In case I forgot the short trip to Maine, I took this photo of the first US 1 sign in the state heading north: 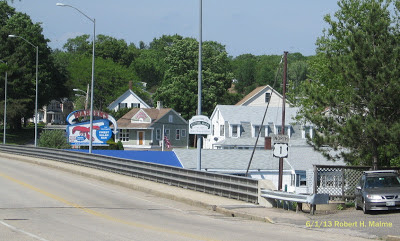 Doesn't take long for a lobster to make an appearance on a billboard. The last stop on the tour was over and next door to the former bridge taking the Spaulding Turnpike over the Piscataqua River north of Portsmouth: 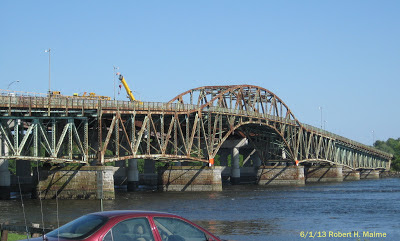 D. Return Trip
I took a few more photos on the drive back to capture some of the newer signs I did not capture northbound:
Here is a new overhead assembly for the first 2 exits in Mass. These appear to be MassDOT design but are actually in NH: 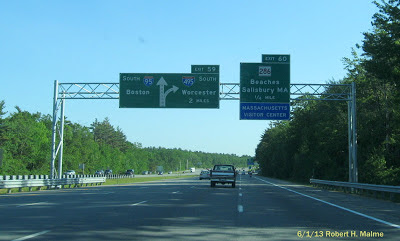 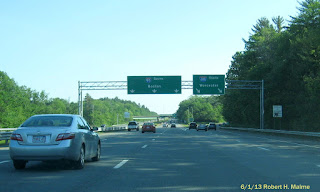 The arrow-per-lane signs at the exit itself work here. Approaching Danvers you get to see, given current sign regulations, only one of the few signs that have both an I-95 and a MA 128 shield, here on both sides: 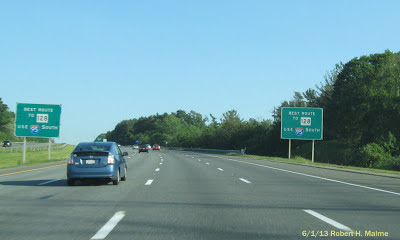 Going south in addition to new signage for the MA 128 interchange, there are some new diagrammatic overheads for the US 1 South Exit 46 (at Mile 66): 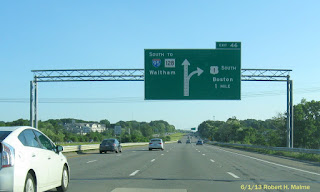 Again, both I-95 and MA 128 together. The prohibition of having a 128 shield with an I-95 sign starts at current Exit 45. Not all the signs in this area have changed, however, this older signage is still at the US 1 off-ramp: 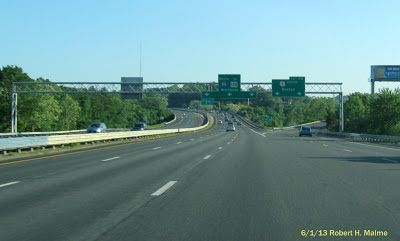 Was the pull-through on the left designed that way to save money? The newer signage resumes after the US 1 exit and continues until the US 1 Exit after the merge with MA 128. Here are the advance signs for 128: 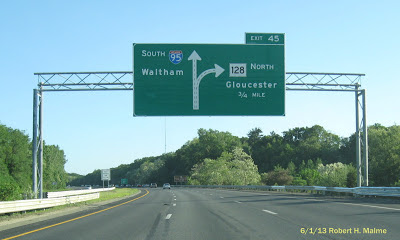 And for those who prefer non-diagrammatic exit signs: 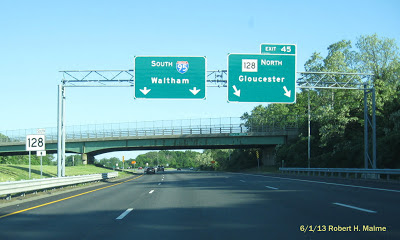 Notice the auxiliary sign for South MA 128 which will be present at most other intersecting roadways between here and Canton. Here's the newish signage for the Exit 44 (Mile 63) US 1 exit: 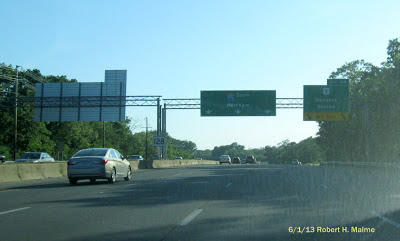 Sorry for the glare, notice the 128 shield on the center overhead support. Wonder why here, but not at other places with I-95 pull-through overheads? This was the last photo I took on I-95/MA 128. Congestion at the I-93 cloverleaf backed up traffic to just below the crest of the hill above. When are they going to replace that? They are planning to reconstruct the I-95/I-93 interchange south of Boston starting in 2016, but no date on this worse designed exit. I did get a new photo of the I-93 replacement signage for the I-95 north exit after I finally made it through: 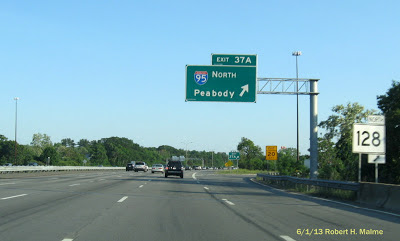 I plan to post additional entries, however I do not know whether my next post will be from MA or NC. I've applied for a job at Duke and hopefully will hear back in a couple of weeks.