By Bob Malme August 11, 2012
I took a (hopefully) final trip south of High Point to check on progress on building the new I-74 freeway between Exit 79 (Cedar Square Rd) and Exit 86 (I-73/US 220 North) before I returned to the Boston area. I was joined by Bill Travers, my local source for updates on the construction project. (Fortunately, nothing happened with the car on this trip.)

We traversed the I-74 construction area from Cedar Square Road south to US 220, including a couple stops I hadn't made in the last couple of years. Approaching the I-74 interchange on I-85 South-- 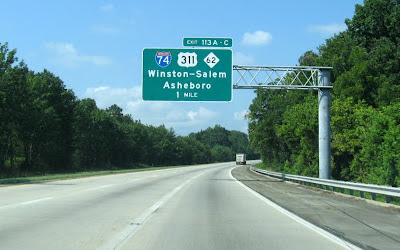 I realized I had not taken any photos of this interchange since it was opened in 2010. Here's the signage approaching the start of the C/D ramps-- 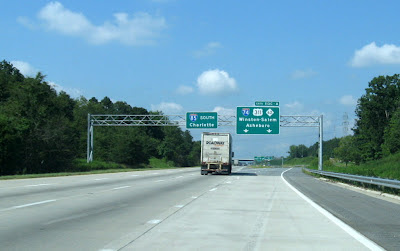 I had time to go west on I-74 to the Business 85 interchange and back before meeting Bill. I had already taken photos of most of the signage along the route.

1. Cedar Square Road
A new photo of the approach to the current end on I-74 heading west on Cedar Square-- 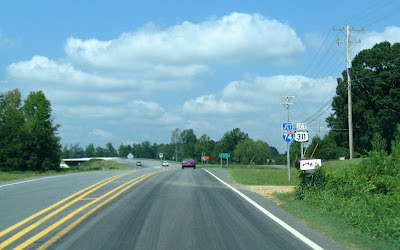 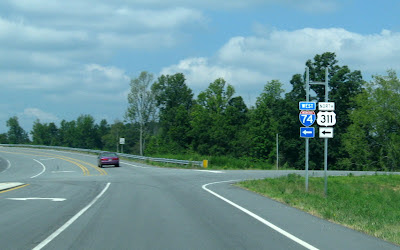 2. Spencer Road
This was the official starting point for the second phase of the I-74 aka US 311 Bypass project. The road was cut in two pieces by the freeway construction. The part west of I-74 was renamed Old Spencer Road. The part east now turns left and extends south paralleling the future I-74/US 311-- 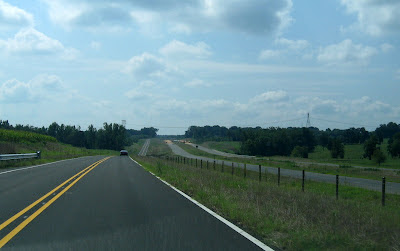 The road was to connect with the next cross-freeway road to the south, Banner Whitehead, but construction stopped about 1/4 mile short. As far as I-74 goes, a special ground stabilization truck was working in the median of the freeway-- 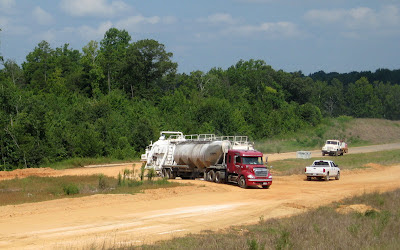 A lot of soil stabilization work would seem to threaten the planned November opening date for the highway. As it turns out, on Friday August 10 NCDOT did move the planned completion date for the project back (more on that below). Here's a look back along the extended Spencer Road back toward Cedar Square Road as we were leaving to head to our next destination-- 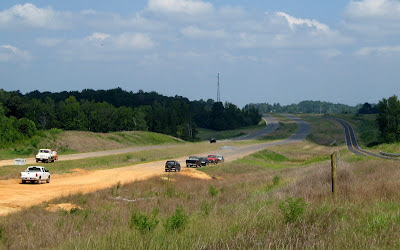 3. Banner Whitehead Road Bridge
This road was closed early on in the construction to realign the roadway and build a bridge across the I-74 freeway. Here's a look at the bridge itself-- 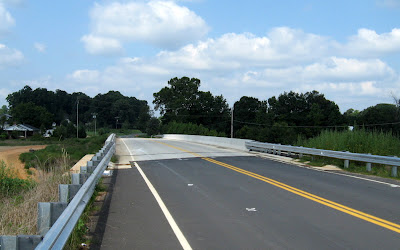 This was completed in 2011. While the bridge only needs one more coat of pavement, the same thing cannot be said of the freeway it crosses-- 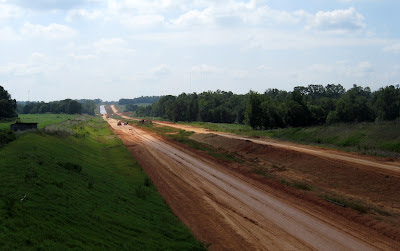 This is looking Southeast towards Branson Davis Road. More grading is needed before pavement layers can be placed here and northwest toward Spencer Road-- 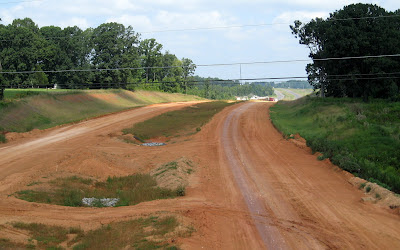 The trucks in the distance are for the soil stabilization project seen above. Spencer Rd ends behind the grove of trees on the right. There are several houses that now are only connected to Old Banner Whitehead Rd-- 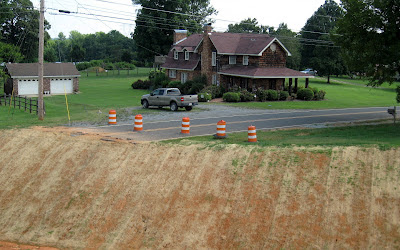 This house is probably too near the future freeway (at the bottom of the embankment) for my comfort anyway. The contractors had not reconstructed the connection between the new and old road forcing residents to go down or up a significant gravel embankment to access their house or access the new roadway.

4. Branson Davis Road
Since I included several photos of the new bridge and the excavation project to bring the freeway to grade under it in my last post I will include only some shots taken from the new access road built paralleling the future westbound roadway-- 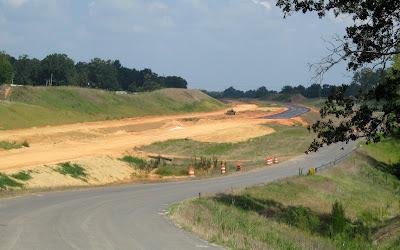 This is a view of newly paved roadbed on the westbound lanes from the intersection of Branson Davis and the Access Road. The road parallels the future freeway for about half a mile. Here's a view from near the top of the hill seen in the photo above back toward the Branson Davis bridge-- 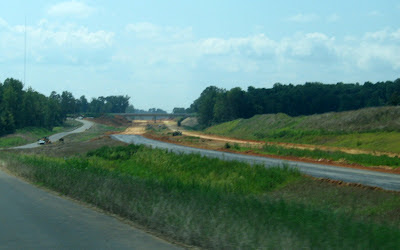 The truck seen at the bottom hill belonged to construction workers trying to complete a catch basin along the side of the westbound lanes.

5. Walker Mill Road Bridge
Workers were busy here excavating around the bridge area, trying to bring the roadbed down to allow proper clearance under the bridge-- 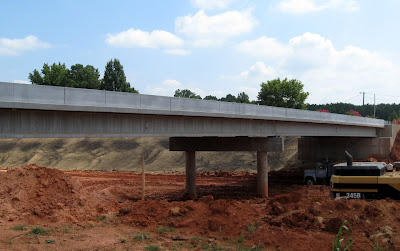 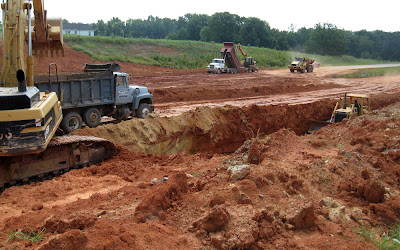 To our next destination--

6. US 311 Bridge and Interchange
This bridge has been open for awhile, approaching along US 311 South-- 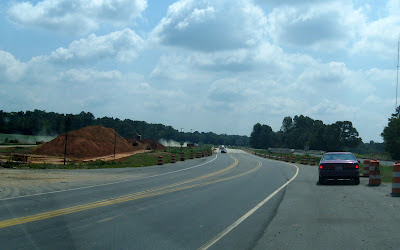 Notice the hill (pile seems to be inadequate) of dirt excavated from Branson Davis and Walker Mill Rds on the left, the dust seen in the background are from more full trucks on their way. While the freeway is paved, the on and off-ramps are less complete. The future west ramps are in the previous post, here are the future east ramps-- 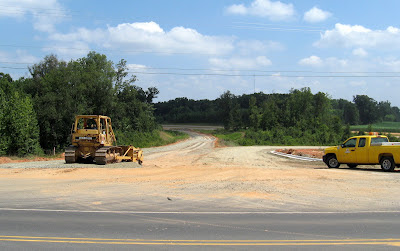 Some final grading appeared to be going on during our stop. We parked the cars and hiked the new railroad tracks to the new bridge along the old US 311 alignment (keeping our ears and eyes open for any untimely trains)-- 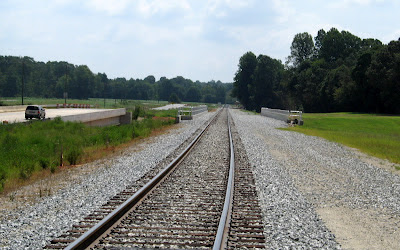 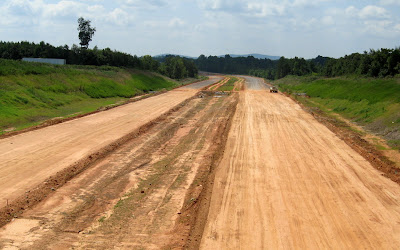 Good and bad news. While the roadbed just south of the bridge is still in need of pavement, you can see that further south the pavement begins and continues (with the exception of around the Plainview Road Bridge, see below) all the way to US 220. If you haven't read the previous post, it details why this stretch of the 'US 311 Bypass' will apparently not be signed as US 311 after all.
Contractors were working also just north of the bridge of roadbed grading as well-- 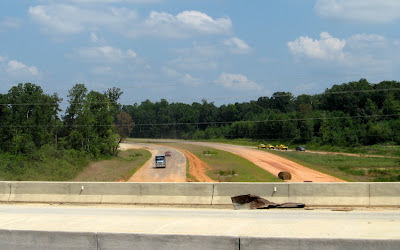 7. Plainview Road Bridge
Workers were putting the finishing touches along the stretch of roadway in this area. The view southeast from the farm access road shows progress in grading and paving along with placing guardrails-- 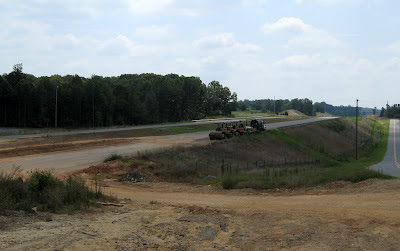 There are two tall berms in vicinity of the bridge. From the top of the west one, here's the view north back towards US 311-- 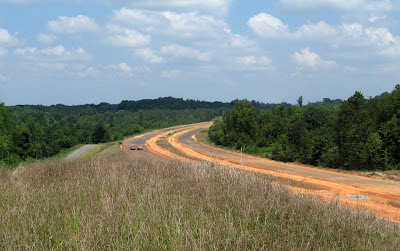 The roadbed is receiving another (final?) coat of asphalt. Meanwhile, looking east at the bridge one sees Mr. Travers keeping an eager watch on the construction going on in the roadbed below-- 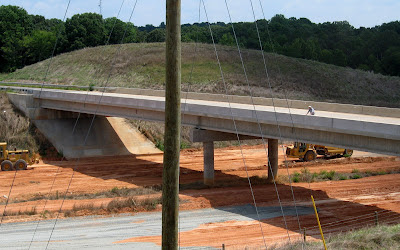 Which was, hopefully, some final grading of the roadbed near the bridge-- 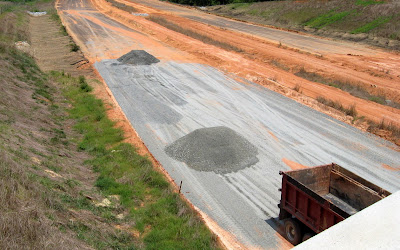 8. Heath Dairy Road Bridge (and US 220 Interchange)--
Not very much had changed since I documented the progress in my previous post. But here is a photo to prove I was there-- 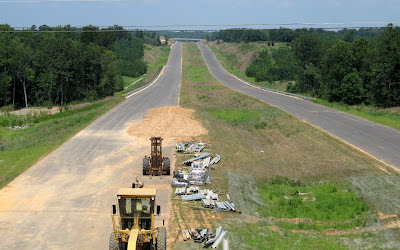 The view looking back toward Plainview Road showing progress in placing guardrails along the shoulders and in the median. A view toward US 220 shows no further added signage (or just as good, no signs disappearing)-- 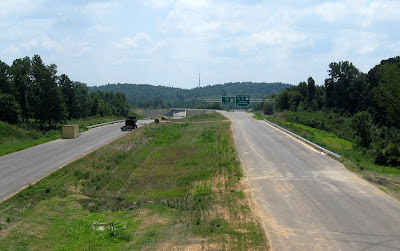 This section appears to just need some lines painted on it to be completed. There are some additional photos in my previous post.

The bottom line is that there appears much still needs to be done along the freeway to be open on time in late October. NCDOT reports that, as of July 31, the project is 89.1% complete. But this percentage is based on total cost and may not reflect new costs from the soil stabilization projects that were going on the day of our visit, or from other problems. Bill and I agreed that if the weather stays dry, for the most part, a November opening date would not be unreasonable. However, NCDOT seems less optimistic. In their latest Progress Report for the I-74 contract, the project completion date has been moved back to December 31 (2012). I-74 could technically open before the road is officially complete (the prior section from Business 85 to Cedar Square Rd was not officially complete until a few months after the highway opened), so I still am hopeful I can celebrate graduation in December with a trip down I-74 to I-73/US 220. Meanwhile, others are free to check on the freeway's progress.

My thanks again to Bill Travers for his keeping track of what's been going on with I-74 (and I-73/I-74 through Asheboro which currently has a October 16 completion date) in the Randolph County area.