By Bob Malme July 11, 2012
Took an early Sunday morning trip to check out progress in the last month in completing the first segment of the Triangle Expressway from NC 55 to US 64 now due to open August 1. With the aid of an iced coffee break at Dunkin' Donuts, I actually got to explore further south before the thermometer got to high.

The first part is basically a repeat of last month's journey, so I'll just include any highlights of what's new:
NC 55-The new exit signs that were stored in the median in June have been put up. Here is a comparison of the new (overhead) and old: 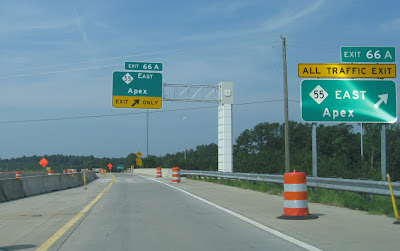 The ramps had received what looked like their last layer of pavement. Lane striping and traffic signal work remains to be completed. 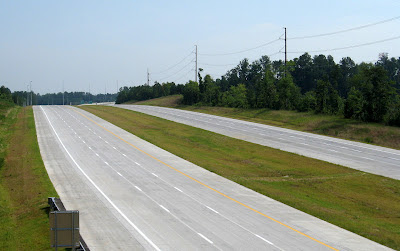 Panther Creek High School is behind the trees to the right. 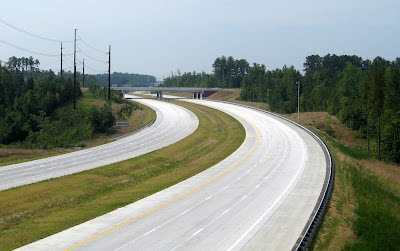 Three lanes in each direction are marked, there also appears to be a traffic camera set up along the southbound lanes.


Green Hope School Road
Similar progress here, with auxiliary and regulatory signage appearing along with lane markings since the first week of June-- 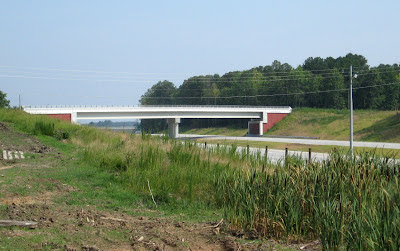 This is a closeup of the Green Hope School Rd bridge over the TriEx. Many people in a TriEx column this week in the Raleigh paper said bridges like this are 'too fancy' especially with the steet name carved into the right abutment. Of course, many of these were the same people saying they would never drive a toll road anyway. Here's the view south from the bridge with similar progress seen in places to the north-- 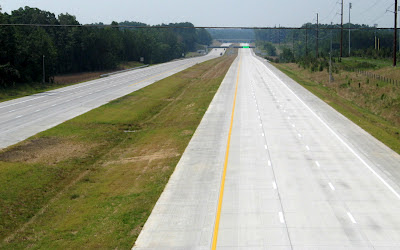 As with the rest of the TriEx, this part is ready for traffic. And has some already... 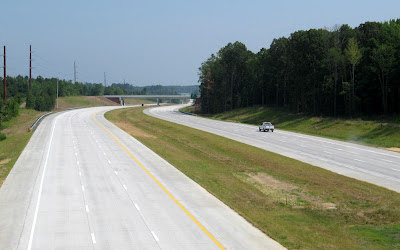 Heading north on a bathroom break (there was a port-a-potty just south of McCrimmon Parkway)?

Green Level West Interchange
I had not gotten this far south since last October. Needless to say, more changes to report. The work on the bridge has been completed, but most lanes are still blocked off by barrels. Approaching from the west-- 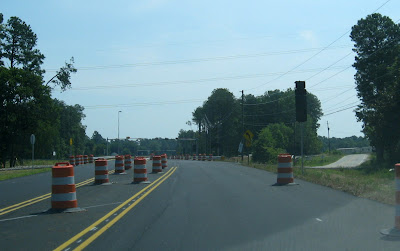 Wonder what all is hiding behind the black wrap on the sign post? There will be five lanes on the bridge, the middle for turning. Each ramp has its own traffic signal. The signals are turned on their side, I assume this will not be the configuration when the ramps open. Here's a narrow view looking south to make sure you can spot a NC 540 mile marker-- 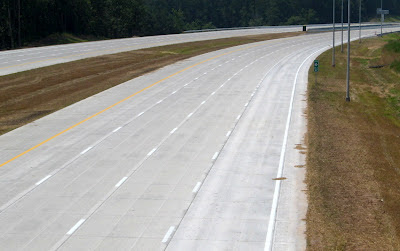 In an unremarkable coincidence, the number on the mile marker, 62, matches the future exit number for the Green Level West interchange. A wider view looking south-- 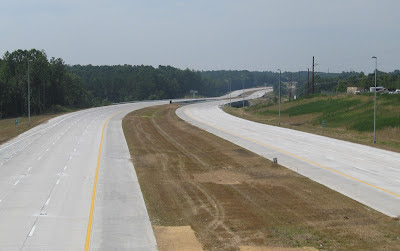 In addition to lane markings, there are lights put up in the areas surrounding the interchange ramps. Speaking of, this is interesting-- 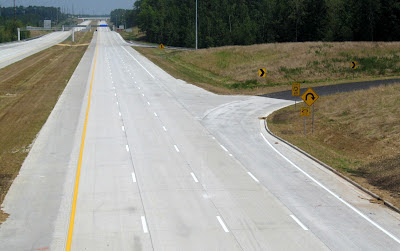 Notice how much of a sharp turn is need for traffic leaving NC 540, and the 25 MPH recommended speed. Was it too expensive to place the on-ramp before the bridge? Can't say they're overspending on this design. Here's a wider view to the north looking back toward Green Hope School Rd and the USA Baseball complex on the left-- 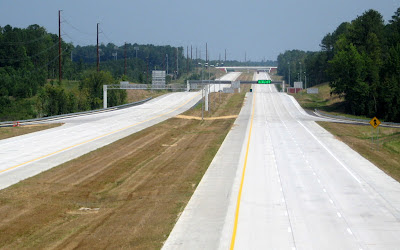 Fortunately, the northbound on-ramp only requires a standard left or right turn-- 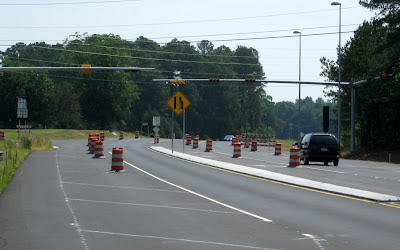 Though you may notice the signs indicating the roadway rapidly goes from five lanes to two just beyond the bridge. Future congestion point?

The US 64 Interchange
Since I last visited in October they completed the paving and most of the landscape work around the TriEx/US 64 and Kelly Road interchanges. Here's the view approaching US 64 on NC 540 from the Jencks Road bridge (it had been complete in August but lack of landscaping made it hard to stop for photos)-- A closeup of the future off-ramp helps reveal the exit numbers for the US 64 interchange, 59A/B-- 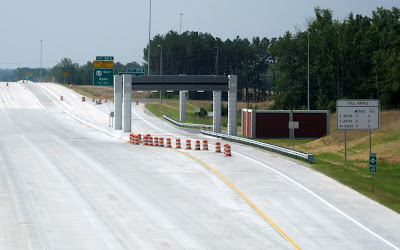 Mile marker 60 can be seen on the right. Still need to post the toll rates. Here's the view looking back toward Green Level West-- 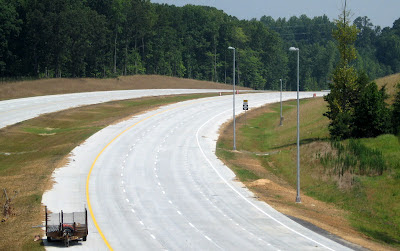 Note the equipment needed for more landscaping work, but a complete Toll North NC 540 sign assembly on the right. The scene approaching the interchange on US 64 West looks like this-- 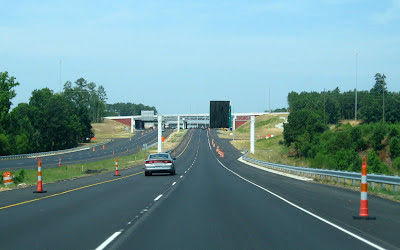 Again the overhead signs are up, but covered, unlike other exits on US 64 west of Raleigh, these (for the TriEx and Kelly Road) have no exit numbers. A closeup of the 'fancy' TriEx bridge over US 64-- 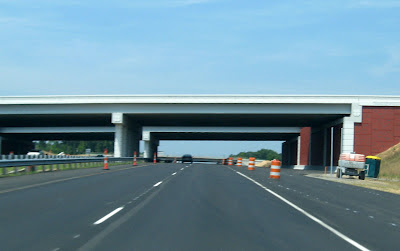 The bridge to carry Kelly Road over US 64 is not complete, here's a view of the current construction looking north-- 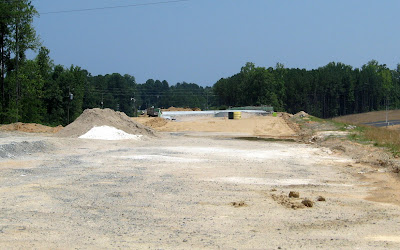 Apex Barbecue Road
I managed to get down to view construction progress of the next section (US 64 to NC 55 in Holly Springs) at Apex Barbecue Road. A new bridge has recently been opened. You can tell in this view north of the bridge where they were able to grade the TriEx roadbed before the bridge was completed-- 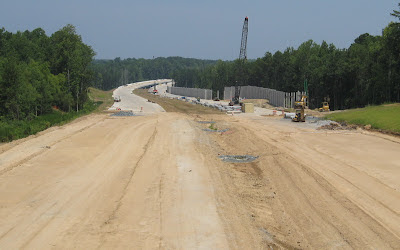 This is one of the few places where they are constructing noise barriers. This is Apex, not Cary. A view to the south-- 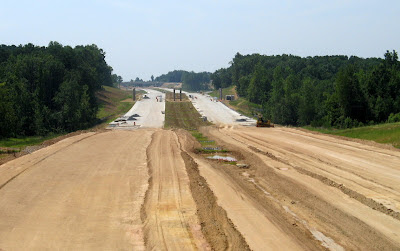 Again, you can see where they only recently began to grade the roadbed after the bridge was open. The next exit south is for Old US 1, but the road is still closed, and I didn't feel like walking a long way in the heat. The final shot then was of the new Apex Barbecue Rd bridge and new traffic signals at the Kelly/Apex Barbecue intersection-- 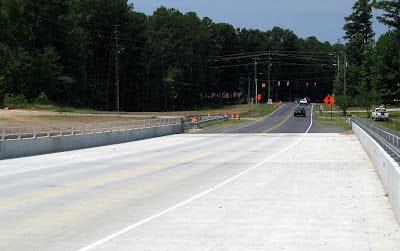 Hopefully, aided by the open TriEx north of US 64, I will be able to get to places further south toward Holly Springs in early August.