By Bob Malme July 30, 2012
I took another I-73/74 Trip this past Saturday. Having visited the Randleman and Asheboro areas a couple times, I thought this trip should cover the southern part of the corridor from Rockingham east. Perhaps getting as far as to view progress on the US 74/NC 242 interchange project, which according to the NCDOT Contruction Progress Report was more than 99% complete on July 15. With this destination in mind I headed south on NC 751 to its end at US 64, then continued straight through the intersection to eventually connect to US 1 South.

Where There's Smoke....
I made good time on US 1 through Sanford and onto the Vass Bypass. (Will they ever upgrade this to a complete freeway bypass without interchanges mixed with the occasional at-grade intersections? I know they were hurrying to complete this for the US Open, will another one have to come to fully complete this?) Just after the NC 24-27 interchange I began hearing a strange noise from the back of my car. I planned to pull over at the next interchange/intersection to check it out when I started seeing smoke out my rear view mirror. Seeing enough NASCAR races to know smoke often leads to fire I decided to pull off the road right away. When the grass shoulder I stopped on did not catch fire, I figured I would not have abandon the car and it would be safe to check out the problem. Turns out the passenger side rear tire was completely shredded. When all the air was out the contact with the road was enough to start the tire smoking, fortunately I pulled off before any combustion took place. I had programmed into my cell phone the number for AAA assistance and was able to get a service truck to come within 30 minutes to remove the old tire and put my spare on for no cost. (Thanks). The tow truck driver gave me the name of a Ford dealer in Southern Pines I could go to get a new tire put on. I was able to get there on the spare and have a new tire (they did not have the same brand as the failed tire, which did not bother me) installed in about an hour. Thankful I survived my first tire blowout unscathed and only out $150 for the new tire, I decided to head back towards Durham instead of continuing south.

Change of Plans
I decided though, since only 20 miles from Candor, I would get a look at some of I-73/74 anyway and take the highway up to Asheboro then take US 64 back east. First I had to get out of Southern Pines on NC 211/US 15-501. NC 211 from Pinehurst to Candor is being widened into a divided 4-lane roadway. Should be a nice highway in a year or two. Getting to Candor, I remembered I had never took a photo of these I-73/74 signs: 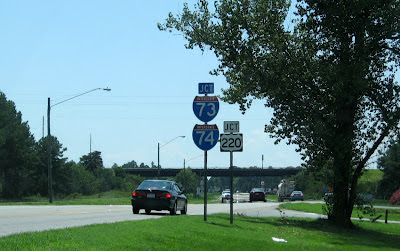 These are originals, dating from the 1990s. The NC 24-27 interchange features shields with different fonts: 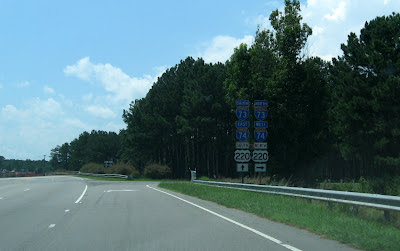 The only similar shields I've seen are south of Asheboro. The section between Candor and Ether is not interstate standard, as you may surmise from the photo below: 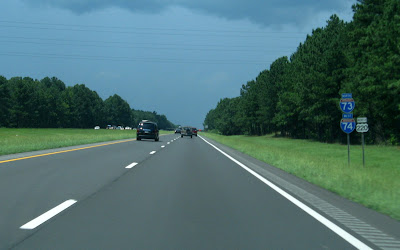 NCDOT got this portion signed as an interstate because they had a project funded to widen the shoulders along this section in 1999, then 2001, then... The project was unfunded in the last State TIP document. Also substandard are the exit signs along this stretch: 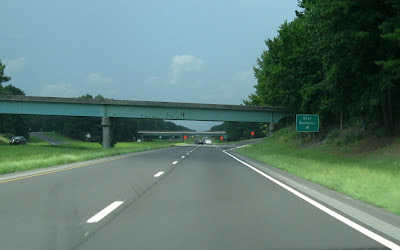 NCDOT does have plans, however, to replace this signage (and all signage up to Asheboro) during the Summer of 2013. The exits will also receive I-73 milepost numbers at the same time. A repaving project (beginning in the distance of the photo above) that is replacing the original asphalt along the original section of I-73/74 up to Asheboro, is almost complete.

Asheboro Widening Update
At the completed southern end of the project, this is the exit gore sign for renumbered Exit 68: 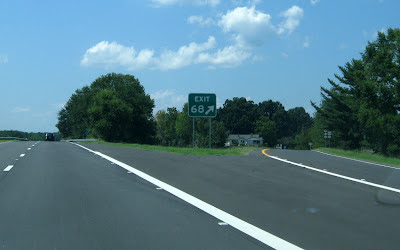 This what I call a 'strong exit number' on this sign vs. the 'wimpy' ones put on I-74 exits east of High Point. Here's a correct new (and huge) I-73/74/US 220 sign assembly heading north just after the exit: 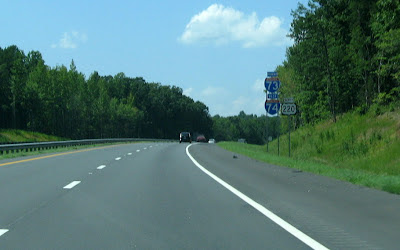 I decided to continue on US 220 north of US 64/NC 49 exit while I was there to check on construction progress. There has been progress in installing the center median barriers, with almost  the whole 5 mile section, with the exception of around the NC 42 exit, being complete. Here's the view northbound just after the US 64/NC 49 exit: 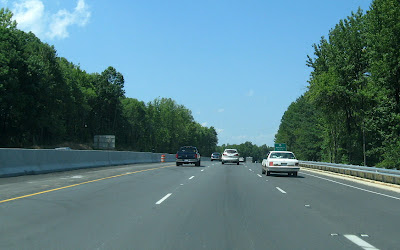 Most of the remaining work had to do with the left-lane NC 42 interchange: 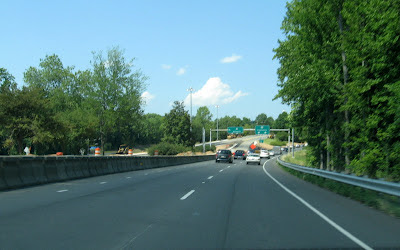 Which was closed heading northbound to facilitate completion. A view of the Spero Road interchange area provides a view of what a completed new interchange looks like: 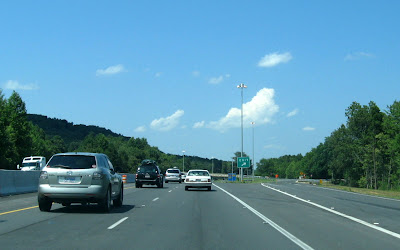 There are new acceleration and deceleration lanes along with interchange lighting. The only remaining task in this area is new exit signage (complete with numbers).

The I-74 / I-73 Interchange
Work is almost completed in building the interchange between US 220 (Future I-73) and I-74, along US 220 anyway. Work has been completed in placing new signage for the exit which is due to open in November. The first sign at 2 miles away is a 'California' type overhead assembly, covered over: Things get more interesting approaching within one mile of the future interchange. First signs have been put up for the previous exit, Pineview Street: 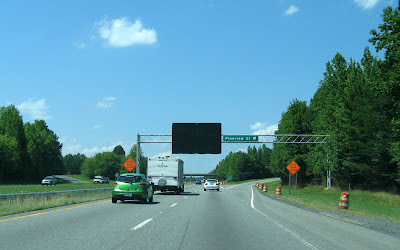 Notice the lack of an exit tab, the current exit has no number and they may not be numbering exits north of Asheboro, for now.  Thanks to NCDOT jumping the gun, we know that I-73 will no longer be a future route after the I-74 interchange opens: 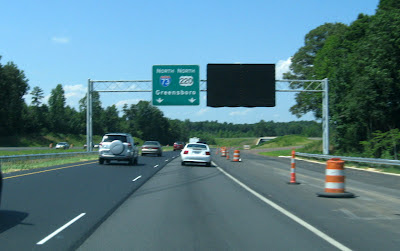 NCDOT has permission from the FHWA to sign US 220 from Greensboro to Asheboro as I-73 once the Asheboro reconstruction project is complete. It appears they plan to do just that. There's another surprise after the I-74 interchange. Overhead signage for the next exit has been put up as well: 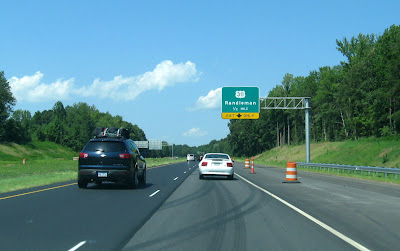 The sign is for US 311 Randleman. But isn't US 311 to run with I-74? Not south/east of the interchange with the Current US 311 being built for I-74 in Sophia. RFP documents state the new freeway is to be I-74/US 311 from Cedar Square Road to the US 311 interchange, but only I-74 between there and US 220 (I-73). Why keep US 311 on the last 2+ miles of its existing alignment? Perhaps residents and businesses in the area wanted to remain on a US route. Perhaps NCDOT saw some advantages to encourage traffic heading east on I-74 heading to Randleman to exit in Sophia. Reducing the traffic counts allowed NCDOT to scale back its planned flyover ramp from I-74 east to I-73 North to a cheaper cloverleaf. Of course, this could all be temporary signage... Another photo: 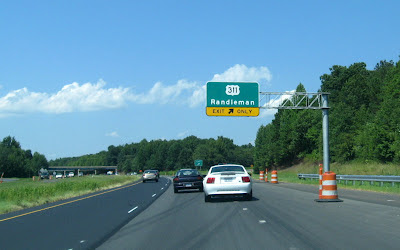 Why no direction for US 311 since it ends here and only goes north? Many locals refer to the road that heads east to Business 220 as US 311. Also Randleman is to the east so 'US 311 North Randleman', might be confusing.

New Signage Along I-74
Further progress has been made in installing signage along the I-74 freeway approaching I-73/US 220. Here's the latest view from the Heath Dairy Road Bridge: 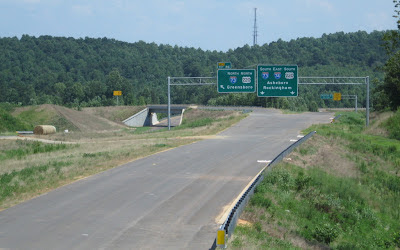 I-73 and US 220 have appeared on the North, Greensboro sign. Also notice in the distance on the Southbound on-ramp a sign for the Pineview Street exit, and northbound a warning sign to slow down around the cloverleaf ramp to I-73 North. A closer view of the exit signs: 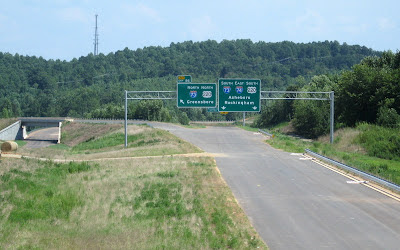 US 311 Interchange
Speaking of, here's the future graded on and off-ramps to and from I-74 West. It appears that there has been some excavating going on nearby: 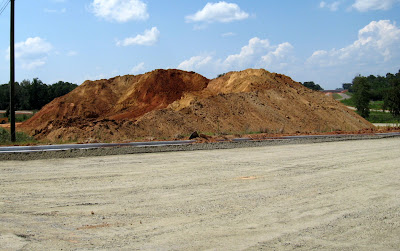 The dirt is probably taken from the area of the two bridges further west, one can be seen here: 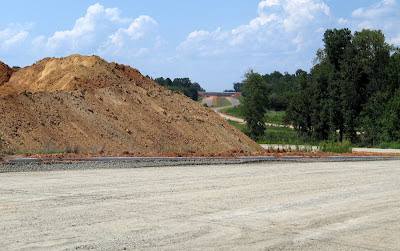 Confirmation will have to come in the next blog entry. I am taking one last visit to the I-74 construction area on Wednesday morning and hope to provide photos of progress around the Branson Davis Road area.

Anonymous said…
Yes, thanks for the update. Just got from Myrtle Beach and see great progress in North Carolina. Too back South Carolina can't get on board.
1:26 PM

Anonymous said…
when will the next update take place. will it be before december 31.
6:21 PM